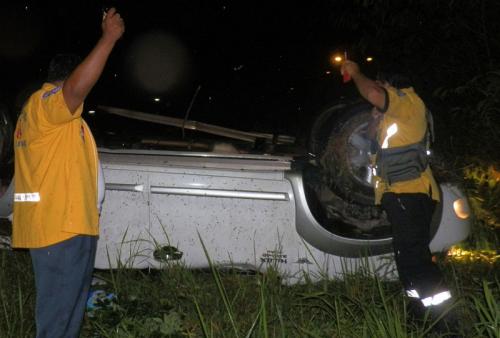 PHUKET: Two youngsters, a 12-year-old boy and an 18-year-old woman, are in hospital with serious head injuries after the pickup truck they were travelling in flipped and rolled down an embankment while returning to Phuket from Krabi last night.

Natchanon Kaewrua, 12, and Jinta Petchkrua, 18, were thrown out of the back of the pickup when driver Somchai Kaewrua, 48, lost control of the vehicle at a sharp curve at Baan Suan Maphrao, Lt Col Watcharin Jiratthikanwiwat of the Tah Chat Chai Police explained.

“They were travelling back to their home in Rawai after visiting relatives in Krabi when the accident happened. It appears Mr Somboon lost control of the vehicle as the road was slippery from rain,” Col Watcharin said.

Altogether, eight people travelling in the pickup were injured in the accident, including eight-month-old baby Paraway Somboon.

Miraculously, the six inside the vehicle were thrown clear of the pickup truck as it continued to roll multiple times into the field beside the road.

“None of them were wearing seat belts. When we arrived at the scene, none of them were in the pickup truck. They were all out side and the pickup was upside down with its roof flattened,” one rescue worker told the Phuket Gazette.

“However, Natchanon and Ms Jinta suffered serious injuries as both of them hit their heads on the road when they thrown from the vehicle,” he added.

The extent of other injuries that Natchanon and Ms Jinta suffered was not reported.

All eight were rushed to Thalang Hospital by Kusoldharm Foundation rescue workers.

However, hospital staff declined to reveal any details of the current condition of any of the eight persons involved in the accident.

Dubious Dane fined, sentenced but not kicked out of Phuket