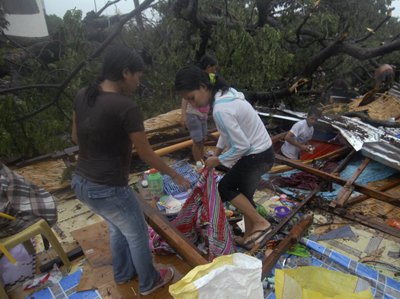 PHUKET: Rescue workers found a 77-year-old man alive today who had survived on coconuts for two days after a powerful typhoon ravaged the south of the Philippines killing 332 people, with hundreds missing.

A group of rescue volunteers lifted Carlos Agang to safety after they found him, in a tattered shirt with a fractured leg and bruises, clinging to a boulder by a river in New Bataan town in Compostela Valley, the province worst hit by typhoon Botha.

“I can’t believe it. I didn’t expect to see people survive two days after they were swept by flood and mud,” fire volunteer Mark Roman Jumilla told Reuters.

“For two days, he survived on coconut and water. He lost his family when floodwaters swept a temporary shelter area where he and his family sought refuge,” Jumilla said.

Rescuers also found a pregnant woman on the other side of the river with her one-year son after escaping floods that swamped their house after typhoon Bopha hit land on Tuesday.

“It happened so fast. Water came rushing to us while we were leaving our house to move to safer grounds,” Lenlen Medrano, 23, told Reuters as she was being carried by soldiers in a stretcher.

“I prayed hard over and over until we found ourselves on the riverbank,” she added.

A Reuters photographer saw four bodies near the spot where Agang was rescued. The river’s current was strong, making it hard for rescue teams to reach other survivors.

Typhoon Bopha, with central winds of up to 115 kph (71 mph) and gusts of up to 145 kph (90 mph), was moving west-northwest of the central Philippines and was expected to be over the South China Sea tomorrow.

The head of the national disaster agency said 332 people were killed and 379 were missing after Bopha triggered landslides and floods along the coast and in farming and mining towns inland in the southern Mindanao region.

About 20 typhoons hit the Philippines every year, often causing death and destruction. Almost exactly a year ago, Typhoon Washi killed 1,500 people in Mindanao.