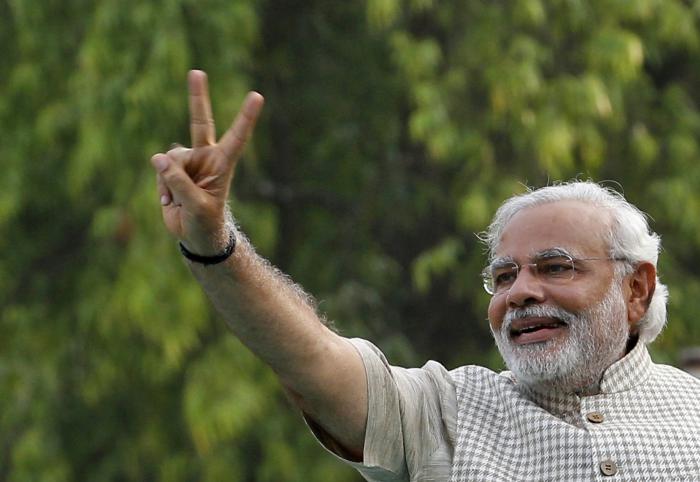 PHUKET: Narendra Modi fought back tears in an emotional first address to his party in India’s colonnaded parliament house on Tuesday, after the Hindu nationalist swept to power in an election that has changed the face of politics in the country.

Modi will be India’s next prime minister after leading the Bharatiya Janata Party (BJP) to a historic victory in a ballot that ended on Friday. He is likely to take his oath of office to lead the world’s biggest democracy on Monday.

The win handed the BJP its first parliamentary majority and reduced the Nehru-Gandhi dynasty’s ruling Congress party to 44 seats, the lowest ever tally for a party that won India’s independence and has ruled for most of the 67 years since.

Modi, 63, choked up and paused his speech to take a drink of water during his inaugural appearance in the round, colonial-era building.

He addressed BJP lawmakers filling more than half the seats of the lower house with uplifting words that commentators immediately contrasted with the often wooden addresses of his predecessor Manmohan Singh.

“It is proof of the strength of our Constitution that a man from a poor family is standing here today,” said Modi, who sold tea on a railway platform as a child. For the past 12 years, he has governed the state of Gujarat.

“This government (will be) one which thinks of the poor, which listens to the poor, a government which lives for the people,” said Modi, who kissed the steps of the pink sandstone parliament building before his speech.

His comments appeared designed to counter criticism that his record of business-focused government and fast economic growth in Gujarat did not do enough to lift people from poverty.

Congress has traditionally cast itself as India’s champion of the poor and downtrodden.

The United States, which is keen to strengthen what it has termed a “strategic” relationship with India, was quick to extend congratulations to Modi.

“The United States stands ready to work closely with Prime Minister Modi and the new government to promote shared prosperity and strengthen our security,” U.S. Secretary of State John Kerry said in a statement, adding that he looked forward to visiting India soon.

President Barack Obama has called it “one of the defining partnerships of the 21st century,” and in hailing Modi’s poll win last Friday, invited him to visit the White House, even though India’s new leader was barred from visiting the United States less than 10 years ago. [ID:nL1N0O21G8]

Modi was denied a U.S. visa in 2005 under a 1998 law barring entry to foreigners who have committed “particularly severe violations of religious freedom.”

In 2002, when Modi had just become Gujarat’s chief minister, more than 1,000 people, mostly Muslims, were killed in sectarian riots in the state. Modi has denied any wrongdoing and India’s Supreme Court ruled in 2010 he had no case to answer.

Analysts say a U.S. visit could come as soon as September.

Modi faces a huge task in meeting the sky-high expectations of India’s 1.2 billion people, who hope he can drag the country from economic torpor, tackle corruption and cut red tape in order to create enough jobs for its burgeoning youth.

With thunderous applause and shouts of “Long live Modi!” the 282 BJP members, who make up a comfortable majority in the 543-seat house, officially chose him as their parliamentary leader, one of several formalities before he is sworn in.

Modi was later due to visit President Pranab Mukherjee, who has little political power, but as head of state, has the task of formally appointing the prime minister.

The parliamentarians, who traveled from as far afield as the icy Himalayan plateaus and the palm-fronded southern tip of the subcontinent, included dozens who, like Modi, are first-time MPs.

Dressed in clothes ranging from multi-colored Rajasthani turbans to bright saris and white cotton pyjama suits, the members listened as Modi paid homage to party elders he pushed aside in his rise to power.

He also avoided criticism of the outgoing Congress party, saying all of India’s governments had worked for the good of the country.

Party president Rajnath Singh was less conciliatory, saying that Modi’s victory meant the BJP had replaced Congress as the natural party of government in India.

“With pride, we can say that we are members of a party that is now bigger than the Congress in stature. Before the 2014 elections, politics used to be BJP versus Congress, now it’s BJP versus the others,” said Singh.