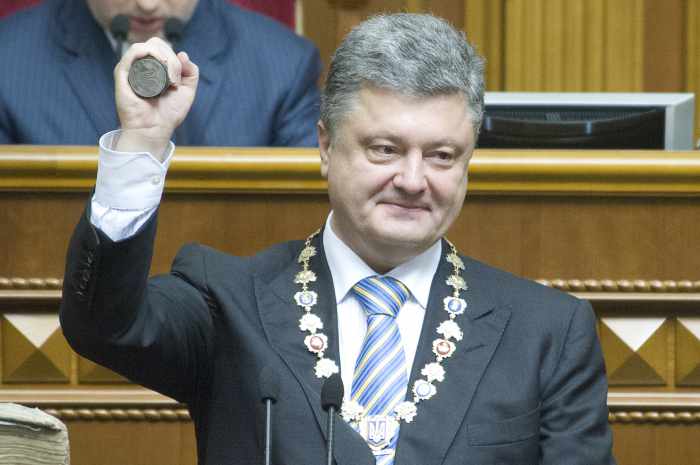 PHUKET: Ukraine said on Monday it had reached a “mutual understanding” with Moscow on parts of a plan proposed by President Petro Poroshenko for ending violence in the east of the country.

Kiev gave no details and Russia did not comment directly but two days of talks, following a brief encounter in France last week that broke the ice between Poroshenko and Russian President Vladimir Putin, have given momentum to peace moves.

German Foreign Minister Frank-Walter Steinmeier said in a statement released in Berlin that there was “some faint light at the end of the tunnel” in the Ukraine conflict for the first time in months.

The Ukrainian Foreign Ministry said in a brief statement in Kiev that Russian and Ukrainian representatives had met three times in the past two days to discuss Poroshenko’s plan to end an insurrection by pro-Russian separatists in the east.

“As a result of the work, the sides reached a mutual understanding on key stages of the implementation of the plan and on a list of priorities which will contribute to a de-escalation of the situation in the Donetsk and Luhansk regions of Ukraine,” it said.

The talks are being mediated by the Organisation for Security and Cooperation in Europe, the Vienna-based security and human rights watchdog, but almost no details of Poroshenko’s plan or the talks have been made public.

It was not even clear who took part in Monday’s meetings, although the Ukrainian leader was present at Sunday’s talks and said that the violence must end this week.

“Each day when people die, when Ukraine pays such a high price, is inadmissible for me,” his office quoted him as saying.

Poroshenko, who was sworn in on Saturday, has called for daily meetings of the “contact group” and the Foreign Ministry said the talks would continue.

Scores of people have been killed since April in east Ukraine, including separatists and government forces, and Russian speakers there are suspicious of Poroshenko and the new, pro-Western government in Kiev.

But fighting has ebbed in the past few days, despite renewed shelling of rebels in the city of Slaviansk, and Russia and Ukraine signalled last week they hoped to resolve a dispute over the price Kiev pays for Russian gas and its gas debts.

Failure to secure a deal, though, would fuel tension again because Moscow has threatened to turn off the taps on Tuesday if there was no agreement at the latest meeting in Brussels.

As the EU gets about a third of its gas imports from Russia, almost half of it via Ukraine, its member states could also suffer from supply disruptions.

In Finland, Russian Foreign Minister Sergei Lavrov said the government in Ukraine and the EU had to work more constructively to end the crisis in Ukraine, but also expressed some hope.

“I believe that the newly-chosen Ukrainian President Poroshenko’s contacts (with Western leaders) can lead to violence being stopped and internal dialogue beginning,” he told a news conference with Finnish Foreign Minister Erkki Tuomioja.

Putin and Poroshenko had 15 minutes of talks during a World War Two anniversary event in France last week, their first meeting since the crisis flared in February after the overthrow of Ukraine’s Moscow-leaning president, Viktor Yanukovich.

Yanukovich fled to Russia, which annexed the Crimea region from Ukraine a month later, deepening Moscow’s worst standoff with the West since the end of the Cold War and the collapse of the Soviet Union in 1991.

Poroshenko has set course towards Europe since being elected president on May 25, and stepped up a military operation to take back buildings seized by the separatists in towns and cities in mainly Russian-speaking east Ukraine.

Germany’s Steinmeier, who will meet Lavrov and the Polish foreign minister in St Petersburg on Tuesday, said he would “sound out how the positive momentum of recent days can be used to make the process of de-escalation irreversible”.