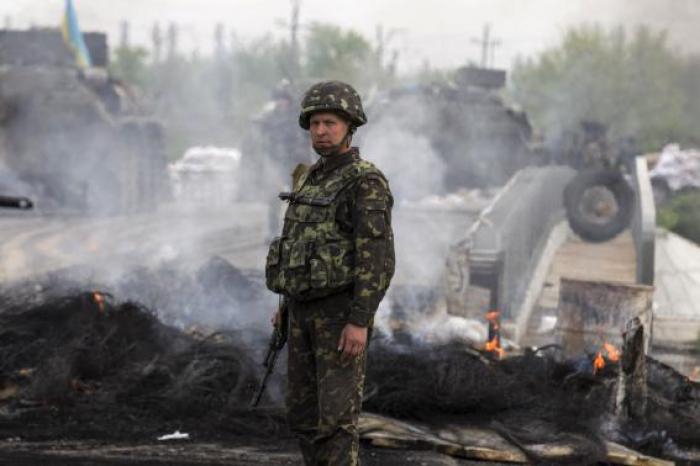 PHUKET: Ukrainian forces attacked the rebel-held city of Slaviansk before dawn on Friday and pro-Russia separatists shot down at least one attack helicopter, killing a pilot, in a sharp escalation of the conflict.

Describing the use of anti-aircraft missiles as proof of the presence of Russian special forces in the town that has become the military stronghold of the pro-Moscow movement, Ukrainian officials said Slaviansk was “tightly surrounded” and called on separatist leaders to release hostages and surrender.

Reuters journalists in the city of 130,000 heard shooting from shortly after 4 a.m. (0100 GMT) and saw a military helicopter open fire. Ukrainian troops could be in seen in armoured personnel carriers in a southern suburb.

The SBU security service said one military Mi-24 helicopter gunship had been shot down, killing one airman while a second had been taken prisoner by the rebels.

It said a second Mi-24, which normally would have a crew of two, was flying in tandem and had to make a forced landing. A third helicopter, carrying medics, was hit and a medic wounded.

Vyacheslav Ponomaryov, the self-declared mayor of the town, was quoted by Russia’s Interfax news agency as saying two helicopters had been shot down and one pilot had been detained.

The SBU said one helicopter was hit by shoulder-launched anti-aircraft missiles – evidence, it said, that “trained, highly qualified foreign military specialists” were operating in the area “and not local civilians, as the Russian government says, armed only with guns taken from hunting stores”.

Russia denies involvement but has massed troops on the border and threatened to intervene to protect the Russian-speaking majority in eastern Ukraine from what it calls an illegitimate, Western-backed government in Kiev. Alarmed Western powers believe President Vladimir Putin is set on asserting Moscow’s influence over its former Soviet neighbours.

Armed groups seeking union with Russia have seized a number of government buildings in towns in eastern Ukraine. The action in Slaviansk appeared to mark the heaviest military response by Kiev since it tightened a cordon around the city a week ago.

The militants in Slaviansk are holding a number of local people and seven foreign military observers, four of them German, from the European security agency the OSCE.

On his Facebook page, Interior Minister Arsen Avakov posted: “The goal of our anti-terrorist operation and, at the same time, our demands to the terrorists are simple:

“Free the hostages, lay down weapons, vacate administrative buildings and get municipal infrastructure back to normal.”

He urged local people to stay indoors and said Ukrainian forces, from the Interior Ministry, National Guard and the armed forces, had orders not to fire on residential buildings.

Support for the separatist movement is patchier in eastern Ukraine than it was among the majority ethnic Russian population of Crimea, which Moscow seized and annexed in March. However, many are fearful of the new authorities in Kiev and have little faith in Ukraine after 23 years of post-Soviet independence marked by rampant corruption and poor living standards.

“Shells came into my garden,” said one local man, Gennady. “They say that they have come to defend us. But who from?” he said of the Ukrainian forces. “Civilians must stop them.”

The clashes around Slaviansk came only hours after Russia staged a huge May Day parade on Moscow’s Red Square on Thursday – its first since the Soviet era – with workers holding banners proclaiming support for President Vladimir Putin after the seizure of territory from neighbouring Ukraine.

On Wednesday, Ukraine’s leaders – who came to power in February when the previous Moscow-backed president was toppled after months of protests – conceded they were “helpless” to counter the fall of government buildings and police stations in the Donbass coal and steel belt. Donbass is the source of up to a third of Ukraine’s industrial output.

Separatists had also stormed the prosecutor’s office in the city of Donetsk on Thursday, throwing rocks, firecrackers and teargas at riot police defending officials they accused of working for the Western-backed government in Kiev.

Rebels in the city, capital of a province of 4.3 million, have declared a “People’s Republic of Donetsk” and called a referendum on secession for May 11, undercutting a planned presidential election in Ukraine two weeks later.

Having seized buildings in the capital of the easternmost province, Luhansk, on Tuesday, gunmen took control at dawn on Wednesday in the nearby towns of Horlivka and Alchevsk.

The International Monetary Fund warned that if Ukraine lost territory in the east it would have to redesign a $17 billion bailout of the country, probably requiring additional financing.

Citing the situation in the east, acting Ukrainian President Oleksander Turchinov has signed a decree reinstating compulsory military service for men aged between 18 and 25.

The Kiev government, along with its Western allies, accuses Moscow of orchestrating the uprising. The United States and European Union have imposed sanctions in response to Russia’s annexation of Crimea and involvement in eastern Ukraine.

Kiev ordered the expulsion of Russia’s military attaché on Thursday, saying it had caught him “red-handed” receiving classified information from a colonel in Ukraine’s armed forces on the country’s cooperation with NATO.

A spokeswoman for the SBU said the attaché had been handed over to the Russian embassy and ordered to leave, although she was not sure if he had left yet.

The intervention in Ukraine has been enormously popular in Russia. One opinion poll on Wednesday showed 82 percent support for Putin, his highest rating since 2010.