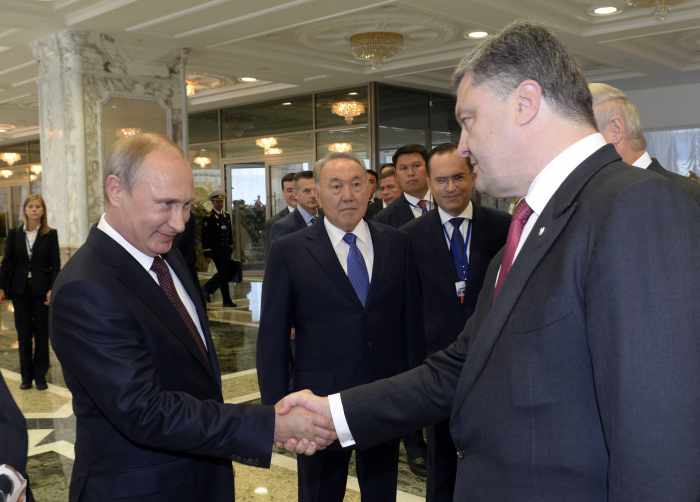 PHUKET: Ukraine accused Russia of launching a new military incursion across its eastern border on Wednesday, as hopes quickly faded that Tuesday’s talks between their two presidents might mark a turning point in a five-month-old crisis.

Accusations of direct Russian support for pro-Russian separatists in Ukraine have prompted Western governments to impose sanctions on Moscow, despite its denials, and fanned tensions with NATO to levels not seen since the Cold War.

Ukrainian military spokesman Andriy Lysenko said a group of Russian soldiers had crossed the border in armoured infantry carriers and a lorry and entered the town of Amvrosiyivka, not far from where Ukraine detained 10 Russian soldiers on Monday.

Ukraine’s Security Services also said in a statement it had detained another Russian soldier in the east of the country who has confessed his unit provided military support to separatist rebels.

Lysenko said fighting in two other towns, Horlivka and Ilovaysk, had killed about 200 pro-Russian rebels and destroyed tanks and missile systems. Thirteen Ukrainian service personnel had been killed in the past 24 hours and 36 had been wounded.

No comment was immediately available from the Russian defence ministry on the alleged incursion. Russia denies sending weapons and soldiers to help the rebels, and says the men captured on Monday had crossed an unmarked section of the border by mistake.

Late-night talks in the Belarusian capital Minsk had appeared to yield some progress towards ending a war in which more than 2,200 people have been killed, according to the U.N. – a toll that excludes the 298 who died when a Malaysian airliner was shot down over rebel-held territory in July.

Ukrainian President Petro Poroshenko said he would work on an urgent ‘road map’ towards a ceasefire with the rebels. Russia’s Vladimir Putin said it would be for Ukrainians to work out ceasefire terms, but Moscow would “contribute to create a situation of trust”.

But Wednesday’s new accusations from Ukraine made clear that the poisonous dispute over Russia’s role remained unresolved.

In a telephone call with Putin, Germany’s Angela Merkel said reports of a new Russian military incursion into Ukrainian territory had to be cleared up, a spokesman for the chancellor said in a statement.

“The latest reports of the presence of Russian soldiers on Ukrainian territory must be explained,” said Merkel’s spokesman Steffen Seibert. “She emphasised Russia’s major responsibility for de-escalation and watching over its own frontiers.”

“I think there’s a shift here that we may be witnessing, very recently, from largely covert, ambiguous, deniable support to what appears increasingly to be flat-out, overt and obvious (support) and with the only form of ambiguity being that the Russians … claim it is not happening,” said the diplomat, speaking to reporters in Brussels on condition of anonymity.

He said increasingly sophisticated weapons systems were now in the area, including the SA-22 surface-to-air missile, which is more advanced than the SA-11 system that many Western officials suspect rebels used to bring down the Malaysian jet.

White House spokesman Josh Earnest said the military movement “would be consistent with the other kinds of destabilising military activities that Russia has pursued in Ukraine”.

Ukraine’s State Security services said in a statement late on Wednesday that it had detained a private in Ukraine’s easternmost Luhansk Province from a unit stationed in Russia’s Rostov region near the border with Ukraine.

The statement said that when questioned, he said his military unit transfers military equipment and ammunition including multiple rocket launchers BM-21 Grads as well as armoured personnel carriers to the rebels.

Fighting in the east erupted in April, a month after Russia annexed Ukraine’s Crimean peninsula in response to the toppling of a pro-Moscow president in Kiev.

The crisis has prompted the United States and EU to impose sanctions on Russia’s finance, oil and defence sectors, and Moscow has hit back by banning most western food imports. The trade wars threaten to tip Russia into recession and strangle economic recovery in Europe.

Russian Foreign Minister Sergei Lavrov said Moscow was not looking for a further escalation of trade tensions. “We have no interest in a confrontation or in whipping up a spiral of sanctions,” he told an audience of students.

The next step would be for a ‘Contact Group’, comprising representatives of Russia, Ukraine, the rebels and the Organisation for Security and Cooperation in Europe, to meet in Minsk, he said without giving a time frame.

But Ukrainian foreign policy adviser Valery Chaly told reporters in Kiev that Poroshenko’s declaration on a ceasefire road map did not mean an immediate end to the government’s military offensive against the rebels.

“If there are attacks from the terrorists and mercenaries, then our army has the duty to defend the people,” he said.

A crowd of several hundred gathered outside the presidential administration building in Kiev to demand reinforcement for Ukrainian forces in Ilovaysk, a town in Donetsk region, where government troops have been encircled by rebel units.

“We want to show the current authorities who came to power thanks to active citizens that we will not allow them to stand by as those people die who were brave enough to take up weapons and defend our country,” Kiev resident Mykola Vasyk said.

Earlier, Ukrainian military spokesman Lysenko said units were on the defensive in Ilovaysk, but that some equipment and support had reached the troops.

A rebel leader, Oleg Tsaryov, wrote on Facebook that he welcomed the outcome of the Minsk talks, but the separatists would not stop short of full independence for the regions of eastern Ukraine they call Novorossiya (New Russia).

He said he saw “a real breakthrough” in Putin’s offer to contribute to the peace process.

But he added: “It must be understood that a genuine settlement of the situation is only possible with the participation of representatives of Novorossiya. We will not allow our fate to be decided behind our back…

“Now we are demanding independence. We don’t trust the Ukrainian leadership and don’t consider ourselves part of Ukraine. The guarantee of our security is our own armed forces. We will decide our own fate.”

He said he knew of Russian plans to halt gas flows this winter to Europe, up to half of which are shipped via Ukraine. Russia’s energy minister called the assertion groundless.

Russia cut off gas supplies to Ukraine in June in a dispute over pricing and debt, but Putin said after Tuesday’s talks that he and Poroshenko had agreed to resume discussions.