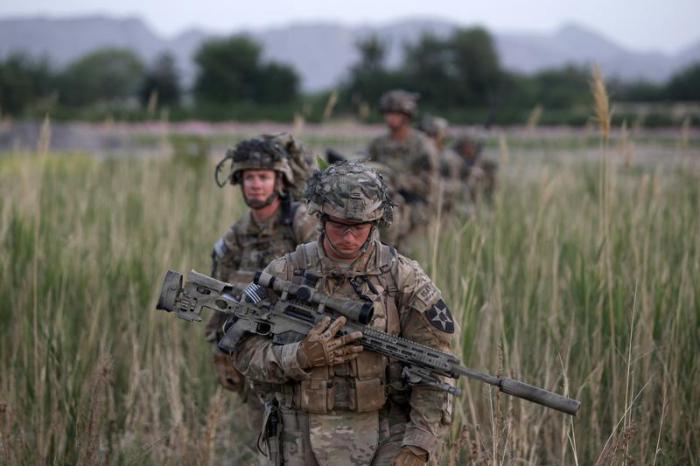 U.S. force in Afghanistan may be cut to less than 10,000 troops
Reuters / Phuket Gazette

PHUKET: The number of U.S. troops in Afghanistan may drop well below 10,000 – the minimum demanded by the U.S. military to train Afghan forces – as the longest war in American history winds down, Obama administration officials briefed on the matter say.

Since Afghanistan’s general election on April 5, White House, State Department and Pentagon officials have resumed discussions on how many American troops should remain after the current U.S.-led coalition ends its mission this year.

The decision to consider a small force, possibly less than 5,000 U.S. troops, reflects a belief among White House officials that Afghan security forces have evolved into a robust enough force to contain a still-potent Taliban-led insurgency. The small U.S. force that would remain could focus on counter-terrorism or training operations.

That belief, the officials say, is based partly on Afghanistan’s surprisingly smooth election, which has won international praise for its high turnout, estimated at 60 percent of 12 million eligible votes, and the failure of Taliban militants to stage high-profile attacks that day.

The Obama administration has been looking at options for a possible residual U.S. force for months.

“The discussion is very much alive,” said one U.S. official who asked not to be identified. “They’re looking for additional options under 10,000” troops.

There are now about 33,000 U.S. troops in Afghanistan, down from 100,000 in 2011, when troop numbers peaked a decade into a conflict originally intended to deny al Qaeda sanctuary in Afghanistan after the September 11, 2001, attacks.

With British and other foreign troops scheduled to depart in lock step with U.S. soldiers, the size of any residual U.S. force could add fuel to a debate in Washington over whether Taliban-led violence will intensify amid the vacuum left by Western forces, as some U.S. military officials expect.

Military leaders, including American General Joe Dunford, who heads U.S. and NATO forces in Afghanistan, has identified 10,000 soldiers as the minimum needed to help train and advise Afghan forces fighting the insurgency, arguing a smaller force would struggle to protect itself.

During a March visit to Washington, Dunford told lawmakers that without foreign soldiers supporting them, Afghan forces would begin to deteriorate “fairly quickly” in 2015. The Afghan air force, still several years away from being self-sufficient, will require even more assistance, he said.

At their current size, Afghan forces will cost at least $5 billion in 2015, a sum far beyond the reach of the Afghan government. The United States has been widely expected to be the largest outside funder for those forces.

The Taliban and other militants have been weakened by more than 12 years of Afghan and NATO assaults, but they still can obtain supplies and plan attacks from Afghanistan’s remote mountain regions and tribal areas of neighbouring Pakistan.

Some analysts are wary of reducing the U.S. presence to less than 10,000 troops.

“If the White House opts to keep a lower number of troops, it will put more pressure on the Afghan forces and run the risk of squandering their recent progress against the Taliban,” said Lisa Curtis, a former CIA analyst and State Department official now with the conservative Heritage Foundation, a think tank in Washington.

A U.S. force significantly below 10,000 might focus almost exclusively on counter-terrorism, tracking militants affiliated with a greatly weakened but resilient al Qaeda insurgency based on the Afghanistan-Pakistan border, officials said.

Debate over the size of a residual U.S. force follows the failure of the U.S. and Afghan governments to finalize a Bilateral Security Agreement (BSA) to authorize a U.S. troop presence in Afghanistan beyond 2014, the deadline for U.S. and NATO troops to conclude their fight against the Taliban.

Results of the recent presidential election may not be known for weeks, or months if runoffs take place. But leading candidates have said they will sign the agreement, which has been on hold because of reservations from current Afghan President Hamid Karzai.

In late February, Obama announced that the United States might seek to sign the deal with Karzai’s successor and possibly keep troops there after 2014 to train and advise Afghan forces and pursue al Qaeda militants.

Some U.S. officials believe Afghan forces will require substantial, hands-on support from foreign troops, in addition to help from the United States.