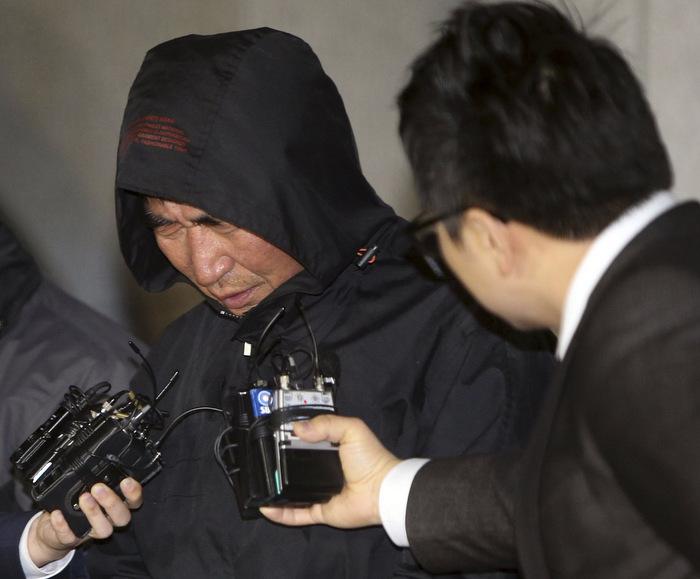 PHUKET: South Korean President Park Geun-hye said on Monday the actions of some crew of a ferry that sank with hundreds feared dead were tantamount to murder, as a four-year-old video transcript showed the captain promoting the safety of the same route.

Sixty-four people are known to have died and 238 are missing, presumed dead, in the sinking of the Sewol ferry last Wednesday. Most of the victims are high school children.

Lee was also charged with undertaking an “excessive change of course without slowing down” while traversing a narrow channel.

Several crew members, including the captain, left the ferry as it was sinking, ahead of the passengers, witnesses have said.

Park said the crew’s desertion was tantamount to murder.

“Above all, the conduct of the captain and some crew members is unfathomable from the viewpoint of common sense, and it was like an act of murder that cannot and should not be tolerated,” she told aides.

Lee, the captain, said in a promotional video four years ago that the journey from the port city of Incheon to the holiday island of Jeju was safe – as long as passengers followed the instructions of the crew.

He also told a newspaper that he had been involved in a sea accident off Japan years before.

The irony of the video is the crew ordered the passengers to stay put in their cabins as the ferry sank. As is customary in hierarchical Korean society, the orders were not questioned.

However, many of those who escaped alive either did not hear or flouted the instructions and were rescued as they abandoned ship.

Of the 476 passengers and crew on board, 339 were children and teachers on a high school outing.

“Passengers who take our ship to and from Incheon and Jeju can enjoy a safe and pleasant trip and I believe it is safer than any other vehicle as long as they follow the instructions of our crew members,” Lee said in the 2010 promotional video, according to transcripts broadcast by regional cable station OBS. He was not referring to the Sewol, which came into service on that route in 2013.

The Jeju Today newspaper interviewed Lee in 2004 when he spoke of close shaves at sea including passing through a typhoon and a previous sinking off Japan.

“The first ship I took was a log carrier vessel and it capsized near Okinawa. A helicopter from Japan’s Self-Defence Force came and rescued me. Had it not been for their help, I wouldn’t be here now.”

The newspaper did not give further details.

I KNOW HOW HE SAID ‘DAD’

Parents of the children missing in the accident in what is likely to turn out to be one of South Korea’s worst maritime disasters sat exhausted from days of grief on Monday, waiting for the almost inevitable news that their loved ones had died.

They have spent all their time since the accident in a gymnasium in the port city of Jindo, taking it in turns to vent their anger at the crew’s inaction and slow pace of the rescue operation.

One of those waiting in the gymnasium was Kim Chang-gu, whose son Kim Dong-hyup is among the missing.

“I dream about him and hear hallucinatory sounds,” he told Reuters. “Somebody told me he was alive but I now have given up. I know how he said ‘Dad’. I keep hearing that.”

Divers are retrieving the bodies at a faster pace and some parents have moved from the gymnasium to the pier to await news.

Others stay put on their mattresses in the gym, where one by one, parents are informed that a body matches a family DNA swab, prompting wailing and collapses.

Two U.S. underwater drones have been deployed in the search for bodies, a coastguard official said. Strong tides hampered operations overnight but the weather was better on Monday.

A clearer picture has started to emerge of the time around the accident after coastguards released a recording of a conversation between vessel controllers and the ship.

Witnesses have said the Sewol turned sharply before it began listing. It took more than two hours for it to capsize completely but passengers were ordered to stay put in their cabins.

According to the transcript, the controllers told the captain to “decide how best to evacuate the passengers” and that he should “make the final decision on whether or not to evacuate”.

Lee was not on the bridge when the ship turned. Navigation was in the hands of a 26-year old third mate who was in charge for the first time on that part of the journey, according to crew members.

Lee said earlier he feared that passengers would be swept away by the ferocious currents if they leapt into the sea. He has not explained why he left the vessel.

Pupils at the children’s school in Ansan, a gritty commuter town on the outskirts of Seoul, set up shrines to the dead and posted messages for the missing.

The vice-principal of the school, who survived the accident, hanged himself outside the gymnasium in Jindo. His body was discovered by police on Friday.