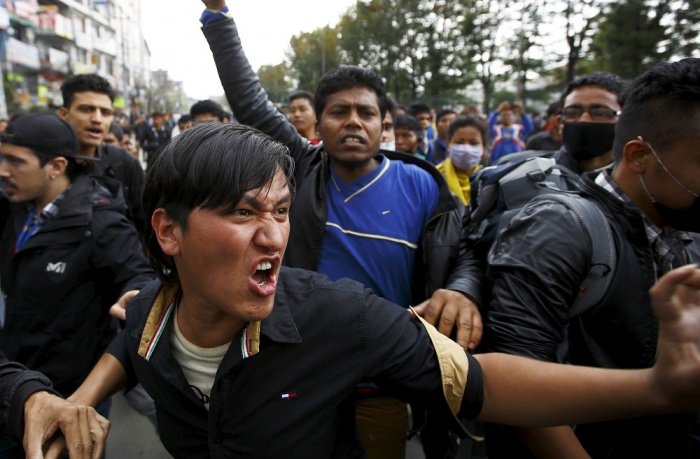 PHUKET: Nepali villagers blocked trucks carrying supplies for earthquake victims on Wednesday, demanding the government do more to help after last week’s disaster left more than 5,200 people dead and tens of thousands homeless and short of food and water.

In the capital Kathmandu, about 200 people protested outside parliament, asking for more buses to go to their homes in remote parts of the Himalayan nation and to hasten the distribution of aid that has flooded into the country but been slow to reach those in need.

In Sangachowk village in one of the worst-hit districts, about three hours by road from the capital, scores of angry villagers blocked the road with tires.

They stopped two trucks headed for the district capital with rice, noodles and biscuits. Later they blocked a convoy of three army trucks with relief supplies, leading to a tense standoff with armed soldiers.

“We have been given no food by the government,” said Udhav Giri, 34. “Trucks carrying rice go past and don’t stop. The district headquarters is getting all the food.”

The government was struggling to fully assess the devastation wrought by Saturday’s 7.8 magnitude quake.

“This is a disaster on an unprecedented scale. There have been some weaknesses in managing the relief operation,” Nepal’s Communication Minister Minendra Rijal said late on Tuesday.

An official from Nepal’s home ministry said the number of confirmed deaths had risen to 5,238 by Wednesday night. Almost 10,350 were injured in Nepal, and more than 80 were also killed in India and Tibet.

Prime Minister Sushil Koirala has told Reuters the death toll could reach 10,000, with information on casualties and damage from far-flung villages and towns yet to come in.

That would surpass the 8,500 who died in a 1934 earthquake, the last disaster on this scale to hit the Himalayan nation of 28 million people located between India and China.

However, there were signs on Wednesday that Kathmandu was slowly returning to normal. Some people prepared to head home to sleep after spending the last four nights in the open out of fear their damaged homes may not be able to withstand aftershocks.

Some street vendors started selling fruit in the city, but others said they were too scared to open shops because buildings had been so badly damaged.

“I want to start selling, I have children at home, but how can I open a shop where it is risky for me to sit inside?” said Arjun Rai, a 54-year-old who runs a general store.

In some mountainous areas, the government has struggled to deliver aid. Rescue helicopters have had problems landing at some sites.

Shambhu Khatri, a technician on board one of the helicopters, said entire hillsides had collapsed in parts of the Gorkha district, burying settlements, and access was almost impossible.

In Kathmandu and other cities, hospitals quickly overflowed with injured soon after the quake, with many being treated out in the open or not at all.

Guna Raj, who works for a Kathmandu-based NGO specializing in providing sanitation, said there have been outbreaks of diarrhea in relief camps because of a shortage of toilets and clean water.

“In the next few days or weeks I am sure there will be an outbreak of epidemics,” said Raj, who is involved in the relief effort.

Foreign Secretary Shanker Das Bairagi appealed for specialist doctors from overseas, as well as for search-and-rescue teams despite earlier suggestions from officials that Nepal did not need more such assistance.

“Our top priority is for relief and rescue teams. We need neurologists, orthopedic surgeons and trauma surgeons,” Bairagi said. Experts from a Polish NGO that has an 87-strong team in Nepal have said the chances of finding people alive in the ruins five days after the quake were “next to zero”.

Nevertheless, a Nepali-French rescue team pulled a 28-year-old man, Rishi Khanal, from a collapsed apartment block in Kathmandu on Tuesday after he had spent around 80 hours trapped in a room with three dead bodies.

Doctors amputated one of his legs on Wednesday because of damage from prolonged internal bleeding.

Tensions between foreigners and Nepalis desperate for relief surfaced, rescuers said, as fresh avalanches were reported in several areas.

Members of Israeli search-and-rescue group Magnus said hundreds of tourists, including about 100 Israelis, were being airlifted out of Langtang in Rasuwa district, a popular trekking area north of Kathmandu hit by a fresh avalanche on Tuesday.

Fights had broken out there because of food shortages, Magnus team member Amit Rubin said. One of the trekkers said there had also been scuffles over places on the rescue helicopters.

The quake also triggered an avalanche on Mount Everest that killed at least 18 climbers and guides, including four foreigners, the worst disaster on the world’s highest peak.