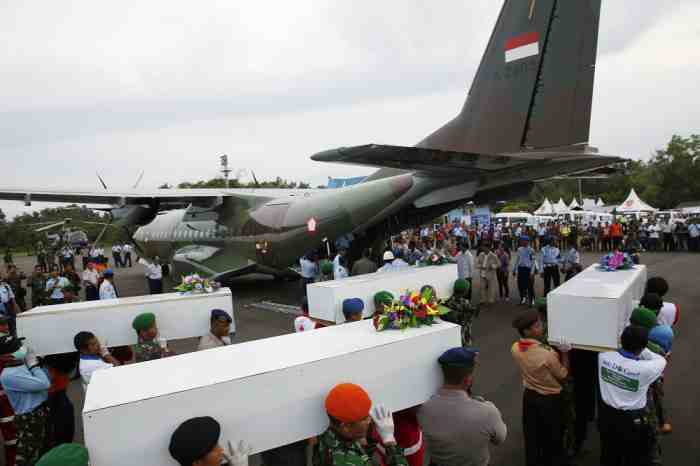 PHUKET: Ships and aircraft criss-crossed the seas off Borneo on Friday hunting for the wreck of an Indonesia AirAsia passenger jet, but bad weather again hindered the search for the plane and the black box flight recorders that should reveal why it crashed.

An official said 30 bodies had been recovered, along with pieces of the broken-up plane, in the Indonesian-led search for Flight QZ8501 that is concentrated on 1,575 square nautical miles of the northern Java Sea.

Strong winds and heavy seas have stopped divers from looking for the fuselage of the Airbus A320-200, which plunged into the water on Sunday while en route from Indonesia’s second-biggest city Surabaya to Singapore with 162 people on board.

“Waves were between 3 and 4 meters today, making it difficult to load bodies onto ships and between ships,” Fransiskus Bambang Soelistyo, head of Indonesia’s search and rescue agency, told reporters in Jakarta, adding that some vessels would search through the night.

“Tonight we are sending tug boats which should make the (body) transfers easier.”

He said two of the 30 bodies found were strapped to their plane seats.

The multinational search operation based in Pangkalan Bun, the town in southern Borneo closest to the search area, was bolstered on Friday by experts from France’s BEA accident investigation agency, which attends all Airbus crashes.

Officials said the French team’s hydrophones – sophisticated underwater acoustic detection devices – and towed sonar equipment brought by other international experts could not be used on Friday because of high waves.

But naval vessels from Indonesia, the United States and Singapore with in-built anti-submarine capabilities were using sonar to sweep the sea floor.

The cause of the crash, the first suffered by the AirAsia group since the budget operator began flying in 2002, is unexplained. Investigators are working on a theory that the plane stalled as it climbed steeply to avoid a storm about 40 minutes into a flight that should have lasted two hours.

Officials earlier said it may take up to a week to find the black boxes, which investigators hope will unravel the sequence of events in the cockpit during the doomed jet’s final minutes.

“After the black box is found, we are able to issue a preliminary report in one month,” said Toos Sanitioso, an investigator with the National Committee for Transportation Safety. “We cannot yet speculate what caused the crash.”

Even in bad weather, the search for the AirAsia plane is less technically challenging than the two-year search for an Air France jet that crashed into deep Atlantic waters in 2009, or the fruitless hunt for Malaysia Airlines Flight MH370 that disappeared last year.

Bodies plucked from the sea are being taken in numbered coffins to Surabaya, where relatives of the victims, most of whom were Indonesian, have gathered. Authorities have been collecting DNA from relatives to help identify the bodies.

The first funeral of one of the crash victims was held on Thursday, and on Friday officials said the remains of three more had been identified, including a flight attendant.

AirAsia boss Tony Fernandes tweeted that he would accompany the body of one victim home from Surabaya.

“I’m arriving in Surabaya to take Nisa home to Palembang,” he wrote. “I cannot describe how I feel. There are no words.”

The plane was travelling at 32,000 ft (9,753 meters) and the pilots had asked to climb to 38,000 ft to avoid bad weather just before contact was lost. When air traffic controllers granted permission to fly at 34,000 ft a few minutes later, they got no response.

A source close to the investigation said radar data appeared to show the aircraft made an “unbelievably” steep climb before it crashed, possibly pushing it beyond the A320’s limits.

Hadi Mustofa Djuraid, a Transport Ministry official, told reporters that authorities were investigating the possibility that the pilot did not ask for a weather report from the meteorological agency at the time of takeoff.

He added that pilots were required to do so before flying.

Indonesia AirAsia’s president director, Sunu Widyatmoko, said in a text message: “We will make a release shortly” on that aspect of the investigation.

The Indonesian captain, a former air force fighter pilot, had 6,100 flying hours on the A320 and the plane last underwent maintenance in mid-November, according to Indonesia AirAsia, 49 percent owned by Malaysia-based AirAsia.

Three airline disasters involving Malaysian-affiliated planes in under a year have spooked travellers.

Malaysia Airlines Flight MH370 disappeared in March en route from Kuala Lumpur to Beijing with 239 passengers and crew and has not been found. On July 17, the same airline’s Flight MH17 was shot down over Ukraine, killing all 298 people on board.