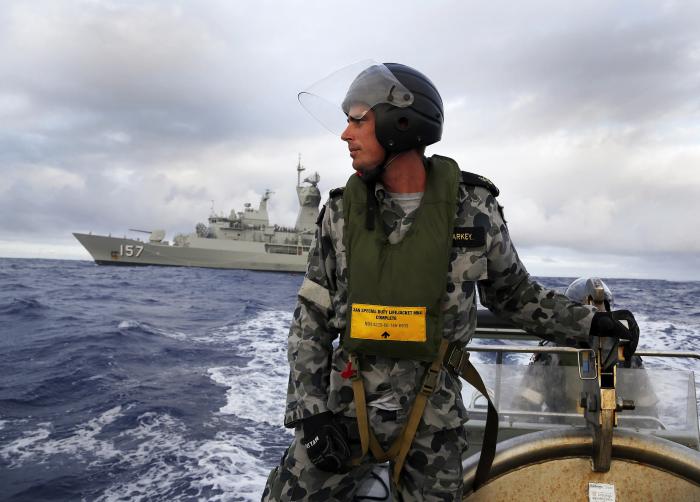 PHUKET: A tropical cyclone was threatening to hamper the search for a missing Malaysian jetliner in a remote stretch of the Indian Ocean on Monday, as a submarine drone neared the end of its mission scouring the sea bed with still no sign of wreckage.

Search authorities and the Australian and Malaysian governments have said a series of sonar signals, or “pings”, traced to the area may have emanated from the plane’s “black box” and present the most credible lead as to its whereabouts.

However no pings have been detected in almost two weeks and authorities now fear that, with the flight data recorder’s battery several weeks past its expected expiry date, the black box may not emit further signals.

A U.S. Navy remote controlled submarine, the Bluefin-21, was on its ninth mission scanning the largely unmapped stretch of sea bed where the pings are believed to have come from, with still no trace found, Australian search officials said on Monday.

“Bluefin-21 has searched approximately two-thirds of the focused underwater search area to date. No contacts of interest have been found to date,” the Joint Agency Coordination Centre said in a statement.

The centre added that the search, which has so far been largely unimpeded by weather, may be affected as Tropical Cyclone Jack continued to move south over the ocean.

“Widespread showers are developing with isolated thunderstorms to the north and east south-easterly winds,” the centre said of the weather forecast in the search area.

On Saturday, the centre said the Bluefin-21 was expected to complete its search of the targeted area within a week. But with the prospect of that search ending without finding any sign of the plane drawing ever more likely, the authorities are under pressure to determine their next strategy.

The search coordinator, retired Air Chief Marshal Angus Houston, said on April 14 that an air and surface search for debris would end within three days.

But the daily sorties have continued unabated since then, in a search involving some two dozen nations and already estimated to be the most expensive in aviation history.

The Malaysian government has said the search is at a “very critical juncture” and asked for prayers for its success. Malaysian Acting Transport Minister Hishammuddin Hussein has also said the government may consider using more remote controlled submarines in the search.