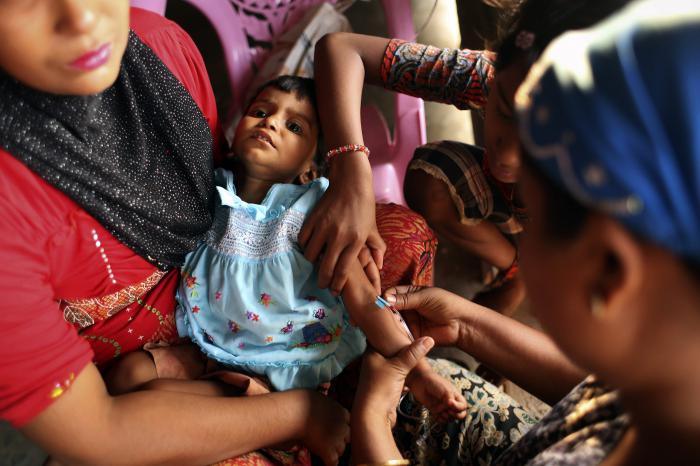 PHUKET: As three-month-old Asoma Khatu approached her final, laboured breaths, her neighbour Elia, a 50-year-old former farmer, dug through the strongbox holding some of the last medicines in this camp for Myanmar’s displaced Rohingya.

First, some paracetamol for the severely malnourished girl’s fever and a wet towel for her forehead. Then some rehydration salts for her diarrhoea. There was nothing else left.

The death of Asoma in a dusty, stifling hot camp a two-hour boat ride from Sittwe, capital of Rakhine State in west Myanmar, is part of a growing health crisis for stateless Muslim Rohingya that has been exacerbated by restrictions on international aid.

“I think my child would have made it if someone was here to help,” Asoma’s mother, Gorima, told Reuters, as she cradled the girl’s shrouded, almost weightless body in her arms.

In February, Myanmar’s government expelled the main aid group providing health to more than half a million Rohingya in Rakhine State – Medecins Sans Frontieres-Holland (MSF-H) – after the group said it had treated people believed to have been victims of violence in southern Maungdaw township, near the Bangladesh border, in January.

The United Nations says at least 40 Rohingya were killed there by Buddhist Rakhine villagers. The government denies any killings occurred.

Attacks on March 26 and 27 on NGO and U.N. offices by a Rakhine mob angered by rumours a foreign staffer for another group, Malteser International, had desecrated a Buddhist flag led to the withdrawal of aid groups providing healthcare and other essential help to another 140,000 Rohingya living in camps after being displaced by Buddhist-Muslim violence since 2012.

The government had pledged to allow most NGOs to return to full operation after the end of Buddhist New Year celebrations this month.

But so far only food distribution by the World Food Programme has returned to normal, and Rakhine community leaders in the state government’s Emergency Coordination Centre have imposed conditions on others wanting to go back.

NGOs will only be allowed to operate if they show “complete transparency” in disclosing their travel plans and projects and are not seen to favour Rohingya, said Than Tun, a Rakhine elder who is part of the centre. Neither MSF-H nor Malteser are being allowed back in, he said.

With foreign aid largely absent, every day of delay is measured in preventable deaths.

No one is there to count them accurately, but the average of 10 daily emergency medical referrals before aid groups left are no longer happening, said Liviu Vedrasco, a coordinator with the World Health Organisation.

Extrapolating from that how many people could be saved is impossible, Vedrasco said. “It was not ideal before March 27. NGOs were not providing five-star medical care. But they were filling a gap.”

Government medical teams have been making limited visits to Rohingya areas, but foreign aid groups say they are inadequate. Most of the slack has fallen to under-qualified Rohingya using whatever is at their disposal.In Kyein Ni Pyin, nearly 4,600 Rohingya live under police guard and their movements are restricted. They are classified by the government as illegal Bengali immigrants. One foreign aid worker described the area to Reuters as “a concentration camp”.

Elia is one of eight people given seven days’ training to assist in an MSF-H clinic, which now sits empty. The only medicines he has are those he used on little Asoma and some iodine. Government doctors have made three visits of about two to three hours each, he said.

Eight people, including six infants, have died since the aid group left, he said. The night before a recent Reuters visit, one woman lost her baby during delivery.

Win Myaing, a spokesman for the Rakhine State government, dismissed the notion that there is a health crisis in the camps.

“There is a group of people in one of these camps that shows the same sick children to anyone who visits. Even when the government arranges for treatment they refuse it,” he said.

The United States, Britain and other countries have called on the government to allow aid groups to return to Rakhine State, to little effect so far.

Appeals by the international community for Myanmar to do more to end persecution of the Rohingya have similarly made little impression on a government that sees them as illegal immigrants and denies them citizenship.

U.S. President Barack Obama, speaking during a visit to Malaysia, said on Sunday that Myanmar would not succeed if its minority Muslim population was oppressed.

He may visit Myanmar towards the end of this year, when it is due to host a regional summit, and he could come under pressure from lobby groups to restore sanctions that have been softened since the end of military rule in 2011.

Opposition leader Aung San Suu Kyi, who led the fight for democracy while the military ran the country and now sits in parliament, has faced rare criticism abroad for her failure to defend the Rohingya.

Visits by Reuters to the remote Kyein Ni Pyin camp, as well as several camps near Sittwe, reveal a widespread struggle with illness. In low-slung huts, dozens of mothers showed their emaciated children. There is no data to compare malnutrition rates to when NGOs were forced to leave.

Along the bustling main street of the Thae Chaung camp outside Sittwe town, thatched bamboo stalls that sell a limited selection of drugs have become makeshift clinics.

Mohammad Elyas, a 30-year-old who sold medicine in Sittwe’s market before he was driven out by marauding mobs in 2012, displays his laminated qualifications near the front, including a degree in geology and a certificate in traditional medicine.

Medicine is sporadically supplied by sympathetic Rakhine Buddhists in Sittwe, but they run the risk of retribution from their own community for doing so.

“I’m just trying to save as many lives as possible. Even though I don’t have the proper qualifications, if I don’t do this work, people will die,” he said.

Deaths on EU roads halve in a decade