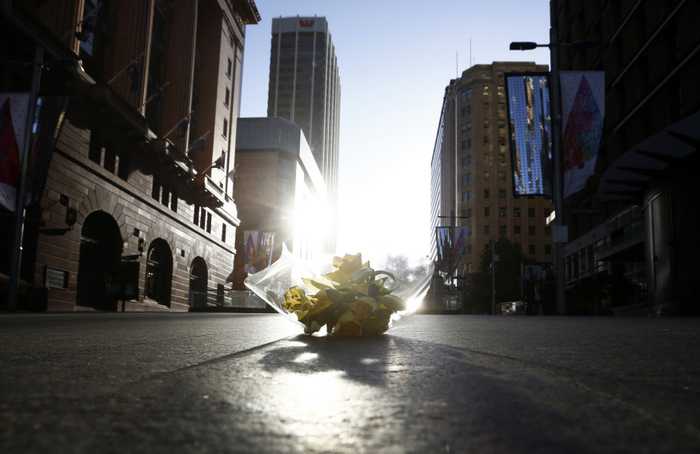 PHUKET: Heavily armed Australian police stormed a Sydney cafe early on Tuesday morning and freed terrified hostages being held there at gunpoint, in a dramatic end to a 16-hour siege in which two captives and the attacker were killed.

Police would investigate whether the two hostages were killed by the gunman or died in the cross-fire, said Andrew Scipione, police commissioner for the state of New South Wales.

Authorities have not publicly identified the gunman but a police source named him as Man Haron Monis, an Iranian refugee and self-styled sheikh known for sending hate mail to the families of Australian troops killed in Afghanistan. He was charged last year with being an accessory to the murder of his ex-wife but had been free on bail.

Several videos apparently showing hostages inside the Lindt cafe in Sydney’s central business district making demands on behalf of Monis were posted on social media during the siege.

The gunman, whom the frightened hostages referred to as “brother”, demanded to talk to Prime Minister Tony Abbott, the delivery of an Islamic State flag, and that media broadcast that Australia was under attack by Islamic State.

Abbott said the gunman was well known to authorities and had a history of extremism and mental instability.

Around 2 am local time (10pm, Phuket time), at least six people believed to have been held captive in the cafe managed to flee after gunshots were heard coming from inside.

Police then moved in, with heavy gunfire and blasts from stun grenades echoing from the building.

“They made the call because they believed at that time if they didn’t enter there would have been many more lives lost,” Scipione told reporters just before dawn.

Police said a 50-year-old man, believed to be the attacker, was killed. Television pictures showed he appeared to have been armed with a sawn-off shotgun.

A man aged 34 and a 38-year-old woman were also killed, police said. The man was the cafe manager and the woman was a mother and lawyer, Sydney media reported. Six were wounded, including a policeman hit in the face with shotgun pellets.

Medics tried to resuscitate at least one person after the raid, a Reuters witness said. Bomb squad members moved in to search for explosives, but none were found.

So far 17 hostages have been accounted for, including at least five who were released or escaped on Monday.

The area around the cafe remained cordoned off with police tape on Tuesday morning.

Office workers stood in long queues outside florist shops, with many bouquets already placed near the police tape. Dozens of bouquets also formed a makeshift shrine at a nearby train station, while flags flew at half mast across the country.

Leaders from around the world had expressed their concern over the siege, including Stephen Harper, the prime minister of Canada, which suffered an attack on its parliament by a suspected jihadist sympathizer in October.

NO LINKS TO TERROR GROUPS

Monis was found guilty in 2012 of sending threatening letters to the families of eight Australian soldiers killed in Afghanistan as a protest against Australia’s involvement there. He was also facing more than 40 sexual assault charges.

“He had a long history of violent crime, infatuation with extremism and mental instability,” Abbott told reporters in Canberra. The prime minister did not identify the gunman.

New South Wales Premier Mike Baird declined to comment when asked by a journalist whether it was appropriate for Monis to be free on bail.

A U.S. security official said the U.S. government was being advised by Australia that there was no sign at this stage that the gunman was connected to known terrorist organisations.

Although the hostage taker was known to the authorities, security experts said preventing attacks by people acting alone could be difficult.

“We are entering a new phase of terrorism that is far more dangerous and more difficult to defeat than al Qaeda ever was,” said Cornell University law professor Jens David Ohlin, speaking in New York.

Australia, a staunch ally of the United States and its escalating action against Islamic State in Syria and Iraq, has been on high alert for attacks by home-grown militants returning from fighting in the Middle East or their supporters.

News footage showed hostages in the cafe holding up a black and white flag displaying the Shahada, a testament to the faith of Muslims. The flag has been popular among Sunni Islamist militant groups such as Islamic State and al Qaeda.

The incident forced the evacuation of nearby buildings and sent shockwaves around a country where many people were turning their attention to the Christmas holiday.

In September, anti-terrorism police said they had thwarted an imminent threat to behead a random member of the public and, days later, a teenager in the city of Melbourne was shot dead after attacking two anti-terrorism officers with a knife.

The siege cafe is in Martin Place, a pedestrian strip popular with workers on their lunch break, which was revealed as a potential location for the thwarted beheading.