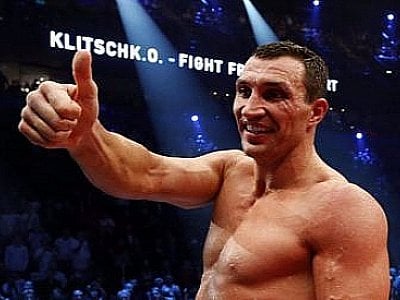 The 36-year-old Ukrainian, who holds the IBF, IBO, WBO and WBA crowns, was never seriously troubled by the 32-year-old who saw his unbeaten record snap after 27 wins in 27 fights.

“It was a very tough fight and Mariusz had to take a lot of punches,” Klitschko said in a ringside interview. “I thought that he would go down but he fought on.”

“On July 7 after our last fight we sang happy birthday to him. We miss you, we love you, you are always here in the ring, thank you Emanuel,” said Klitschko.

With Hollywood actor Sylvester Stallone, who is co-producing a musical with the Klitschko brothers, making a pre-fight appearance in the ring for the 16,000 fans in the O2 arena, Klitschko set the pace from the first round.

Wach may be the first opponent taller than Klitschko, who is 1.98 metres, but he lacked the speed of the Ukrainian.

The Pole did get one chance in the fifth round, pummelling his opponent after a huge right to the head but the Ukrainian was saved by the bell.

It was back to form in the following rounds and Klitschko, who improved his record to 59 wins from 62 fights, pinned Wach to the ropes in the seventh and eighth but failed to knock him down.

Instead, Klitschko dished out painful punishment in the final rounds with the eyes of fans on referee Eddie Cotton to see whether he would put an end to it.

Petraeus-Broadwell Affair: Irony and tragedy before and after the revelation

World News: Syria – Millions in need of aid as winter sets in