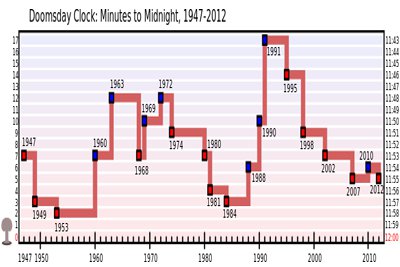 PHUKET: The Bulletin of the Atomic Scientists (BAS) on Tuesday announced it has moved its symbolic ‘Doomsday Clock’ a minute forward, bringing it five minutes to midnight as a result of ‘inadequate progress’ on nuclear weapons reduction and proliferation.

It is the first time since early 2010 that the BAS has decided to move the Doomsday Clock, which aims to represent how close humanity is to destruction, according to the organization. The last time was in January 2010 when the clock’s minute hand was pushed back one minute from five to six minutes before midnight.

“It is five minutes to midnight. Two years ago, it appeared that world leaders might address the truly global threats that we face. In many cases, that trend has not continued or been reversed,” the BAS said in a statement. “For that reason, the Bulletin of the Atomic Scientists is moving the clock hand one minute closer to midnight, back to its time in 2007.”

The organization believes inadequate progress is being made on nuclear weapons reduction and also notes ‘continuing inaction’ with regard to climate change. This is in stark contrast with January 2010, when the BAS noted the planned negotiations for further reductions in the U.S. and Russian nuclear arsenal, and agreements in Copenhagen to limit global temperature rise and limit carbon emissions.

“The provisional developments of two years ago have not been sustained, and it makes sense to move the clock closer to midnight, back to the value it had in 2007,” said Lawrence Krauss, co-chair of the BAS Board of Sponsors.

“Faced with the clear and present dangers of nuclear proliferation and climate change, and the need to find sustainable and safe sources of energy, world leaders are failing to change business as usual,” he said.

Allison Macfarlane, chair of the BAS Science and Security Board, warned the global community may be near a ‘point of no return’ in efforts to prevent catastrophe from changes in Earth’s atmosphere.

The Doomsday Clock was launched in 1947 at seven minutes to midnight. The closest approach to midnight was from 1953 to 1960 as the United States and the Soviet Union carried out tests of thermonuclear devices. “Only a few more swings of the pendulum, and, from Moscow to Chicago, atomic explosions will strike midnight for Western civilization,” the bulletin said in 1953.