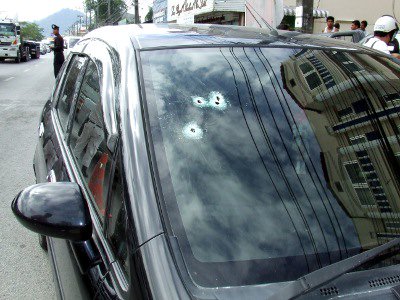 PHUKET: A Phuket newsman was shot dead by a man riding pillion on a motorbike this morning.

Wisut “Ae Inside” Tangwitthayaporn, 40, was driving with his wife to Provincial Hall in Phuket Town when the ambush was sprung.

He had just pulled out of the entrance of Srisuchart Grandview onto Thepkrasattri Road and was intending to make a U-turn on the main road when a motorbike with two riders cut him off and forced him to stop in the middle of the southbound lane.

The unidentified gunman then fired four shots through the windshield of Mr Wisut’s Honda Jazz, striking Mr Wisut in the chest.

Mr Wisut was rushed to Vachira Phuket Hospital, where he was pronounced dead at about 10:30am.

Police have yet to announce any possible motives for the attack.