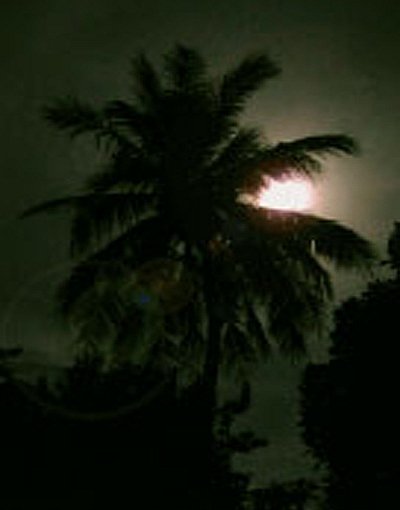 PHUKET: How often do we overlook the obvious? How many times have you gone shopping in Phuket City, or even to Bangkok, for an essential purchase, then discovered that you could have found exactly what you wanted just down the road? Maybe it’s just me.

I’ve even found myself deciding to take holidays outside my adopted home country of Thailand and spending a week or two elsewhere. The result is that I’m always rather glad to be home.

There are the odd frustrations here, but look at what we get in return. Sometimes that’s overlooked. I know I don’t have much to say about anything serious, but I do feel that I, like many others, take a lot of what we enjoy here on Phuket for granted; we overlook things that new visitors gawp at.

Case in point: I was coming home fairly late from an evening of imbibing, and as I was walking up my driveway I happened to look up into the sky before I turned on the light.

It was like a scene from a hackneyed ’30s black-and-white film – the sort of thing they put up at the end of the film with the words “The End” emblazoned across the middle, in case you weren’t sure.

The coconut palm next door looked as it had never before. I had walked past this particular tree daily without giving it a second thought. It was stunning. Even in my somewhat inebriated state, I went into the house and fetched my camera.

Given the limitations of my point-and-press camera, I had no idea how the pictures would come out, but come out they did. The photograph here isn’t exactly the typical result of a lads’ night out. The other, somewhat brighter picture is exactly the same tree the following morning, after I’d sobered up.

Everyone reading this is presumably either a current or past visitor to Phuket, or is resident here now. Everywhere you go on the island, there is one common feature, something so common that sometimes we don’t see it – the palm tree. If you were asked to name something which represents the island, this could well be it.

Somehow, we seem to ignore them though – there are just so many. There are certainly plenty of varieties – from the inevitable coconut palms which gracefully arch over our numerous beaches, to the majestic Royal Palm, which prevails alongside the roads of Phuket.

The coconut palm shouldn’t be thought of as just another beach bum, though. These things will grow wherever you tell them to on this island. If you find a coconut lying around that has a green shoot poking out of it, stick it in the ground with the shoot pointing up, water it and wait a few weeks. A coconut tree will rise up before your eyes. That’s it. Can gardening get any easier than that?

The Royal Palm is also one of the easier palms to grow, either in the ground or in pots. If you do decide on the potted version, make sure that it’s the biggest pot you can possibly find. I once had a palm that I had to re-pot three times, due to the number of pots that were destroyed by the tree bursting them from the inside.

The last pot was so big it had to be ordered from Bangkok, and took three people to put it in place. Several strong lads were required to lift the tree itself from its shattered former home into its new spot. It actually took a crane to transfer it to its final home, as I gave up on the pot idea and went for terra firma. It’s still there to this day.

There are dozens of other palm species that thrive here. A favorite with the older generation is the betel nut palm, the fruit of which has a mildly narcotic effect. If you’ve ever seen an older Thai lady with a huge, red-toothed grin, this could well be the reason. Nowadays, betelnut chewing isn’t as popular as it used to be, but the tree is still often planted because it grows so quickly.

Many owners of larger gardens favor the oil palm, which is grown commercially in huge plantations for the oil that comes from its fruit. This tree is massive, and not exactly the ideal candidate for the average balcony. A more suitable addition to a small terrace or similar spot would be the Golden Cane Palm.

This is the one that is usually seen in pots, two to three meters tall, multi-tufted in appearance with yellow-green leaves. It’s an ideal big tree for a less-than-motivated gardener, as it’s very forgiving and requires little work – just a little water every now and then.

Palms are pretty obvious on Phuket, but we do seem to overlook them. They’re not the most difficult things in the world to cultivate. Let’s just hope that not everyone needs to be in a drunken haze to appreciate them.

Special Report: Caring for the unknown dead of Phuket