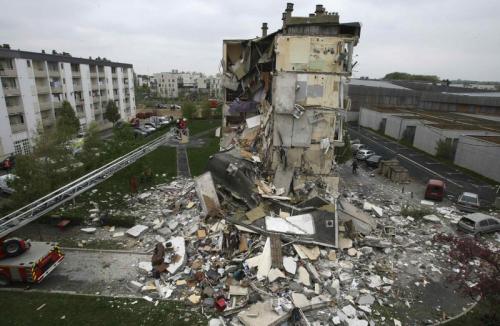 
Fugitive owner arrested as Bangladesh building toll reaches 377
Reuters / Phuket Gazette
PHUKET: The owner of a factory building that collapsed in Bangladesh killing hundreds of garment workers was arrested on Sunday trying to flee to India, as hopes of finding more survivors from the country’s worst industrial accident began to fade.

Bangladesh television showed Rana, a local leader of the ruling Awami League’s youth front, being flown by helicopter to the capital Dhaka, where he will face charges of faulty construction and causing unlawful death.

Authorities put the latest death toll at 377 and expect it to climb higher with hundreds more still unaccounted for.

Four people were pulled out alive on Sunday after almost 100 hours beneath the mound of broken concrete and metal, and rescuers were working frantically to try to save several others still trapped, fire services deputy director Mizanur Rahman said.

“The chances of finding people alive are dimming, so we have to step up our rescue operation to save any valuable life we can,” said Major General Chowdhury Hassan Sohrawardi, coordinator of the operation at the site.

About 2,500 people have been rescued from the wrecked building in the commercial suburb of Savar, about 30 km (20 miles) from the capital, Dhaka.

Officials said the eight-storey complex had been built on spongy ground without the correct permits, and more than 3,000 workers – mainly young women – entered the building on Wednesday morning despite warnings that it was structurally unsafe.

A bank and shops in the same building closed after a jolt was felt and cracks were noticed on some pillars on Tuesday.

Police said one factory owner gave himself up on Sunday following the detention of two plant bosses and two engineers the day before.

Anger over the disaster has sparked days of protests and clashes, with police using tear gas, water cannon and rubber bullets to quell demonstrators who set cars ablaze.

Garment workers blockaded a highway in the nearby industrial zone of Gazipur on Sunday demanding capital punishment for the owners.

The main opposition, joining forces with an alliance of leftist parties which is part of the ruling coalition, called for a national strike on May 2 in protest over the incident.

Built on a filled-in pond

Wednesday’s collapse was the third major industrial incident in five months in Bangladesh, the second-largest exporter of garments in the world behind China. In November, a fire at the Tazreen Fashion factory in a suburb of Dhaka killed 112 people.

Such incidents have raised serious questions about worker safety and low wages, and could taint the reputation of the poor South Asian country, which relies on garments for 80 percent of its exports. The industry employs about 3.6 million people, most of them women, some of whom earn as little as $38 a month.

Emdadul Islam, chief engineer of the state-run Capital Development Authority (CDA), said on Friday that the owner of the building had not received the proper construction consent, obtaining a permit for a five-storey building from the local municipality, which did not have the authority to grant it.

Furthermore, another three storeys had been added illegally, he said. “Savar is not an industrial zone, and for that reason no factory can be housed in Rana Plaza,” Islam told Reuters.

Islam said the building had been erected on the site of a pond filled in with sand and earth, weakening the foundations.

North American and European chains, including British retailer Primark and Canada’s Loblaw, a unit of George Weston Ltd, said they were supplied by factories in the Rana Plaza building.

Since the disaster, the Bangladesh Garment Manufacturers and Exporters Association (BGMEA) has asked factory owners to produce building designs by July in a bid to improve safety.

The collapse may have been caused by a gas explosion, regional official Michel Bernard told BFM-TV.

The death toll was not likely to rise as the injured people were not at risk and there were no residents unaccounted for, an official at the region’s emergency centre told Reuters.

Around 10 of the 40 apartments in the 1960s-era building were affected by the collapse.


Two police officers shot as Italian government sworn in
Reuters / Phuket Gazette
PHUKET: Two police officers were shot and wounded outside the Italian prime minister’s office on Sunday as Enrico Letta’s new government was being sworn in about a kilometer away at the president’s palace, RAI state television reported.

One man was arrested at the scene of the shooting, a witness said, and it was initially unclear whether the attack was linked to the launch of the new government.

One of the officers was shot in the neck and was in a serious condition, a police official said.

Letta, 46, the moderate deputy head of the Democratic Party (PD), on Saturday ended two months of political stalemate since February’s inconclusive election when he brought together former political rivals in a broad coalition government.

Letta’s ministers stepped forward one by one to swear allegiance to the republic before President Giorgio Napolitano, who personally picked Letta as prime minister and had a central role in the choice of his cabinet team.

Support for the Alternative fuer Deutschland (AfD), which wants Germany to quit the euro and reintroduce the deutsche mark, is at 2 percent, according to a survey by Emnid pollsters also released on Sunday.

“For Germany, it would be economically insane to exit the euro,” Schaeuble told German weekly Focus, adding that Switzerland’s struggle with its soaring franc proved how problematic it could be to have a stronger currency.

Political analysts say it would be difficult for the AfD, launched a few months ago by a group of renegade academics, journalists and businessmen, to get above the five percent threshold needed to enter parliament in September.

But Schaeuble said that the elections in Lower Saxony in January, in which the centre-left opposition edged Chancellor Angela Me