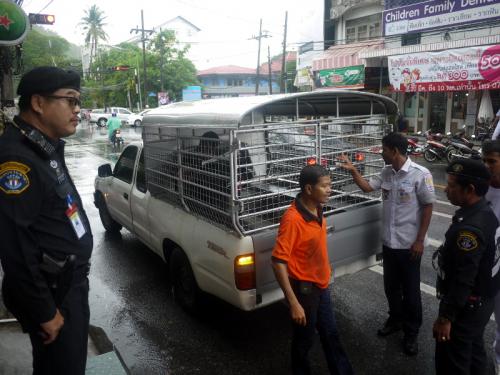 PHUKET: The two men* who were arrested for the armed robbery of the well-known Davinci catamaran last night attempted to escape from a police vehicle while being transported to court today, the Chalong Police confirmed to the Phuket Gazette.

“The suspects broke the cage door at the rear of the vehicle while it was stopped at a traffic light on Montri Road,” Chalong Deputy Superintendent Jamroon Plaiduang said.

“However, police were able to catch them,” he added.

The attempted escape today came after Phuket natives Niwat Duangmanee, 21, and Theeraphol Malasan, also 21, were arrested in Chalong Bay last night as they attempted to chase down the only witnesses to the robbery of the Davinci.

The robbery was foiled by Capt Bruce Issell, who was warned by a silent alarm at about 11:30pm that intruders had boarded the yacht (story here).

“Mr Niwat and Mr Theeraphol were charged with armed robbery and using a vehicle [a dinghy] to evade police. They were also charged with receiving stolen property,” Sub Lt Kraisorn Boonprasop said.

Phuket boob job holiday? This round’s on me