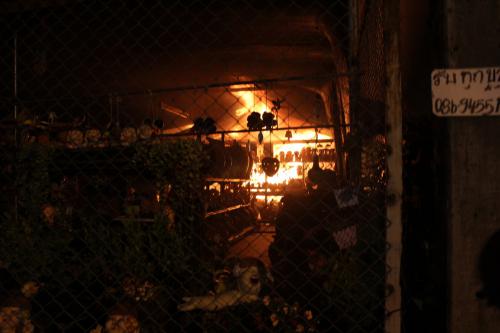 No one was injured in the blaze, which caused an estimated 50,000 baht in damage.

Two fire teams were called to the scene on Bangkok Road (map here), at 11:10pm.

“Firefighters took 30 minutes to put out the fire. Luckily nobody was in the shop and we prevented the fire from spreading to houses next door,” said Phuket City Police Deputy Superintendent Chao Phomna.

An initial inspection of the burnt shop indicated that the fire started at the rear of the store, where several electrical items were located.

Shop owner Manatsanan Tantithamsophol, 42, rushed from her home across town after being notified by a shop neighbor, who had already called the fire brigade.

“We arrived and saw the shop on fire. All I could do was cry,” she told the Phuket Gazette.

“At the back of the store we have a refrigerator, television, radio and other electrical items that were all damaged.”

Though firemen believe an electrical short likely started the fire, experts will investigate to confirm the cause, Lt Col Chao said.

The fire last night came barely two weeks after a family of three were rescued by firefighters after a short circuit started a blaze in their shophouse home in Phuket Town, trapping the family in the bedroom (story here).