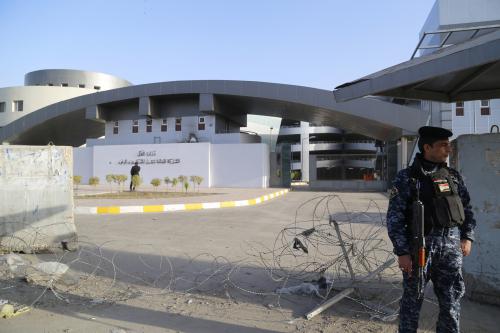 The brazen attack on the building belonging to the Ministry of Transportation in northeast Baghdad coincided with a month-long standoff between the Iraqi army and anti-government fighters in the western province of Anbar.

No group claimed responsibility but suicide bombings in Iraq are the trademark of al-Qaeda linked groups. State buildings are a target for the Islamic State of Iraq and the Levant (ISIL) and its allies that have been regaining momentum in a campaign to destabilise the Shi’ite Muslim-led government.

A senior security source said the six militants took a number of hostages, most of them members of the Facilities Protection Service, and killed nine of them inside the building, which was used to receive visiting delegations.

Four bombers detonated their explosives vests during the assault, a fifth was shot dead by security forces and the last died shortly after being shot, according to security officials.

“The level of security measures in the building was less than normal because it is a service building and not a sensitive site,” another senior security official told Reuters on condition of anonymity.

A further 50 people were wounded in the attack. An Interior Ministry statement gave out a lower death toll – eight, including the six suicide bombers.

Security officials blamed ISIL for the attack and said they expected more in Baghdad in the coming days to distract the security forces and reduce pressure on their militants in the Anbar cities of Falluja and eastern Ramadi.

The Sunni Muslim ISIL, backed by tribal fighters who resent the government, seized control of the two cities in the Sunni-dominated province of Anbar, bordering Syria, on January 1. Iraqi government forces have since surrounded Falluja.

It is the first time Sunni militants have exercised such open control in Iraqi cities since the height of the insurgency that followed the 2003 U.S.-led invasion that overthrew Dictator Saddam Hussein.

Shi’ite Prime Minister Nuri al-Maliki has asked for international support and arms to help combat al Qaeda, which has been invigorated by the civil war in neighbouring Syria, where it is also active.

The U.N. refugee agency said the standoff in Fallujah has driven more than 140,000 people from their homes, describing it as the largest displacement in Iraq since the sectarian slaughter that climaxed in 2006-07.