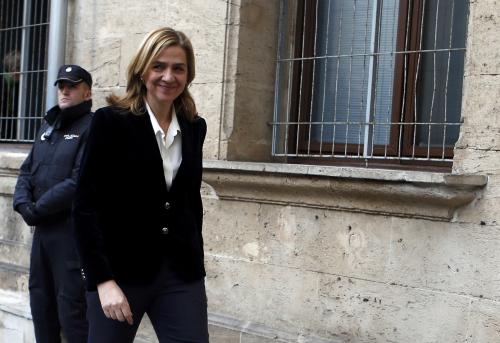 
Spanish princess questioned in corruption investigation
Reuters / Phuket Gazette
PHUKET: Spain’s Princess Cristina was questioned by a judge on Saturday in a corruption case that has deepened public anger over graft among the ruling class and discontent with the royal family.

It was the first time that a Spanish royal has been summoned in a criminal proceeding since the monarchy was restored in 1975 after the death of dictator Francisco Franco.

With Spain emerging slowly from a deep economic and financial crisis which has left 26 percent unemployed, judges are looking into hundreds of corruption cases left over from a property boom that ended abruptly in 2008.

Cristina, the younger daughter of King Juan Carlos and seventh in line to the throne, is facing preliminary charges of tax fraud and money laundering linked to her use of income from a shell company she co-owned with her husband Inaki Urdangarin.

Both the princess and Urdangarin – who have not represented the Crown at official events since 2011 – have denied any wrong-doing.

Reporters were not allowed into the closed hearing in the courthouse in Palma de Mallorca, capital of the Balearic Islands.

Manuel Delgado, a lawyer for one of the two civil groups bringing charges against the princess told media outside: “Most of her answers have been ‘I don’t know’, ‘I don’t remember’ and ‘I fully trusted my husband’.”

Jesus Silva, one of the princess’s lawyers, told journalists she had been “happy” with how the testimony had gone. “She answered absolutely all of the questions she was asked, (…) so she has not been evasive,” he added.

Streets away, hundreds of protesters shouted slogans calling for a republic, equal justice for all and an end to institutional corruption.

“I’m a monarchist, but if they have done wrong they should return what they stole and be exposed just like the rest of us,” said Angel Rodriguez, an 80-year-old pensioner passing by the court.

The princess, dressed soberly in a white shirt, black jacket and trousers, had been given special permission to be driven to the courthouse door for security reasons.

That meant she did not have to walk down a long ramp under the glare of hundreds of cameras, unlike her husband when he testified in the case in 2012.

The security arrangements underlined the perception among many Spaniards that the royal family has been given favourable judicial treatment.

Urdangarin is charged with crimes including the embezzlement of 6 million euros ($8.17 million) of public money at a charitable foundation he ran where the princess was a board member.

The former Olympic handball player, is accused of using his royal connections to win generous no-bid contracts from the regional Balearic Islands government to put on sports and marketing events before a 2008 property market crash, when local governments were awash with cash.

Judge Jose Castro is investigating accusations that Urdangarin overcharged and charged for services never provided, and that the proceeds went to a shell company without the appropriate tax being paid.

The couple co-owned the shell company and used it for personal expenses including work on their Barcelona mansion, according to court documents.

Widespread hardship and high unemployment have fuelled popular resentment of the wealthy and powerful, and data show that Spain’s crisis has widened a gulf between rich and poor.

The scandal has hastened a decline in the popularity of the once-revered King Juan Carlos, who has already been embarrassed by a series of gaffes – including his decision to go on lavish elephant hunting trip at a time of particularly harsh cuts.

An opinion poll released last month put the king’s popularity at a record low, with almost two thirds of Spaniards wanting him to abdicate and hand the crown to his son.

“Support for the king plummeted when, in a situation of great economic and social difficulty, he projected an image of frivolity, of having neglected his obligations,” said Ignacio Torres Muro, professor of constitutional law at Madrid’s Complutense University.

After Saturday’s hearing, Castro could formalise the charges and move to trial, or he could drop them or allow the princess to plead to lesser charges.

Castro brought the preliminary charges, based on the accusations from the civil groups, against the princess in January in a 227-page ruling. Last year he brought charges of aiding and abetting, only to have them thrown out by a higher court. The investigation began four years ago.

The princess has stuck by her husband, but last year moved with their four children to Switzerland to escape media attention. She works for a charitable foundation there.
Thai official says Karen refugees receiving humanitarian aid