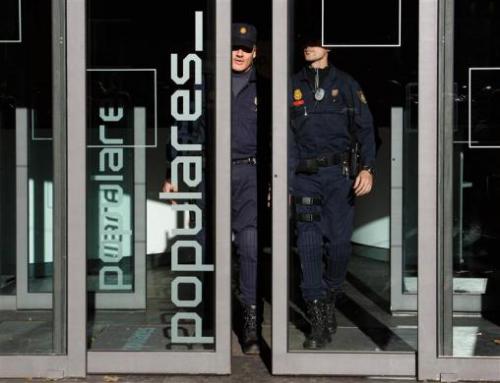 
Spanish police raid ruling party HQ in graft probe
Reuters / Phuket Gazette
PHUKET: Spanish police searched the headquarters of the ruling People’s Party (PP) for 14 hours on Thursday and Friday as part of a corruption investigation that earlier this year threatened to destabilize the government of Prime Minister Mariano Rajoy.

Police entered late on Thursday on the order of examining Magistrate Pablo Ruz, searching for documents and invoices that might provide evidence of off-the-book payments linked to renovation work on the building carried out from 2005 to 2011, a PP spokesman said.

The outcome of the raid on the central Madrid building was not known, a judicial source said. The search ended on Friday morning.

Speaking at a press conference in Brussels, Rajoy said he had given instructions to the party to collaborate fully with the investigation.

“I have absolute respect for any decision made by the courts. We’re waiting for their decision, though we’re not worried,” Rajoy said.

Ruz is looking into a slush fund that former PP treasurer Luis Barcenas says he ran to channel millions of euros of cash donations from construction magnates into the pockets of party leaders.

Rajoy and other PP leaders have denied wrongdoing and have not become direct targets of Ruz’s investigation.

Rajoy’s popularity rating, already hit by an economic crisis which has left one in four working Spaniards without a job, fell sharply when the scandal broke, though with the focus of the investigation still firmly on Barcenas, it has since recovered.

According to court documents, Barcenas hid up to 48 million euros ($65.6 million) in Swiss bank accounts. The former Treasurer is in jail pending trial on charges including money laundering and tax fraud in a separate corruption case.

He has also been charged in the slush fund case.

Roughly 150 tonnes of industrial chemicals will be transported from Syria by ship to a port in Britain, the Foreign Office said in a statement.

The regime of Bashar al-Assad declared 1,300 tonnes of chemical weapons to the Organisation for the Prohibition of Chemical Weapons, which won the Nobel peace prize this year.

Under a tight deadline agreed with the United States and Russia, Damascus has until December 31 to relinquish the most toxic chemicals. Its entire chemical weapons program must be dismantled by mid-2014.

The deal may have averted U.S. missile strikes threatened after hundreds of people were killed in the outskirts of Damsacus on August 21, the worst poison gas attack in a quarter century.

No company was named by the Foreign Office, but Veolia Environment VE, a French-based firm with chemical incineration plants in Britain, has been approached by the British government, sources said.


Putin critic Khodorkovsky in Germany after pardon
Reuters / Phuket Gazette
PHUKET: Mikhail Khodorkovsky, the Russian oil tycoon jailed for a decade after criticising Vladimir Putin, was freed by a presidential pardon on Friday and immediately flew to Berlin where he hoped to be reunited with his family.

Once Russia’s richest man, the 50-year-old looked pale and thin but happy in a photograph of him being greeted by German well-wishers on the tarmac after landing on a private jet.

President Putin, who surprised Russians and pleased the business community by announcing Khodorkovsky’s pardon on Thursday, said he was acting out of “principles of humanity”.

A Russian government source said freeing his best-known and potentially most powerful critic could deflect international complaints about Putin’s human rights record as Russia prepares to host the Winter Olympics at Sochi in seven weeks time.

The move, which Putin said on Thursday was prompted by the illness of Khodorkovsky’s mother, also appeared to show that Putin is feeling confident in his control of the country after facing down street protests when he was re-elected last year.

Within hours of being released from Penal Colony No. 7 at Segezha, deep in the sub-Arctic forest near the Finnish border, Khodorkovsky was in the German capital and issued a statement confirming that he had sought a pardon from his nemesis for family reasons and had not admitted guilt on the fraud charges.

“I appealed to the Russian president on November 12 with a request for a pardon in connection with family circumstances,” he said. “The issue of an admission of guilt was not raised.

“I am very eager for the moment when I can hug my loved ones,” he said. “I will welcome the opportunity to celebrate this upcoming holiday season with my family.”

His mother Marina, 79, told Reuters by telephone from Moscow: “I want to just hug him. I don’t even know yet what I am going to say to him.” Her son said last month that she was facing a second bout of cancer and he might not see her again.

“My father is free and safely in Germany,” his son, Pavel Khodorkovsky, said on Twitter. “Thank you all for the support you’ve given my family over these years!”

The former oil baron had been due to be released next August but supporters feared the sentence could be extended, as it was before. He spent the last few years working at the jail, in an area once part of Stalin’s Gulag labour camp system.

In flying to Germany and possibly into exile on a hastily issued passport, Khodorkovsky, named a “prisoner of conscience” by Amnesty International, was following a route taken by Soviet-era dissidents like “Gulag Archipelago” author Alexander Solzhenitsyn, who was expelled to West Germany 40 years ago.

Khodorkovsky was greeted at the airport by Hans-Dietrich Genscher, the former German foreign minister who played a major role in East-West relations at the end of the Cold War and who had helped organise the plane to bring Khodorkovsky to Berlin.

The oil baron fell out with Putin before his arrest in 2003 as the president clipped the wings of wealthy “oligarchs” who had become powerful during the chaotic years of Boris Yeltsin’s rule following the collapse of Soviet communism.

His company, Yukos, was broken up and sold off, mainly into state hands, following his arrest at gunpoint on an airport runway in Siberia on fraud and tax evasion charges.

In the eyes of critics at home and abroad, his jailing was a significant stain on the record of Putin, 60, who succeeded Yeltsin in 2000 and has not ruled out seeking another six-year term in 2018.

Khodorkovsky came to represent what critics say is the Kremlin’s misuse of the judicial system, curbing the rule of law, and of its refusal to permit dissent. Putin, who mounted savage personal attacks on Khodorkovsky, has always insisted he got his just deserts in the courts for theft on a grand scale.

Putin would not have allowed Khodorkovsky’s release if he saw him as a threat, political strategist Gleb Pavlovsky told Ekho Moskvy radio. “Khodork