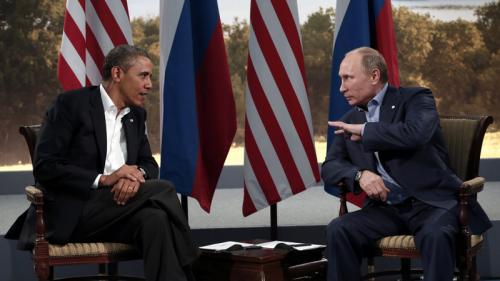 
European, U.S. leaders launch free-trade talks
Reuters / Phuket Gazette
PHUKET: The United States and the European Union launched negotiations for the world’s most ambitious free-trade deal on Monday, promising thousands of new jobs and accelerated growth on both sides of the Atlantic.

Trade between Europe and the United States is worth almost $3 billion (1.9 billion pounds) a day and a pact could boost both the EU and U.S. economies by more than $100 billion a year each – an attractive prospect after the devastating impact of Europe’s debt crisis.

“This is a once in a generation prize and we are determined to seize it,” said British Prime Minister David Cameron, flanked by U.S. President Barack Obama and the presidents of the European Commission and the European Council.

The first round of negotiations will take place in Washington in July, Obama said, speaking at the Group of Eight summit near the Northern Irish town of Enniskillen.

First considered three decades ago but knocked down by France in the 1990s, the idea of an EU-U.S. free-trade deal has gathered momentum as Brussels and Washington look to generate growth and China’s rise prompts deeper Western integration.

The United States and the European Commission, the executive body of the 27-country European Union, hope for a free-trade deal by the end of 2014 – a tight deadline in complex international trade talks that usually take many years.

The European Union and the United States already account for about half the world’s economic output and nearly a third of world trade, and bringing down the final barriers to trade could unleash billions of dollars in transatlantic business.

But France threatened to block the start of talks until the other 26 EU governments accepted on Friday its demand to shield movies and online entertainment from the might of Hollywood and Silicon Valley.

That kept Paris on board, but EU and U.S. officials have said that excluding any sector from the talks threatens the scope of comprehensive deal and could limit the economic gains.

Obama hinted at that in his remarks. “It is important that we get it right and that means resisting the temptation to downsize our ambitions or avoid tough issues just for the sake of getting a deal,” he said.

The London-based Centre for Economic Policy Research estimates a pact – to be known as the Transatlantic Trade and Investment Partnership – could boost the EU economy by 119 billion euros (101.2 billion pounds) a year, and the U.S. economy by 95 billion euros.

However, a report commissioned by Germany’s non-profit Bertelsmann Foundation and published on Monday, said the United States may benefit more than Europe. A deal could increase GDP per capita in the United States by 13 percent over the long term but by only 5 percent on average for the European Union, the study found.

Following the collapse of global trade talks in 2008, both the United States and Europe have sought to strike as many free-trade agreements as possible, and Brussels alone is negotiating with more than 80 countries.


Putin, Obama face off over Syria at tense G8 summit
Reuters / Phuket Gazette
PHUKET: Russian President Vladimir Putin faced further isolation on the second day of a G8 summit on Tuesday as world leaders lined up to pressure him into toning down his support for Syrian President Bashar al-Assad.

Following an icy encounter between the Kremlin chief and U.S. President Barack Obama late on Monday, the G8 leaders will seek to find resolution to a war that has prompted powers across the Middle East to square off on sectarian lines.

The sticking point again will be Putin, who faced a barrage of criticism from Western leaders for supporting Assad and the Syrian’s president’s attempt to crush a 2-year-old uprising in which at least 93,000 people have been killed.

“It’s a clarifying moment to see what kind of commitments the Russians are willing to make in a leading world forum,” a British official said before the leaders met for dinner at a remote, heavily guarded golf course outside of Enniskillen.

An official close to one of the delegations said the talks over dinner had gone better than expected and that a joint communiqué with Russia on Syria now seemed more likely. However, the official declined to speculate on what Russia might be willing to sign up for.

But if consensus could not be reached, it was possible a final statement at the end of the two-day summit might be released without Russia’s input and in the name of the G7 rather than the G8.

Divisions over Syria dominated the atmosphere as global leaders met in Northern Ireland, a place once rocked by decades of violence but which Britain now wants to showcase as a model of conflict resolution.

Putin and Obama appeared tense as they addressed reporters late on Monday after about two hours of talks, with Putin mostly staring at the floor as he spoke about Syria and Obama only glancing occasionally at the Russian leader.

Stung by recent victories for Assad’s forces and their support from Hezbollah guerrillas, the United States said last week it would step up military aid to the rebels, including automatic weapons, light mortars and rocket-propelled grenades.

Putin said Moscow and Washington had different views on Syria but agreed the bloodshed must stop and that the warring parties should be brought to the negotiating table.

“With respect to Syria, we do have differing perspectives on the problem but we share an interest in reducing the violence and securing chemical weapons and ensuring that they’re neither used nor are they subject to proliferation,” Obama said.

British Prime Minister David Cameron, who is chairing the summit, will on Tuesday seek to move the conversation on to taxation and how the Group of Eight leading nations can help close international loopholes in what has become a central theme for the British prime minister.

Cameron has been stung by revelations that the likes of Google and Starbucks have sharply cut their corporate tax bills in Britain using legal loopholes.

Last week he sought to turn up the pressure on other rich economies by pressing Britain’s overseas tax havens into a transparency deal and announcing new disclosure rules for British firms.

Also on the agenda will be a drive by the British to secure a commitment from all the G8 leaders that they will no longer pay a ransom to kidnappers as part of an early meeting between the leaders about counterterrorism.
.


Protests build in Brazil as discontent spreads
Reuters / Phuket Gazette
PHUKET: Tens of thousands of demonstrators marched through the streets of Brazil’s biggest cities on Monday in a growing protest that is tapping into widespread anger at poor public services, police violence and government corruption.

The marches, organized mostly through snowballing social media campaigns, blocked streets and halted traffic in more than a half-