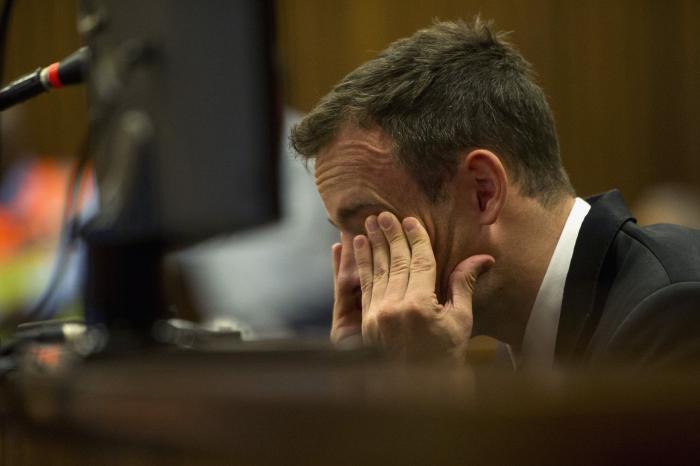 PHUKET: South African track star Oscar Pistorius wept and retched into a bucket in court on Monday during graphic forensic testimony about the death of his girlfriend, Reeva Steenkamp, whom he is accused of murdering on Valentine’s Day last year.

As the first defence witness, forensic pathologist Jannie Botha, described the multiple bullet wounds sustained by Steenkamp, the 27-year-old Paralympic and Olympic sprinter sat in the dock with his head buried in his hands.

Convulsed by sobbing he threw up occasionally into a plastic bucket, as happened during previous sessions last month when the court heard details of Steenkamp’s autopsy and reviewed pictures of the blood-stained toilet and bathroom.

Pistorius, nicknamed the “Blade Runner” due to the carbon-fibre prosthetic limbs he uses in competition, is accused of killing Steenkamp deliberately by firing four rounds from a 9 mm pistol through a locked toilet door after an argument.

He is expected to take the stand later on Monday in his own defence. He has pleaded not guilty, saying he mistook 29-year-old model and law graduate Steenkamp for an intruder hiding in the toilet at his luxury Pretoria home.

If found guilty of murder, Pistorius faces at least 25 years in prison.

During his testimony, Botha reviewed Steenkamp’s wounds and the sequence in which the bullets hit her – a crucial detail since several witnesses have testified to hearing a woman’s screams during a volley of shots in the early hours of February 14.

Botha agreed with state pathologist Gert Saayman that the first round hit her in the hip, causing her to collapse, while the final shot hit her in the head, killing her almost instantly.

The trial, now into its 17th day, has gripped South Africa and millions of athletics fans around the world who saw Pistorius as a symbol of triumph over physical adversity.

The sprinter’s lower legs were amputated as a baby but he went on to achieve global fame as the “fastest man on no legs,” winning gold medals at the Beijing and London Paralympics, and reaching the semi-finals of the 400 metres in the London Olympics against able-bodied athletes.