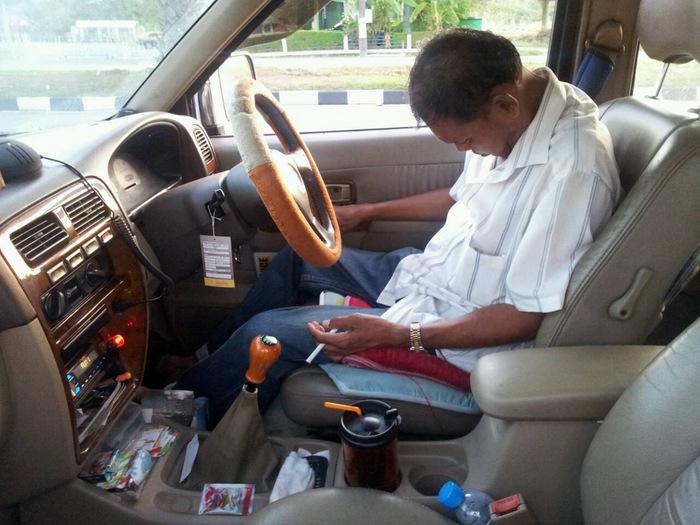 PHUKET: The Phuket Airport taxi driver who was found asleep behind the wheel and smelling of alcohol early yesterday morning will be called in for questioning by the Phuket Land Transportation Office (PLTO).

The news follows Thalang Police being called to Baan Lipon, between Thalang Town and the Heroines Monument, at 5:30am to find a registered taxi pulled over in the left hand lane and the driver fast asleep.

A Kusoldharm Foundation rescue worker at the scene told the Phuket Gazette that the taxi driver, about 50 years old, fell asleep still clutching an unlit cigarette in his hand.

“It took us about half an hour to wake him up. And when he did finally wake, he just drove off,” he said.

“Fortunately, there were no passengers in the vehicle and the driver did not cause an accident,” said PLTO officer Jaturong Kaewkasi.

“We will coordinate with the Thalang Police and call in the driver. Any taxi drivers found guilty of drunk driving, especially with passengers in the vehicle, will lose their driving license.”

The Gazette has yet to establish whether any police officers who were at the scene will be pursuing charges against the driver as they can no longer establish his blood-alcohol concentration at the time he was in control of the vehicle.