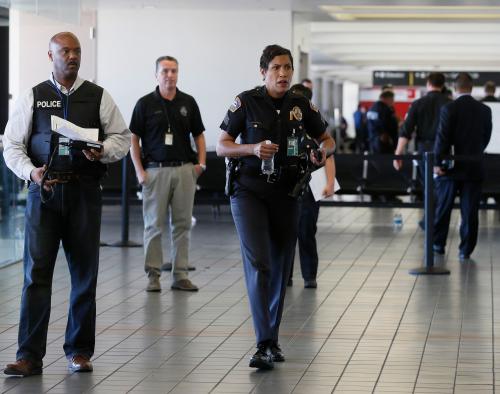 
TSA agent killed, 6 hurt in Los Angeles airport shooting
Reuters/Phuket Gazette
PHUKET: A gunman opened fire with an assault rifle in a terminal of Los Angeles International airport on Friday, killing a Transportation Security Agent and wounding at least six other people before he was shot and captured, authorities said.

The incident prompted scenes of chaos at the airport, which halted flights and evacuated the terminal. Streets surrounding the airport were also shut down.

“An individual came into Terminal 3 of this airport, pulled an assault rifle out of a bag and began to open fire in the terminal,” Patrick Gannon, chief of the Los Angeles Airport Police said at a press conference.

The U.S. Transportation Security Administration said that multiple agents had been shot, one fatally. The agency did not identify the slain agent.

A spokesman for the Los Angeles County Coroner said it was handling one person who was killed in the shooting, a man approximately 40 years old who was not identified by name. It was not immediately clear if that person was the TSA agent.

A Los Angeles fire department spokesman said seven people were hurt and that six of them were taken to area hospitals.

Los Angeles police spokeswoman Officer Norma Eisenman said a suspect had been taken into custody and was believed to be the only person involved in the shooting.

Three male victims hurt in the incident were taken to Ronald Reagan UCLA Medical Centre, where one was listed in critical condition and two others in fair condition, said Mark Wheeler, a spokesman for the hospital.

The condition of the other victims or the gunman was not immediately clear.

Passenger Robert Perez told a local CBS affiliate that airport security agents had come through the terminal shouting that a man had a gun.

“I heard popping and everybody dropped to the ground,” Perez said.

Alex Neumann told cable network CNN that he was in an area inside the airport past a security checkpoint when he heard loud noises and screaming and saw people running in a scene that amounted to mayhem.

“We were at the food court and all of a sudden I hear a big commotion and people started running. People were running and people getting knocked down,” Neumann said, adding that he heard screams. “Mayhem is the best way of describing it.”

Television images showed at least one person being loaded into one of several ambulances at the scene, and passengers were seen being evacuated from the area.

Footage showed emergency responders setting up what appeared to be a triage area outside an airport terminal.

“The general public is being held back… Other than arriving flights, flight operations have been temporary held,” airport spokeswoman Katherine Alvarado said in an emailed statement.

President Barack Obama was briefed on the incident and White House officials are in touch with law enforcement officials on the ground, White House spokesman Jay Carney told reporters.

Hakimullah Mehsud has been reported dead several times before. But late on Friday, several intelligence, army and militant sources across the country confirmed he had been killed in the strike in the lawless North Waziristan region.

“We can confirm Hakimullah Mehsud was killed in the drone strike,” said one senior security official.


Two life sentences for rape, murder that shocked S. Africa
Reuters/Phuket Gazette
PHUKET: A South African court sentenced a man to two life terms on Friday for the rape, mutilation and murder of a teenager in a case that shocked a nation with one of the world’s highest levels of violent crime.

Johannes Kana confessed to raping 17-year-old Anene Booysen before she was dumped at a building site in Bredasdorp, 130 km east of Cape Town, in February. She had been beaten and her stomach was slit open down to her genitals.

The attack came shortly after the gang rape and murder of a 23-year-old student on a New Delhi bus at the end of 2012 that caused outcry and mass protests in India at endemic violence against women.

Booysen’s murder sparked some of the biggest anti-rape campaigns in years in South Africa, with President Jacob Zuma expressing “shock and outrage” and calling for the harshest possible sentences for her attackers.

Three suspects were initially arrested but only 21-year-old Kana stood trial. He confessed to raping Booysen but denied disembowelling her.

The sentencing was met by muted clapping from Booysen’s relatives and sobs from Kana supporters in the public gallery.

There are about 180 reported rapes a day in South Africa, a nation of 53 million people, although the real total is believed to be far higher. Few suspects are ever arrested and only 12 percent of cases brought to court end in conviction.

The draft resolution, which both Germany and Brazil made public, does not name any specific countries, though U.N. diplomats said it was clearly aimed at the United States, which has been embarrassed by revelations of a massive international surveillance program from a former U.S. intelligence contractor.

It would also call on U.N. member states “to take measures to put an end to violations of these rights and to create the conditions to prevent such violations, including by ensuring that relevant national legislation complies with their obligations under international human rights law.”

Several diplomats said they would be surprised if the resolution did not receive the support of an overwhelming majority of U.N. member states.

Brazilian President Dilma Rousseff and German Chancellor Angela Merkel have both condemned the widespread snooping by the U.S. National Security Agency. Charges that the NSA accessed tens of thousands of French phone records and monitored Merkel’s mobile phone have caused outrage in Europe.