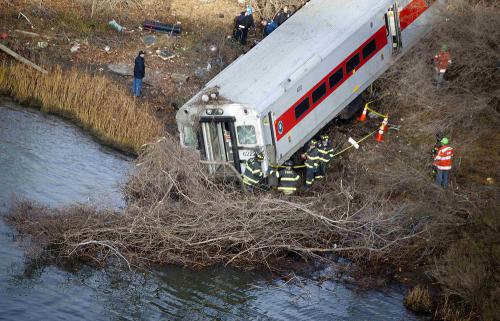 The seven-car Metro-North train’s brakes were working properly but were applied just seconds before it derailed, investigators said. They said black-box recorders recovered from the train showed it had been traveling at 82 miles per hour (132 kph) before entering the 30-mile-per-hour (48-kph) curve.

He said that the NTSB was investigating driver error as a possible cause of the crash, but had not yet ruled out other possibilities. NTSB officials did not indicate how long their review would take.

It was the latest in a string of problems to affect the railroad, including a May derailment in Connecticut that injured more than 70 people.

The NTSB’s Weener said the train was speeding even before it entered the curve as the posted speed limit on the straightaway is 70 miles per hour (112 kph). A freight train derailed in the same place in July.

U.S. Senator Charles Schumer of New York said he had been stunned to learn how fast the Metro-North commuter train was going before the derailment.

“When I heard about the speed, I gulped,” Schumer said at a press conference in Yonkers, New York, not far from the crash site. “It sort of takes your breath away, for a train to be going 82 miles per hour around that curve is just frightening. And the fact that it was going 82 miles per hour, even in the 70 mile per hour zone before the curve started raises so many questions.”

The crash happened about 100 yards (meters) north of Metro North’s Spuyten Duyvil station in the Bronx, an area where the Hudson and Harlem rivers meet. One car was toppled near the water.

“We do know that two minutes before the curve the train was going at 60 miles per hour (97 kph) and had accelerated then up to 82 miles per hour prior to entering the curve,” Weener said in an interview with CNN.

The train’s throttle was reduced to idle six seconds before derailing and its brakes were activated five seconds before the accident, Weener said at the press conference.

“At this point we are not aware of any problems or anomalies with the brakes,” Weener told reporters. Asked if the crash was the result of operator error, he replied, “At this point in time, we can’t tell.”

Anthony Bottalico, the general chairman of the driver’s labor union, the Association of Commuter Rail Employees, identified the driver as William Rockefeller of Germantown, New York. Bottalico said Rockefeller has “never been disciplined on his job on the railroad.”

Rockefeller, who is in the hospital, was scheduled to meet with NTSB officials on Wednesday, Bottalico said.

“He’s very traumatized,” Bottalico said. “He’s devastated by the loss of life, by the injuries to the passengers and his fellow crew members, and he’s extremely upset about all of it.”

The driver was tested for drugs and alcohol after the crash, although the results of those tests have not yet been provided to the NTSB, Weener said. As part of standard investigative procedure, officials seized his cell phone.

Schumer said the engineer “has a good reputation.”

Work crews on Monday used cranes and heavy equipment to lift the derailed cars back onto the tracks, a first step toward clearing the scene and returning the tracks to service. Some sections of track were twisted and broken.

New York City’s deadliest subway train accident was blamed on speeding. On November 1, 1918, a Brooklyn Rapid Transit train derailed with a poorly trained young motorman in his first day on the job at the controls, killing 93 people, according to several histories of the event. Accounts of the train’s speed vary, but the Brooklyn prosecutor at the time blamed the accident on excessive speed and disregarding signals.

Commuters on Monday bemoaned their slower trips but some also expressed gratitude at not having been on the derailed train on Sunday.

Santa DeFeis, a 50-year-old legal secretary of Tarrytown, New York, said she had to add 20 minutes to her commute to drive to another rail station on a line not affected by the accident.

“It’s a big inconvenience,” she said. “But it was a tragedy what happened. People lost their lives.”

“I think the conditions are there” for a successful conclusion to the talks, Santos told an audience of academics, students and diplomats at the University of Miami. “Things are moving hopefully in the correct direction.”

But he quoted a Colombian proverb as a cautionary note, saying, “The bread can very well burn right at the door of the oven.”

Santos, a Harvard-educated journalist, spoke eloquently in English about his hopes for peace and economic growth in Colombia during a 30-minute speech at the invitation of University of Miami President Donna Shalala, who awarded him the school’s President’s Medal for service to society.

Santos, on his second official visit to the United States since taking office in 2010, hailed both the year-old peace talks as well as economic progress at home.

“It’s a different scenario” when the president of Colombia visits the United States these days, he said, comparing conditions at home to a decade ago when a guerrilla insurgency was raging on the outskirts of the capital Bogota and Washington was pouring in military aid to back the government.

Since then the war had dramatically turned in the government’s favor. “We are now being respected internationally,” Santos said, noting that his meeting Tuesday with Obama would not be focused on military aid but rather on education and technology, as well as regional security.

“Usually when the president came to the United States he would have gone to the Southern Command,” he said referring to the U.S. regional military headquarters based in Miami. “Now he will come to the University of Miami. In a way this shows how things have changed.”

While the United States and Colombia enjoy close ties, Santos said things could be better between Washington and the rest of Latin America, where left-wing governments led by Venezuela have shunned the United States.

Half a century after President John F. Kennedy started the Alliance for Progress to forge better ties between the United States and Latin America, Santos said he planned to ask Obama to launch something similar to help rebuild frayed relations with the region.

“Maybe it’s time to launch another Alliance for Progress,” he said, suggesting it be called an Alliance f
Former US president George W Bush accidentally refers to "unjustified" war in Iraq