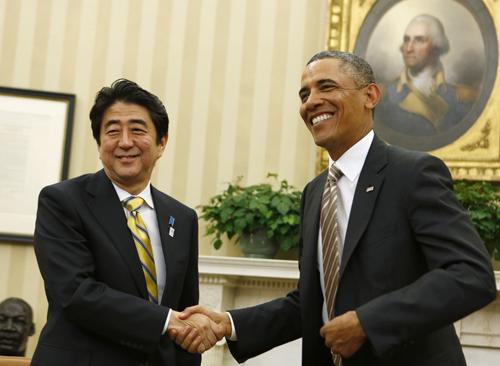 PHUKET: Japanese Prime Minister Shinzo Abe told Americans yesterday “I am back and so is Japan” and vowed to get the world’s third biggest economy growing again and to do more to bolster security and the rule of law in an Asia roiled by territorial disputes.

Abe had firm words for China in a policy speech to a top Washington think-tank, but also tempered his remarks by saying he had no desire to escalate a row over islets in the East China Sea that Tokyo controls and Beijing claims.

“No nation should make any miscalculation about the firmness of our resolve. No one should ever doubt the robustness of the Japan-U.S. alliance,” he told the Center for Strategic and International Studies.

“At the same time, I have absolutely no intention to climb up the escalation ladder,” Abe said in a speech in English.

After meeting US President Barack Obama on his first trip to Washington since taking office in December in a rare comeback to Japan’s top job, he said he told Obama that Tokyo would handle the islands issue “in a calm manner.”

“We will continue to do so and we have always done so,” he said through a translator, while sitting next to Obama in the White House Oval Office.

Tension surged in 2012, raising fears of an unintended military incident near the islands, known as the Senkaku in Japan and the Diaoyu in China. Washington says the islets fall under a US-Japan security pact, but it is eager to avoid a clash in the region.

Abe said he and Obama “agreed that we have to work together to maintain the freedom of the seas and also that we would have to create a region which is governed, not by force but based on an international law.”

Abe, whose troubled first term ended after just one year when he abruptly quit in 2007, has vowed to revive Japan’s economy with a mix of hyper-easy monetary policy, big spending, and structural reform. The hawkish leader is also boosting Japan’s defence spending for the first time in 11 years.

“Japan is not, and will never be, a tier-two country,” Abe said in his speech. “So today … I make a pledge. I will bring back a strong Japan, strong enough to do even more good for the betterment of the world.”

“Abenomics” to boost trade
The Japanese leader stressed that his “Abenomics” recipe would be good for the United States, China and other trading partners.

“Soon, Japan will export more, but it will import more as well,” Abe said in the speech. “The US will be the first to benefit, followed by China, India, Indonesia and so on.”

The United States and Japan agreed on language during Abe’s visit that could set the stage for Tokyo to join negotiations soon on a US-led regional free trade agreement known as the Trans-Pacific Partnership.

In a carefully worded statement following the meeting between Obama and Abe, the two countries reaffirmed that “all goods would be subject to negotiations if Japan joins the talks with the United States and 10 other countries.

At the same time, the statement envisions a possible outcome where the United States could maintain tariffs on Japanese automobiles and Japan could still protect its rice sector.

“Recognizing that both countries have bilateral trade sensitivities, such as certain agricultural products for Japan and certain manufactured products for the United States, the two governments confirm that, as the final outcome will be determined during the negotiations, it is not required to make a prior commitment to unilaterally eliminate all tariffs upon joining the TPP negotiations,” the statement said.

Abe repeated that Japan would not provide any aid for North Korea unless it abandoned its nuclear and missile programs and released Japanese citizens abducted decades ago to help train spies.

Pyongyang admitted in 2002 that its agents had kidnapped 13 Japanese in the 1970s and 1980s. Five have been sent home, but Japan wants better information about eight who Pyongyang says are dead and others Tokyo believes were also kidnapped.

Abe also said he hoped to have a meeting with new Chinese leader Xi Jinping, who takes over as president next month, and would dispatch Finance Minister Taro Aso to attend the inauguration of incoming South Korean President Park Geun-hye next week.