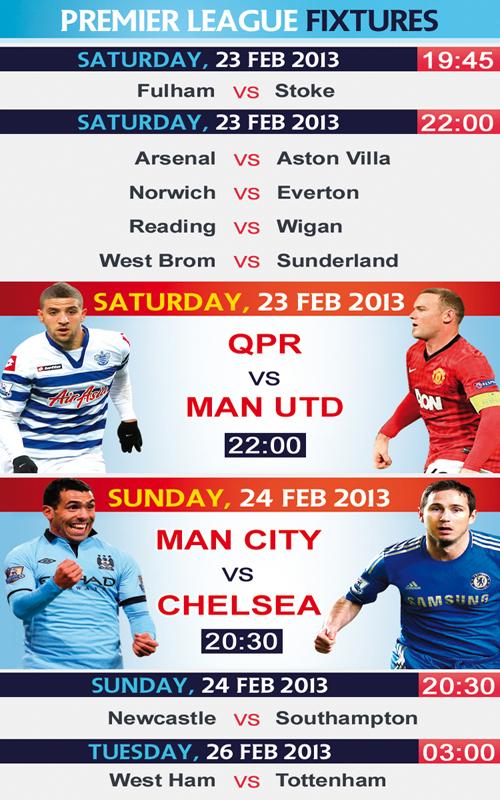 PHUKET: If Mario Balotelli had left his “Why Always Me?” T-shirt behind in Manchester, his former manager Roberto Mancini might well have fancied wearing it yesterday.

The Manchester City boss, who used to joke that all his news conferences started with questions about fellow Italian Balotelli before the striker’s move to AC Milan last month, greeted the new must-ask query about his future at the English champions with an expletive.

“I cannot continue to answer about this every week,” he fumed after first swearing when asked about media reports suggesting Malaga’s Manuel Pellegrini could be in line to take over at City at the end of the season.

“I don’t understand the reason for this – why would Manchester City change their manager? For which reasons?

“In the last 18 months after 2011 since Manchester United won the Premier League and we won the FA Cup, there were seven trophies (to play for) and Manchester City won three of those,” he added, referring to the league, FA Cup and Community shield.

“I’m not the chairman or CEO, if you want to ask these questions maybe ask them.”

City could be 15 points behind Premier League leaders Manchester United by the time they host third-placed Chelsea on Sunday (19:30 PHUKET) but Mancini said they were not merely scrapping for the runners-up spot.

“Our target is of course the battle to win the Premier League, we don’t play (for) second,” he said.

City have 53 points from 26 games, four more than Sunday’s visitors, and anything other than victory over Chelsea will leave Mancini facing yet more questions about his future.

His team will probably take on Rafael Benitez’s men without captain Vincent Kompany, whose recovery from a calf injury is taking longer than expected. Midfielder Gareth Barry will also face a late fitness test with an ankle problem, Mancini said.

“When we lose Vinny it is difficult for us,” the Italian said of the Belgian centre back whose commanding presence was one of the keys to last season’s title-winning campaign.

Mancini’s frustration at being asked again about his future comes in a week when Arsenal manager Arsene Wenger also lost his cool over similar questions earlier in the week.

But the City manager did manage to look on the bright side.

“In Italy it is worse, there are some teams that sometimes change manager three or four times in one year,” he said. “It is an improvement (in England).”

“Why me and not Moyes?” asks West Ham’s Allardyce
Reuters / Phuket Gazette

PHUKET: West Ham United manager Sam Allardyce questioned yesterday why his job is under more scrutiny than his Everton counterpart David Moyes when both bosses’ contracts are up at the end of the season.

Speculation has continued to grow about Allardyce’s future at West Ham with club hero Paolo Di Canio linked with his job after the Italian resigned at third tier Swindon Town four days’ ago.

“It’s a bit of an old hat story because we’ve been talking about it for such a long time,” Allardyce, whose direct style of play does not appeal to many West Ham fans, told reporters.

“But you haven’t been talking about David Moyes in the same context.

“His contract is up at Everton this year and it doesn’t look like there has been any negotiations.

“I’ve clearly explained to everybody several times this is a both parties’ agreement. Both parties will sort it out privately and confidentially when the time is right.”

Allardyce has yet to discuss a new deal with West Ham co-owners David Sullivan and David Gold, but they have said talks would start when the club’s Premier League safety was secured.

West Ham, who host Tottenham Hotspur on Monday, are 11th in the Premier League with 30 points from 26 games. Everton are 12 points and five places above West Ham.

PHUKET: Arsenal manager Arsene Wenger adopted a fresh approach yesterday to the persistent questions over his future, swapping tetchiness for humour as he stressed he was committed to getting the best out of his beleaguered side.

The Frenchman has endured a series of back-page headlines to forget this week after a 3-1 home defeat by Bayern Munich in their Champions League last-16 first leg followed a humiliating 1-0 loss to second-tier Blackburn Rovers in the FA Cup.

He snapped his way through a news conference on Monday after what he said was incorrect information that he had agreed a two-year contract extension but yesterday was in a calmer mood when asked whether he had been unfairly scrutinised this week.

“It’s not down to me to judge, my responsibility is to keep the guidelines and to guide the team and the club into what I think is right,” he told a news conference.

“I will not come out with my feelings because that is not my job. I feel what is important for me is to focus on the next game and try to give my best like all the players.”

Demonstrating he was still as motivated as ever after being in the job since 1996, he issued a challenge to one reporter in jest.

“I do think that spark is nothing to do with the length of your life. It’s just that’s how you are. You are motivated by how much you want to win and how much you win,” he said.

“If I go out now and play with you one against one you will see that I will beat you and at least if I don’t manage to beat you I will want to beat you so that will not change as long as I can move.

“We can organise that if you want,” he added before the reporter told him his knee was not what it used to be.

“Don’t look for excuses before the game,” he grinned.

Huge desire
While he might have made time for jokes, his team’s season has become no laughing matter.

Any realistic chances of silverware have vanished, leaving the north London club trophyless for an eighth season, and the only sliver of redemption would be finishing in the top four of the Premier League to secure a Champions League berth.

Sitting fifth with 44 points from 26 games, four behind fourth-placed Tottenham Hotspur and a further point away from third-placed Chelsea with Everton, in sixth, breathing down their necks, Arsenal cannot afford any more slip-ups.

“We are in a position where we cannot afford to drop points. We will go into the game with a huge desire to get out the disappointments we have had,” Wenger said.

“Apart from Manchester United, for all the other positions, I feel it’s very open. It’s just down to us now to continue to be consistent like we have been. We have to focus on continuing to get the points.”

Asked if he had felt like quitting this week, Wenger was emphatic.

“I have a contract until the end of 2014 and at the moment we are on a short-term plan. I have been here for a long time and have to consider what I want to do. That will be decided in 2014, not before.”