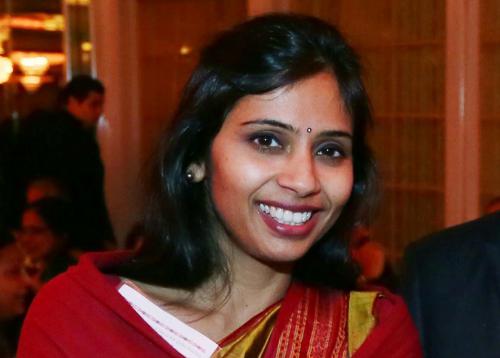 
India diplomat indicted, asked to leave U.S.
Reuters / Phuket Gazette
PHUKET: The Indian diplomat whose arrest and strip-searching in New York caused a major rift between India and the United States was indicted for visa fraud on Thursday, and the U.S. government immediately asked her to leave the country.

A U.S. government official said Washington accepted a request by India to accredit the diplomat, Devyani Khobragade, at the United Nations and then asked New Delhi to waive the diplomatic immunity that status conferred. India denied the request, leading Washington to ask for her departure, the official said.

In a letter accompanying her indictment on Thursday, the prosecutor in the case, U.S. Attorney Preet Bharara in Manhattan, initially said Khobragade had left the country.

Shortly afterwards, a spokesman for Bharara said in a statement that she had not left.

A lawyer for Khobragade confirmed this.

“Despite Preet Bharara’s reports to the contrary, Devyani Khobragade has not left the country,” Daniel Arshack, her lawyer, said in a statement. “She is at home with her children.”

There was no immediate comment from the Indian embassy in Washington or its mission to the United Nations.

Khobragade, who was deputy consul-general in New York, was arrested December 12 and charged with one count of visa fraud and another of making false statements about how much she paid her housekeeper.

Her arrest set off protests in India amid disclosures that she was strip searched on the day of her arrest. It also soured the broader U.S.-India bilateral relationship, leading to the postponement of two visits to India by senior U.S. officials and another by a U.S. business delegation.

Furious at Khobragade’s treatment, India has curtailed privileges offered to U.S. diplomats and ordered the U.S. Embassy to close a club for expatriate Americans in New Delhi.

The arresting authority, the U.S. Marshals Service, characterized the strip search as a routine procedure imposed on any new arrestee.

Khobragade’s departure would remove the focus of current friction between New Delhi and Washington, but it is unclear how long it will take the anger to subside in the run up to national elections in India in May.

The case has exposed underlying problems in a bilateral relationship that has failed to live up to its billing by President Barack Obama in 2010 as “a defining partnership for the 21st Century.”

Critics accuse Obama of failing to pay sufficient attention to ties with a country viewed as a key strategic counterbalance to China and as an engine to boost the U.S. economy, while U.S. hopes of building a more robust business relationship with India have run into bureaucratic hurdles.

Frustration has grown among the U.S. corporate lobby. Indian sourcing rules for retail, information technology, medicine and clean energy products are contentious and U.S. firms complain about “unfair” imports from India of everything from shrimp to steel pipes. In June, more than 170 U.S. lawmakers signed a letter to Obama about Indian policies they said threatened U.S. jobs.

Daniel Markey, senior fellow for India, Pakistan and South Asia at the Council on Foreign Relations, said the Khobragade case made it appear the Obama administration had taken its eye off the ball on the relationship with India.

“The question is why this wasn’t managed in a more sophisticated or subtle way, because things can be managed more effectively. This was always going to be an issue, but it could have been resolved more rapidly with less fanfare.”

Speaking at a seminar on Thursday, Ron Somers, president of the U.S.-India Business Council blamed “bumbling on both sides” for the Khobragade affair.

“We have to do some thinking on this side as to what has there been in the way of frustration that allowed this incident to provoke and spill over as it has,” he said.

“We really need now to be building trust and taking an introspective look at whether we really mean what we say when we talk about strategic partnership and how do we get there.”