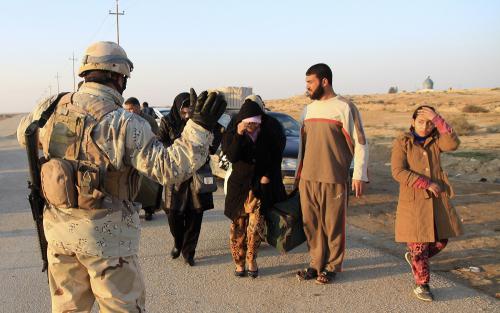 
Bewildered Falluja residents flee feared Iraq army assault
Reuters / Phuket Gazette
PHUKET: Iraqis fleeing from Falluja question whether the masked gunmen who overran their city 10 days ago are really al Qaeda-linked militants as the government says, but fear their presence will draw a ferocious response from the army regardless.

At a motel in Iraq’s Kurdish north, Falluja residents said they were stunned by the speed of the takeover of the city in Sunni-dominated Anbar province, predicting a tough fight if the Shi’ite-led government orders troops to retake it.

Al Qaeda-linked militants, who are also fighting in neighbouring Syria, have been regaining ground over the past year in Anbar, which they seized in 2006-07 before being forced out by local tribal militia and occupying U.S. troops.

Some witnesses say some of the gunmen initially raised black al Qaeda flags over police stations they captured in Falluja and appealed to local citizens for support over mosque loudspeakers during Friday prayers a week ago.

But those flags have now gone and residents said they did not believe the gunmen, who guard the streets at night and told them they had nothing to fear, were members of the al Qaeda-affiliated Islamic State of Iraq and the Levant (ISIL).

“We didn’t see a strong armed presence representing ISIL, only masked gunmen carrying weapons,” said Monzher Hazallah, an engineer who has spent several days at the motel with his family of nine. “We don’t know who they are. They are masked.”

Falluja is the latest frontline in a war by Prime Minister Nuri al-Maliki’s government against what it says are ISIL militants. Many Iraqis say Sunni grievances against the government have made it a wider fight.

Whether the armed men now in Falluja are ISIL, or local Sunni tribesmen who oppose the government’s perceived mistreatment of their sect, is hard to establish. Either way, residents are fearful.

“There are government forces and gunmen, and we are caught in the middle,” said Adel Abdullah Hussein, who hurriedly left Falluja with his family on Saturday and is now paying $80 a night for a dingy room in Arbil’s New City Motel.

The exodus from Anbar has swollen the total of more than one million people already internally displaced within Iraq.

Maliki has promised to crush al Qaeda in Iraq, but has said the tanks and troops now ringing Falluja will not enter the city if local tribes expel the “terrorists” themselves.

Some Falluja residents said Maliki had branded them as such to gain international support for an offensive. One said he did not think they were ISIL, adding “We don’t know what the truth is.”

Asked what they expected if the army attacked, the refugees said Falluja, where U.S. forces fought some of their fiercest battles of the Iraq war, was sure to resist any new incursion. One resident foresaw “total destruction”.

Several said they were concerned the army was not well enough trained to limit civilian casualties, and that expelling the gunmen was impossible and fighting them difficult as they could blend in with the population, making everyone a target.

“These gunmen can take off their masks and sit in any house, cafe or shop. They don’t have a base or a particular place, so the war will be difficult,” Hazallah said.

Hussein said the army might take an indiscriminate approach. “With the Americans, at least it was clear they were just after the terrorists, but now they (Iraqi forces) mix everyone up: terrorist and non-terrorist, poor people and traders,” he said.

There are no official figures for the number of people from Anbar who have sought shelter in Kurdistan, but the United Nations says a total of more than 11,000 families have fled their homes in the province in recent days.

Several hundred have taken refuge in the Shi’ite holy city of Kerbala, staying at a camp normally used by pilgrims and being cared for by shrine administrators, a local official said.

Abdel Kareem, who left Falluja five days ago with his family of 10, said mortar fire from the army had killed one of his neighbours. “The army is shelling residential districts – you don’t know where it will come from next.”

With the family’s belongings piled in a pickup truck in the motel parking lot, he said Kurdistan had been the only place they could escape. “Where can you go? Baghdad is difficult, it’s blocked off, the Ramadi area is blocked, there was no route except the one leading in this direction,” he said.

The Kurds have managed to insulate their autonomous enclave in northern Iraq from the violent instability that afflicts much of the rest of the country. Kurdistan is already a popular holiday destination for Iraqi Arabs seeking respite from the near-daily bombings that blight other provinces.

ISIL has tightened its grip in Anbar over the past year with the stated aim of creating a Sunni state straddling western Iraq and eastern Syria. Its violent campaign has helped drive bloodshed in Iraq to its highest level since 2008.

Officials in Baghdad say the civil war in neighbouring Syria has inflamed Sunni-Shi’ite tensions across the region, Many Iraqis say Maliki has also fuelled Sunni discontent.

“Maliki’s policies towards Anbar over the past year have created a gap between the people and the government,” said Hazallah. “Like it or not, Maliki himself has recruited a large part of the city’s youth to the ranks of the militants.”

He suggested the crackdown on al Qaeda was timed as part of Maliki’s campaign to win parliamentary polls in April, saying: “The elections are near – he wants to be a Shi’ite hero.”