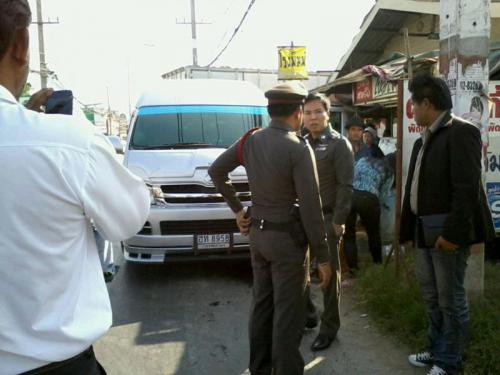 The first attack happened at the Kokwua Intersection on Tanaosri Road at 2am, according to Pol Lt Thaweerat Thamrongwattanakul of the Chana Songkram police station.

Police and rescue volunteers rushed to the scene to find two men injured. One of them, Erawat Kaewsee, 28, was shot at his right shoulder. The other man was not identified. He was shot at his left thigh and right leg. Both were rushed to the Bangkok Metropolitan Administration Central Hospital.

Witnesses told police that four or five motorcyclists raced from Phra Pinkloa Bridge and opened fire at a taxi near Krua Rajdamnoen restaurant and more sounds of gunfire and explosions were heard near the Government Lottery Office and at the Kokwua Intersection.

While, reporters and photographers were inspecting the shooting scene at the Kokwua Intersection, sounds of gunfire were head, sending the media crew to flee.

A cameraman of ThaiPBS, Panuwat Ritthitham narrowly escaped a hit as a bullet graced his left leg and pieced through his trousers.

More sounds of gunfire and explosions were heard throughout the early morning. Police said they received reports that at least seven guards were injured.

The Election Commission yesterday suggested that the government start anew the election process because of many problems that have complicated the run-up to the February 2 polls.

The EC asked the government to call for a royal decree authorising a new election date. It noted an absence of election candidates in many constituencies. The agency also pointed to concerns expressed by the Office of the Auditor-General that if the February 2 date is maintained, it could be a waste of more than Bt3 billion.

Meanwhile, the permanent secretary of the Public Health Ministry yesterday became the first high-ranking bureaucrat to be investigated by the government’s Centre for the Administration of Peace and Order (CAPO) for his alleged involvement in a statement calling on the government to resign.

“All officials must comply with laws and regulations. They violate the law if they do not work. Narong will be disciplined if he is found guilty,” Pradith said.

Such discipline would be administered by CAPO, as the country is now in an abnormal situation.

Pradith said he would also set up a fact-finding committee on Narong’s actions.

“It is not proper for him to do something like this as he is a senior officer of the ministry,” he said.

Narong and numerous other officials of the Public Health Ministry gathered as a group they called the “Public Health Assembly” and issue a third statement asking the caretaker government to undergo political reform before pressing ahead with the election. They also urged it to resign to pave the way for such reform.

They also announced they would not work with this government as it lacks authority to administer the country. However, they said they would still provide services for people.

“I really feel that I am being myself after I decided to join the assembly to issue this statement,” Narong told the MCOT television station. “I also was not worried about my position, as I wanted to express my political standpoint that I want reforms before the election.”

However, he said he would not resign and would work to provide medical services to members of the public.

After Narong issued the strong statement against the government, there was a report that other top officials of the Public Health Ministry had issued a counter-statement supporting the election scheduled for February 2, saying ministry officials should be politically neutral.

Medical Services Department director-general Dr Suphan Srithamma denied that report but said all officials must continue their jobs to provide services to people. If they want to join demonstrations, they should do so after office hours.

Meanwhile, the ministry’s deputy permanent secretary, Dr Chanvit Tharathep, said health officials should follow the Civil Servants Act and maintain discipline because the election had already been endorsed by the law that designated Yingluck as caretaker prime minister.

“I think nobody should issue a statement like this in the name of [public] officials,” he said. A source said there was a meeting of the top officials of all ministries on Thursday but no statements had been issued to express a political stance.

“The top officials at the meeting agreed that they must continue their jobs. If the protesters block the ministries they will move to another place to work, as they do not want to confront the protesters,” the source said.

“Most of the permanent secretaries do not want to endorse the power of the People’s Democratic Reform Committee as the royal decree for House dissolution is still in place. The country must [therefore] go ahead with the election” unless it is legally postponed.

No leave for health officials

Public Health Ministry officials and all government doctors have been instructed not to take leave, except sick leaves and duty tours, in preparation for extra duties during the “Bangkok shutdown” campaign by anti-government protesters starting on Monday.

In a related development, a group of university rectors yesterday called for the February 2 election to be postponed to prevent possible violence and the caretaker prime minister to be replaced by a person who is “politically neutral”.

“In principle, the caretaker government should be headed by a neutral prime minister. So the current caretaker prime minister may have to be replaced,” said Professor Rajata Rajatanavin, chairman of the Council of University Presidents of Thailand.

The council, which has members from 27 major state universities, convened yesterday amid rising political tension ahead of the planned siege of key parts of the capital.

Earlier yesterday, Yingluck urged the military to mediate between the People’s Democratic Reform Committee and the government in a bid to resolve the political stalemate.


45 countries issue travel warnings
The Nation / Phuket Gazette
PHUKET: Many countries have advised their nationals to stay away from demonstration sites on Monday and ensure that they have enough cash on them, a fully-charged communication device as well as enough food and water to last a while. They have also bee