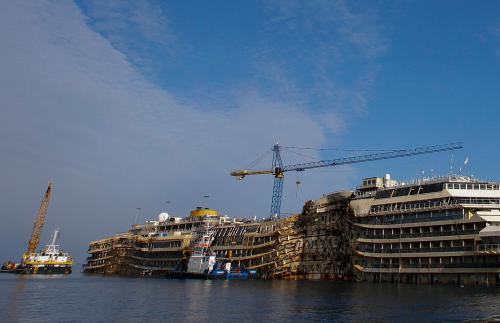 
Diver dies during Costa Concordia salvage works
Reuters / Phuket Gazette
PHUKET: A Spanish diver died on Saturday during work to salvage the Costa Concordia cruise liner, which capsized off the Italian island of Giglio two years ago, the company in charge of the salvage work said.

The diver worked for the Spanish company UCS (Underwater Contractors Spain) and was involved in an underwater operation when the incident occurred, an official at Titan Micoperi said. Further details were not available.

The 114,500-tonne vessel hit rocks on January 13, 2012, killing 32 people. It was hauled upright in a complex “parbuckling” operation in September but still rests where it capsized, just outside the holiday island’s small port.

Divers are working to attach 30 massive tanks filled with air to the liner so that it can be lifted off the seabed in June and towed away to be dismantled, completing what will be the largest maritime salvage operation in history.