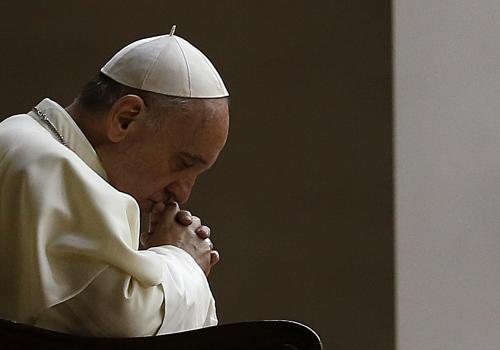 
Vatican removes deputy bishop in Peru after sex abuse allegations
Reuters / Phuket Gazette
PHUKET: The Vatican, under Pope Francis’ “zero-tolerance” policy for paedophile priests, removed an auxiliary bishop from his post in a Peruvian province because of allegations he sexually abused children, a bishop said on Friday.

Luis Bambaren, the former president of Peru’s bishops’ conference and bishop emeritus of Chimbote, told local media that Gabino Miranda was dismissed as auxiliary bishop in the dioceses of Ayacucho, a poor Andean region in southern Peru, after he was accused of having sexual relations with minors.

“It is what the Pope said – zero tolerance,” Bambaren said on RPP radio. “Those are very serious crimes, especially when it has to do with a bishop.”

A Church official confirmed to Reuters that Miranda, 53, had resigned from Peru’s bishops’ conference but declined to say why.

The attorney general’s office said on Friday that it was investigating Miranda and would announce actions soon.

Reuters was not able to reach Miranda for comment, but conservative Catholic group Opus Dei said that Miranda has denied the abuse allegations.

“He denies any crime related to minors,” Opus Dei in Peru said in a statement on Friday.

The group said that while Miranda had received “spiritual assistance” from an organization closely linked to Opus Dei – the Priestly Society of the Holy Cross – Miranda is not a member of Opus Dei.

“Gabino Miranda has never been incardinated in the clergy of Prelature of Opus Dei,” the statement said.

Shortly after becoming pope in March, Francis directed the Vatican to act quickly when clergymen are suspected of sexually abusing children, and vowed to punish paedophiles in the Church.

Francis has set a new tone in a Church beset by scandals with his informal style and emphasis on helping the poor instead of criticizing homosexuality, contraception and abortion.

In a dramatically blunt interview published on Thursday by an Italian Jesuit journal, Francis said the Church had “locked itself up in small things, in small-minded rules” and should not be so prone to condemn.

Local media reported that last week Francis met with Peruvian priest Gustavo Gutierrez, considered a key founder of the liberation theology movement popular in the 1970s that urged clergy to take active roles in improving the lot of the poor.

Chicago has been struggling with gun violence for years, which hurt the city’s reputation and put pressure for change on Mayor Rahm Emanuel.

“I can tell you that it’s an ongoing investigation,” Chicago Police Department spokeswoman Amina Greer said on Friday.

No arrests have been made so far, Greer said, adding that police believe the motive for the shooting was gang-related.

According to witnesses, gunfire rang out late Thursday as gunmen sprayed a basketball court with bullets in a park in the city’s Ninth District.

“We were sitting in the park talking, then two dudes came up, stood by the gate for a minute, then they just started shooting,” said Michelle Adams, 16.

Other witnesses said the gunmen had driven up and fired on the basketball court from their vehicle.

Mayor Emanuel cancelled two meetings in Washington on opportunities for Chicago and was headed back to his city after being notified about the shooting, his press office said.

“Senseless and brazen acts of violence have no place in Chicago and betray all that we stand for,” Emanuel said in a statement. “The perpetrators of this crime will be brought to justice and prosecuted to the full extent of the law.”

Police said that besides 3-year-old Deonta Howard, those injured ranged in age from 15 to 41.

As of Friday morning, three of the gunshot victims, including Howard, were in serious to critical condition in area hospitals.

Howard was in surgery, said Naphtali Dukes, 38, who said he was the boy’s cousin.

“They said he’s going to make it,” Dukes said.

Gun violence in Chicago led to more than 500 murders in 2012, according to a report this week by the FBI.

By comparison, New York City, with a population three times Chicago’s, had 419 murders in 2012, the FBI said.

So far this year, the city’s murder rate is down 22 percent from a year earlier. Chicago Police Superintendent Garry McCarthy has said recently that murders were down 45 percent in 20 neighbourhoods targeted since February for additional police, including expanded use of foot patrols.

One Chicago murder this year that caught national attention was of Hadiya Pendleton, 15, an honour student killed at a park just days after she performed at a January presidential inauguration event in Washington.

Other notorious Chicago killings include the death of a 7-year-old girl last summer at her mother’s candy stand and the shooting of a 6-month-old baby last March by a gang member who was aiming at her father.

Chicago’s crime problem is just one of a host of issues plaguing Emanuel. The former White House chief of staff under President Barack Obama pledged to clean up the streets of the city after a successful, well-financed run for office in 2011.


Merkel fights for majority in tight German election race
Reuters / Phuket Gazette
PHUKET: Chancellor Angela Merkel looked on track to win a third term in a weekend election in Germany but faced a battle to preserve her centre-right majority and avert a potentially divisive coalition with her arch-rivals, the centre-left Social Democrats (SPD).

The vote on Sunday is being watched across Europe, with many of Berlin’s partners hoping it will bring about a softening of the austerity-first approach Merkel has promoted since the euro zone debt crisis broke out nearly four years ago.

But the prospect of major shifts in her euro policy are slim, even if she is forced into a “grand coalition” with the SPD, whose candidate Peer Steinbrueck has criticised the chancellor for choking off growth in southern members of the currency bloc by insisting on spending cuts and painful reforms.

Two days before the vote, a survey by Forsa for private broadcaster RTL showed Merkel’s conservatives – the Christian Democratic Union (CDU) and its sister Bavarian party the Christian Social Union (CSU) – 14 points ahead of the SPD, meaning she will almost surely return for