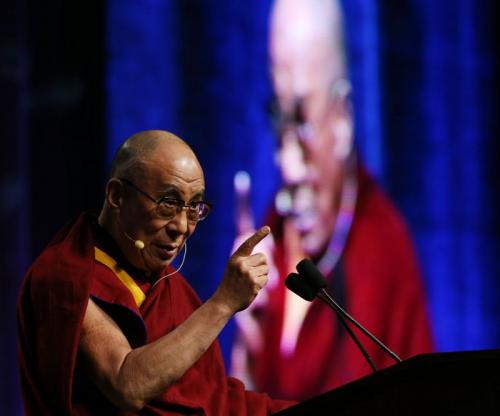 The Dalai Lama, a foremost Buddhist leader, told an audience at the University of Maryland at the start of a U.S. tour that the root of seemingly sectarian conflict was political, not spiritual.

“Really, killing people in the name of religion is unthinkable, very sad. Nowadays even Buddhists are involved in Burma,” another name for Myanmar, with monks attacking Muslim mosques, the Nobel Peace Prize laureate said after delivering the Anwar Sadat Lecture for Peace at the university.

“I think it is very sad,” he said, adding, “I pray for them (the monks) to think of the face of Buddha,” who had been a protector of Muslims.

A wave of sectarian violence erupted in March in the central Myanmar town of Meikhtila, causing 44 deaths and displacing an estimated 13,000 people, mostly Muslims.

A Reuters investigation found that radical Buddhist monks had been actively involved in the violence and in spreading anti-Muslim material around the country.

Sectarian clashes between Buddhists and Muslims, who make up about 5 percent of Myanmar’s population, have erupted on several occasions since a quasi-civilian government took power in March 2011 after five decades of military dictatorship.

The 77-year-old Dalai Lama also urged his largely student audience of 15,000 to create a new world in the 21st century, saying that he was a man of the last century.

“That group of individuals of the 20th century are ready to say bye-bye,” Tibet’s most revered spiritual leader said. “You have the responsibility to create a new world based on the concept of one humanity.”

China brands the Dalai Lama, who fled into exile to India in 1959 after an abortive uprising against Chinese rule of Tibet, as a separatist. The Dalai Lama says he is merely seeking more autonomy for his Himalayan homeland.

The address in College Park, Maryland, was the start of a U.S. visit that includes stops in Oregon, Wisconsin, Kentucky and New Orleans, Louisiana.


U.S., Russia push for rapid talks to end Syria carnage
Reuters / Phuket Gazette
PHUKET: Russia and the United States have agreed to bury their differences over Syria and hold urgent international talks to find a settlement that can end the carnage of a civil war that is inflaming the entire Middle East.

Visiting Moscow after Israel bombed targets near Damascus and as President Barack Obama faces new calls to arm the rebels, U.S. Secretary of State John Kerry said Russia had agreed to try to arrange a conference as early as this month involving both President Bashar al-Assad’s government and his opponents.

East-West disagreement that has seen some of the frostiest exchanges between Washington and Moscow since the Cold War has deadlocked U.N. efforts to settle the Syrian conflict for two years, so any rapprochement could bring an international common front closer than it has been for many months.

But with Syria’s factional and sectarian hatreds more entrenched than ever after 70,000 deaths, it is far from clear the warring parties are ready to negotiate. There was no immediate comment from the Syrian government, which has offered reforms but dismisses those fighting it as “terrorists”.

The late hour of the announcement in Moscow – Kerry was kept waiting for three hours by President Vladimir Putin – also meant leaders of the Western-backed opposition umbrella group the Syrian National Coalition were not available for comment. Many on the body have insisted Assad’s exit is a condition for talks.

Inside the country, where rebel groups are numerous and have disparate views, a military commander in the north, Abdeljabbar al-Oqaidi, told Reuters he would want to know details of the U.S.-Russian plan before taking a view: “But,” he added, “if the regime were present, I do not believe we would want to attend.”

Alarmed at the prospect of the conflict spilling across an already volatile and economically important region, however, the major powers have, as Kerry told Putin late on Tuesday, “very significant common interests” in pushing for a settlement.

“The alternative,” Kerry later told a joint news conference with Russian Foreign Minister Sergei Lavrov, “is that Syria heads closer to an abyss, if not over the abyss and into chaos.

A year ago, at a conference in Geneva in June, Washington and Moscow agreed on the need for a transitional government in Syria but left open the question of what would happen to Assad, whose departure Obama has called for but which Russia, accusing the West of meddling, says should be a matter for Syrians only.

Rejecting a characterisation of Moscow as the protector of Assad, to whose army it has been a major arms suppliers since the days of his father’s rule, Lavrov insisted Russia was not concerned by the fate of “certain” individuals.

“The task now is to convince the government and all the opposition groups … to sit at the negotiating table,” he said.

Kerry said the conference should be held “as soon as is practical – possibly and hopefully by the end of the month”. Neither he nor Lavrov said where it might take place.

Kerry said there would be “a growing crescendo of nations who will want to push for a peaceful resolution, rather than the chaos that comes with the breakup of a country”.

Although the United States has said Assad should not be part of a transitional government in Syria, Kerry said the decision on who takes part in it should be left to the Syrians.

Lavrov said the aim would be “to persuade the government and the opposition together … to fully implement the Geneva communiqué” on creating a transitional government.

Recent developments have helped focus minds on the risks of wider war in the Middle East: intelligence reports that Assad’s troops may have used chemical weapons had renewed calls for Obama to arm the rebels or even offer U.S. forces; Islamist fighters pledging allegiance to al Qaeda has highlighted how some of the rebels are also hostile to the West; and Israeli air strikes in the past few days, said to target Iranian arms headed for Lebanon’s Hezbollah, have underlined the risk of escalation.

Speaking before the announcement in Moscow, Assad was quoted by a sympathetic Lebanese television channel as saying he would defy Israel, the United States and Arab powers who oppose him: “The recent Israeli aggressions expose the extent of the complicity between the Israeli occupier, regional countries and the West in promoting the current events in Syria,” he said.

“The Syrian people and their heroic army … are capable of confronting this Israeli adventure, which represents one of the faces of terrorism that is targeting Syri