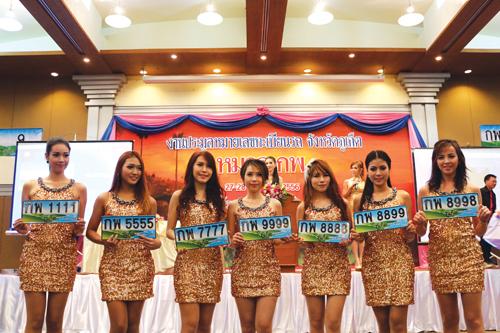 This year, a total of 301 “Gor Por” series (the first two Thai characters) license plate numbers were auctioned off to an eager group of elite yet superstitious bidders, including at least three automobile accident victims.

The method of auction was what is known in Thai as “Ja Ja“, in which final bids are confirmed with the strike of a gavel.

In Thai-Chinese belief, the number 8 represents infinity, while the number 9 symbolizes progress, since the word for the number 9, in Thai, gao, also means ‘step up’ or ‘step forward’.

Therefore, it was of little surprise that the highest final bid was made for the plate number 9999, which was auctioned for 1.45 million baht.

Maj Gen Prin Suwanthat said that the LTD held its first license plate auction in 2003, at the Grand Hyatt Erawan Hotel in Bangkok, for the Thai series of “Sor Ngor“, which generated a total of 45,222,000 baht.

Outside of Bangkok, the first auction was held in Phuket in 2004, for the “Kor Jor” series. That auction generated just over 8 million baht.

Although seeming like a small amount, Maj Gen Prin assured that it was not less than any other province of that time.

Since then, Phuket has held a lucky license plate auction nearly every year, with the total amount of funds raised in all eight auctions just over 147 million baht, he said.

Maj Gen Prin went on to explain that the DLO puts the proceedings into a fund used to promote and support road and automobile safety campaigns. These include accident reduction campaigns launched during Thai New Year (the Songkran festival) and (western) New Year periods.

The Deputy Minister added that the campaigns will focus on raising road and automobile safety awareness and understanding, specifically among youth – from young children to teenagers.

He said that the fund is also utilized to acquire and implement new technologies, such as traffic cameras and lights, to help regulate and facilitate increased traffic safety.

Moreover, the fund will also be applied towards assisting injured and handicapped automobile accident victims to procure wheelchairs and prosthetic limbs, he concluded.

A glass of wheatgrass if you please