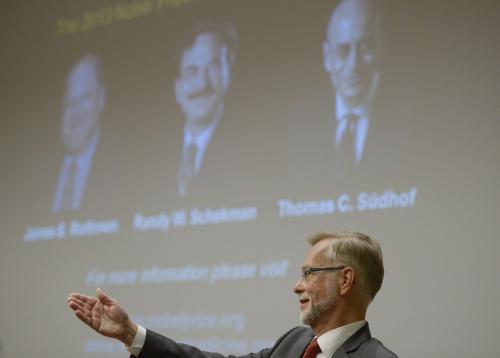 
Work on ‘cell traffic’ and disease wins Nobel prize
Reuters / Phuket Gazette
PHUKET: Three U.S.-based scientists won the Nobel medicine prize on Monday for plotting how vital materials such as hormones and brain chemicals are transported within cells and secreted to act on the body, giving insight into diseases such as diabetes and Alzheimer’s.

Americans James Rothman, 62, Randy Schekman, 64, and German-born Thomas Suedhof, 57, separately mapped out one of the body’s critical networks that uses tiny bubbles known as vesicles to ferry chemicals such as insulin within cells.

The system, which also describes how vesicles transport molecules to the cell surface for secretion, is so critical and sensitive that errors and disruption in the mechanism can lead to serious illness or death.

“Without this wonderfully precise organisation, the cell would lapse into chaos,” the Nobel Assembly at Sweden’s Karolinska Institute said in a statement when awarding the prize of 8 million crowns (746 thousand pounds).

“Through their discoveries, Rothman, Schekman and Suedhof have revealed the exquisitely precise control system for the transport and delivery of cellular cargo.”

For example, their research sheds light on how insulin, which controls blood sugar levels, is manufactured and released into the blood at the right place at the right time, the Nobel committee said in the statement.

Diabetes and some brain disorders have been attributed at least in part to defects in the vesicle transport systems.

“My first reaction was, “Oh, my god!” said Schekman, who was woken with the good news in the early hours of his morning. “That was also my second reaction,” he added, according to a Berkeley University statement.

“It blew me over,” he told Reuters. “Every scientist dreams of getting a Nobel prize. It’s something I often tell my kids. If you lose your dreams you lose your reason to live.”

Medicine is the first of the Nobel prizes awarded each year. Prizes for achievements in science, literature and peace were first awarded in 1901 in accordance with the will of dynamite inventor and businessman Alfred Nobel.

Suedhof said the work was really about “cell traffic”, the ability of cells to move material around.

“We have met each other many many times and argued and sometimes agreed and sometimes disagreed,” he said of his fellow prize winners. “We really work in quite distinct areas of science.”

Professor Patrik Rorsman of Oxford University said the award was timely and well deserved. “It is such a fundamental process they have studied and explained.

“Their discoveries could perhaps have clinical implications in psychiatric diseases, but my guess is that they will be more useful for the understanding of how cells work.”

The committee said the work could help in understanding immuno-deficiency, as well as brain disorders such as autism.

Schekman, a geneticist, first became interested in how proteins move within cells in 1974. At the University of California, Berkeley, he began working on yeast, a single cell microorganism. Research showed his findings applied equally to human cells

Among Schekman’s research aims is to study whether the accumulation of the protein amyloid in the brains of Alzheimer’s disease patients is due to disruption of the vesicle system.

Suedhof, a neuroscientist, has focused particularly on the brain and questions of human thought and perception, emotions and actions determined by signalling between neurons, cells which constitute the foundation of the nervous system.

Jeremy M. Berg, director of the Institute for Personalized Medicine at the University of Pittsburgh, said the research had tackled key questions of how molecules are directed by vesicles to the cell wall and secreted to act on the body.

“It’s one of the prizes for which there is not a treatment that came out of it directly, but there are probably literally thousands of laboratories around the world whose work would not be taking place the way it is without their work.”

The savings, which have not yet been publicly disclosed, are part of the World Bank’s first major strategic realignment in 17 years. The $400 million figure will be presented to the World Bank’s member countries later this week during its annual meetings, along with a new strategy to focus the institution on its poverty-fighting goals.

The $400 million in savings will be phased in over three years and mark an 8 percent cut from the bank’s current $5 billion in annual expenses, Bertrand Badre, who is also the bank’s managing director for finance, said in an interview.

Badre said the ultimate goal of the cuts, along with planned increases in revenue, was to help the bank grow and better serve governments.

Long criticized for a slow bureaucratic process for approving lending, the World Bank has more recently had to contend with greater competition for development funds. Many middle-income countries, for example, can rely more on private funding and bilateral loans as they grow.

In response, World Bank President Jim Yong Kim has launched the first new strategy for the lender since 1996, aiming to make it more selective and better attuned to the needs of the governments it serves.

The strategy should make it easier for the bank to meet its twin goals of eliminating extreme poverty by 2030 and boosting the incomes of the poorest 40 percent of people in each country.

In its strategy, the bank said it was looking at ways to trim its budget while putting more funds into priority areas, including “transformational” projects such as large-scale energy investments.

He said every $100 million reinvested into the bank’s operations could help mobilize another $1 billion to spend on development.

The bank has not yet outlined exactly where it will find the savings, although Badre suggested travel policies, information technology and real estate would be good places to start. Many World Bank employees were