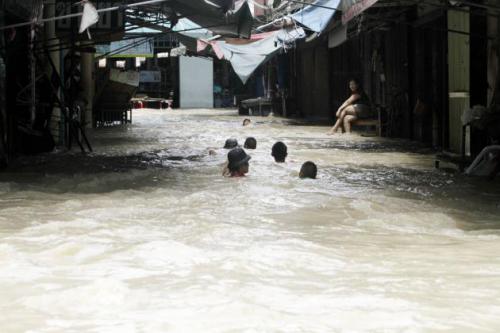 PHUKET: The Royal Irrigation Department is blaming the raging floods in the East on the lack of water-drainage options.

Many areas in the region have been under water for more than a month already.

“The region has been relying on local rivers for water draining; there’s nothing else,” the department’s deputy director general, Suthep Noipairoj, said yesterday.

He said that though there are plenty of reservoir projects in the works for the region, none of them has been completed yet. For instance, the Huai Samong Reservoir in Prachin Buri’s Nadi district is scheduled for completion in 2017.

“We need to invest more in this,” Suthep said, though he admitted that the continuous downpours were also to be blamed.

According to Prachin Buri Governor Jitra Phomchutima, her province has been getting about 200 millilitres of rain per day since September 19. The province spans an area of just over 7,500 square metres.

“The province has more than 1.1 billion cubic metres of water now,” she said.

Jitra went on to say that the only channel to drain water was through the Prachin Buri River, which is already brimming over.

The Disaster Prevention and Mitigation Department said 17 boats have so far been deployed on the river to help with the water drainage.

Neighbouring province Sa Kaew is also struggling with serious flooding. So far, about 100 families in Khao Chakan district have been evacuated due to high flood levels in their hometown.

As of press time, floods have ravaged 28 provinces and affected the lives of some 1.98 million people.

“The dam usually attracts tourists, but with the flooding nobody is showing up. We can’t earn anything,” she said.

PHUKET: The Government budgeted Bt120 billion to repair the vast damage from the Great Flood of 2011 and protect the country from repeat rainy-season disasters, but the recent swamping of at least 35 provinces shows the scheme has failed to do the job very well.

The Bt120-billion budget was allocated to 19 agencies including the Transport Ministry, Public Works and Town and Country Planning Department, Water Resources Department and Irrigation Department for 154 projects in 30 provinces under the flood recovery and reconstruction scheme.

Most of the projects were completed and were said to be ready to tackle flooding, until the recent deluge proved otherwise.

Prachin Buri’s case was a good example to show that the equipment and construction could not control and prevent flooding, Assoc Prof Bancha Kwanyuen, dean of engineering at Kasetsart University, told The Nation yesterday.

For example, the riverside dykes, instead of protecting the city, helped raised the river level and increase the current speed.

“I have seen that the Tha Chin River’s bottleneck was not given attention and dredged by any authority to improve discharge capacity. They just dredged somewhere else, which was not the obstacle to flood drainage,” he said.

Besides, the Bt120-billion scheme didn’t link with the Bt350-billion water management and flood prevention scheme, which is undergoing public hearings before contracts can be signed with the four bid-winning contractors, he said.

Apichart Anukularmphai, chairman of the Water and Flood Management Commission’s committee on academic affairs, said that although the Bt120-billion scheme had been completed, there was no agency to monitor the equipment and project effectiveness.

Suthep Noipairoj, deputy chief for operations and maintenance at the Irrigation Department, insisted the dykes and sluice gates built by his department along the Chao Phraya River could be used to prevent floods effectively.

“The dykes can still do their job in preventing floods this year,” he said.

Maitree Pititanon, director of the Ayutthaya Irrigation Project, said all of the flood-handling equipment and civil works in the area were restored under the Bt120-billion scheme and could be used to prevent flooding.

For example, this year his agency diverted floodwater into the four retention areas covering over 100,000 rai of land – Thung Bang Ban 1, Thung Ban 2, Thung Phak Hai and Thung Maharat. The roads, now raised by more than three metres, were used as barriers to control the direction and block floodwaters, he added.

Deputy Transport Minister Pong Chewananth said his office spent over Bt7.5 billion to construct road networks to be used as flood embankments in Bangkok and nearby cities along both sides of the Chao Phraya River.

On the eastern bank, roads were elevated by over 50 centimetres above the 2011 flood level and a dyke was also installed along the roads.

On the western bank, the elevated road extended from the Phraya Banlue Canal to the Tha Chin River and Mahasawat Canal.

“The road construction is nearly completed and I’m sure they can be used to prevent floods this year,” he said.

Sirichai Kunanopparat, former deputy director-general of the Water Resources Department, said the department had received Bt5.8 billion to improve the discharge capacity of water resources and purchase over 200 pumps to help drain water.

The infrastructure could be used to prevent floods, he said

PHUKET: A pickup carrying Laotian migrant workers skidded off a road and crashed into a tree in Buri Ram yesterday morning, killing 17 people on board, including the driver and two heavily pregnant women. Seven others were also injured, six of them seriously.

Passenger Phu Liamwonglad, 30, was the only person in a fit enough condition to give a statment to police.

“There were 24 people on board including the driver,” he said, adding that he and his wife paid more than Bt2,000 to hitch a ride in the pickup from Samut Prakan to the border province of Ubon Ratchathani. They were heading home to Laos.

The driver, identified as Chawalit Thavornkham, 34, is believed to have taken an alternative route to reach the border checkpoint in order to avoid police detection.

“The main road is more convenient, but there are police checkpoints,” a source said.

Buri Ram’s deputy police chief Colonel Prayut Phokaeokul said a methamphetamine tablet was found on Chawalit’s body, as well as a bottle of alcohol next to his seat.