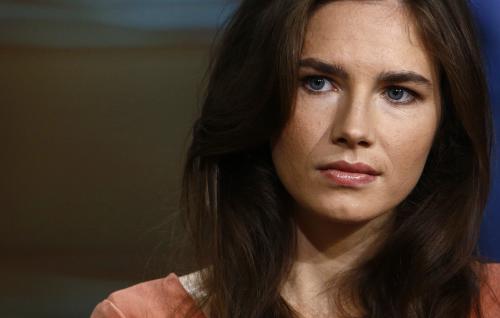 
Knox and Sollecito convicted again of Briton’s 2007 murder
Reuters / Phuket Gazette
PHUKET: American student Amanda Knox and her former Italian boyfriend Raffaele Sollecito were found guilty on Thursday for the second time of the 2007 murder of Briton Meredith Kercher, in a retrial that reversed an earlier appeal judgment.

The verdict, after 12 hours of deliberations, confirmed Knox and Sollecito’s original 2009 conviction. Knox’s sentence was increased to 28 years and six months and Sollecito was sentenced to 25 years. Knox did not attend the retrial, however, having gone home to the United States after the previous appeal.

“I am frightened and saddened by this unjust verdict. Having been found innocent before, I expected better from the Italian justice system,” Knox said in a statement.

Sollecito’s lawyer Giulia Bongiorno confirmed that her client would appeal to Italy’s highest court, and Knox’s lawyer Carlo Dalla Vedova said he was “stunned”. The court will publish the reasons for its verdict in 90 days.

For Kercher’s family, who had pushed to have the appeal verdict overturned, the reaction was equally raw.

“We didn’t know what to expect. We are still in shock,” said Stephanie Kercher, Meredith’s sister, after the ruling was read.

If final appeals are heard, neither Knox nor Sollecito, who was banned from leaving Italy, would face arrest or jail time until a final verdict by the highest court.

Knox, who is in the United States and would have to be extradited to serve her sentence, attacked the “overzealous and intransigent prosecution” and “prejudiced and narrow-minded investigation” and said she had been wrongfully prosecuted.

Gabriele Giambrone, managing partner of Anglo-Italian law firm Giambrone Law, said it was “very unlikely” Knox would be extradited to serve her sentence.

“The U.S. will do everything to protect their own citizens, they will mount every challenge possible so I don’t think she’ll serve any time in an Italian jail,” said Giambrone, who is not involved in the case.

The U.S. State Department declined comment on the matter, given “that that there is room for appeal in this case.”

Legal experts estimate the case could continue until the end of 2015, although it could be brought forward if fast-tracked.

Kercher, 21, was found stabbed to death in her bedroom in the apartment she shared with Knox in the Umbrian city of Perugia in 2007, where the two were students.

Investigators quickly pointed to Knox and Sollecito as suspects, building a narrative that the two killed Kercher in a sex game gone awry. Both were convicted in 2009 and spent four years in prison.

They were cleared on appeal, but Italy’s highest court last year quashed that verdict due to “inconsistencies” and ordered a repeat of the appeal trial. It was this trial that concluded on Thursday.

From the start, the case, one of the highest-profile murder trials in recent Italian history, has been played out as much in the media as in court, with bloggers and journalists sifting through evidence and weighing in for or against Knox and Sollecito.

Initially portrayed as a sex-obsessed party girl, Knox has seen a steady transformation of her image, helped by a sophisticated publicity machine that has portrayed her as a victim of a faulty justice system.

Knox’s lawyers have made stinging criticisms of police procedures, the handling of evidence from the crime scene and the conduct of the prosecution.

They argued that only one person is guilty of the murder: Ivory Coast-born Rudy Guede, who is serving a 16-year sentence for sexually assaulting and stabbing Kercher.

His trial found that he did not act alone because of the number and variety of Kercher’s more than 40 wounds.

While the initial case had argued that Knox and Sollecito killed Kercher in a sex game gone awry, the prosecution has moved away from this interpretation in the current appeal.

The retrial has focused on a re-examination of DNA evidence.

In closing defence arguments, Sollecito’s lawyer argued that a trace of his client’s DNA on a metal hook on Kercher’s bra clasp was there due to contamination, because it was not collected from the crime scene until more than a month after the murder and was repeatedly touched.

The defence and prosecution contest whether Kercher’s DNA was on the blade of a kitchen knife from Sollecito’s apartment, which had been used by Knox.