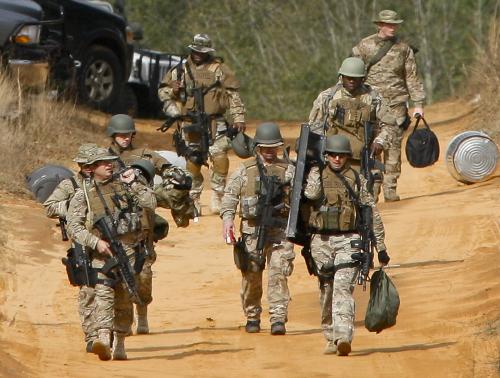 After a standoff of more than six days, FBI agents struck the bunker when they feared the kidnapped kindergarten student was in “imminent danger,” said Steve Richardson, special agent in charge in Mobile.

Authorities previously had thanked the suspect, identified as 65-year-old Jimmy Lee Dykes, for allowing them to deliver medication, colouring books and toys to the boy, who is due to celebrate his birthday on Wednesday.

But negotiations deteriorated in the 24 hours before agents rescued him, Richardson said during a nationally televised news conference.

It was not immediately clear how Dykes died.

The standoff gripped a rural corner of southeast Alabama with dread, shuttering local schools and prompting prayers and vigils for the boy identified only as Ethan.

By all accounts, Dykes had taken him from the bus at random, reinforcing concerns that have been raised about U.S. school safety and gun violence since the December shooting deaths of 20 children and six adults at a Connecticut elementary school.

The drama near Midland City, Alabama, began when Dykes, a retired trucker and veteran of the war in Vietnam, boarded a school bus ferrying more than 20 children home from school last Tuesday and demanded the driver let a student off the bus.

Dykes then fled with the child to a homemade bunker on the man’s property off a dirt road.

The child was being treated on Monday at a local hospital but appeared physically unharmed, Richardson said. He is said to suffer from Asperger’s Syndrome and attention deficit-hyperactivity disorder.

A local law enforcement source said a stun or flash grenade was detonated as part of the operation to free the boy but further details were not immediately released.

Law enforcement officials had offered few insights about Dykes and their negotiations with him ahead of the rescue just after 3 p.m.

“Based on our discussion with Mr. Dykes, he feels like he has a story that’s important to him, although it’s very complex. And we try to make a safe environment for all for that,” Olson said, without elaborating.

According to neighbours, the notoriously reclusive Dykes moved into the Midland City area about two years ago and was often seen patrolling the property where he lived in a trailer with a gun and flashlight at night.

He had been due to appear for a bench trial last Wednesday after his recent arrest on a menacing charge involving one of his neighbours.