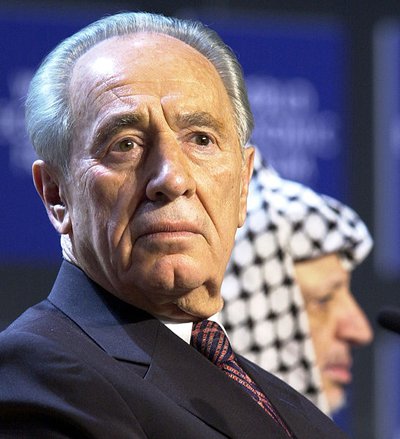 Obama to honor Israel’s Peres with Medal of Freedom

Obama made the announcement at the American Israel Political Action Committee (AIPAC) Policy Conference, the largest gathering of the pro-Israel movement, in Washington, D.C. He praised Peres, who has led Israel since becoming president in July 2007, as having fought for Israel’s independence and for peace and security.

“As a member of the Haganah and a member of the Knesset, as a Minister of Defense and Foreign Affairs, as a Prime Minister and as President — Shimon helped build the nation that thrives today: the Jewish state of Israel,” Obama said as he announced the award. “But beyond these extraordinary achievements, he has also been a powerful moral voice that reminds us that right makes might — not the other way around.”

Obama said Peres has lived to the story of the Jewish people, recalling the Israeli leader’s remarks previously that ‘slings, arrows and gas chambers can annihilate man, but cannot destroy human values, dignity, and freedom.’ “He has taught us to ask more of ourselves, and to empathize more with our fellow beings,” the U.S. president said. “I am grateful for his life’s work and his moral example.”

Obama said he will invite Peres to the White House this spring to present him with the Presidential Medal of Freedom, America’s highest civilian honor. “In many ways, this award is a symbol of the broader ties that bind our nations,” Obama said. “The United States and Israel share interests, but we also share those human values that Shimon spoke about: A commitment to human dignity. A belief that freedom is a right that is given to all of God’s children. An experience that shows us that democracy is the one and only form of government that can truly respond to the aspirations of citizens.”

Peres, who described Obama’s speech as the most pro-Israel speech he had ever heard from a U.S. president, said he was moved and surprised by the announcement. “This is a great honor for me and for the State of Israel,” he said. “All of my actions in the past and the present have been for the good of the citizens of Israel; as far as I am concerned, the medal belongs to them.”