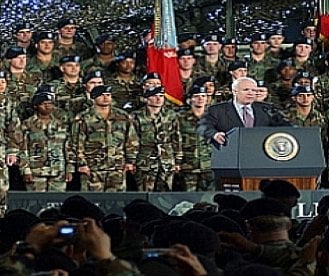 There have been increasing calls for military intervention in Syria as Assad has stepped up his bloody crackdown against a popular uprising, resulting in the deaths of up to 8,000 people since the first protests in March 2011. Last month, McCain called for the United States to help arm the rebels against the Assad government.

“It is estimated that more than 7,500 lives have been lost. The United Nations has declared that Syrian security forces are guilty of crimes against humanity, including the indiscriminate shelling of civilians, the execution of defectors, and the widespread torture of prisoners,” McCain said in a U.S. Senate floor speech. “Bashar al-Assad is now doing to Homs what his father did to Hama. Aerial photographs procured by Human Rights Watch show a city that has been laid to waste by Assad’s tanks and artillery.”

McCain, the first U.S. senator to publicly call for U.S.-led airstrikes in Syria, was also among the first U.S. officials to call for military intervention in Libya which led to the ouster of Libyan leader Muammar Gaddafi last year. “The kinds of mass atrocities that NATO intervened in Libya to prevent in Benghazi are now a reality in Homs,” McCain said. “Indeed, Syria today is the scene of some of the worst state-sponsored violence since Milosevic’s war crimes in the Balkans, or Russia’s annihilation of the Chechen city of Grozny.”

In early February, the Pentagon began a preliminary internal review of U.S. military capabilities in Syria in the event that U.S. President Barack Obama calls for them. But senior administration officials said such a review is not unusual, and Obama has repeatedly said that he believes it is possible to end the conflict without outside military intervention.

But despite escalating international pressure and sanctions, Assad has been able to continue his crackdown. “Despite a year’s worth of diplomacy backed by sanctions, Assad and his top lieutenants show no signs of giving up and taking the path into foreign exile,” McCain said. “To the contrary, they appear to be accelerating their fight to the finish. And they are doing so with the shameless support of foreign governments, especially in Russia, China, and Iran.”

The UN General Assembly passed a resolution last month which strongly condemned the continued ‘widespread and systematic’ human rights violations by the Syrian authorities and demanded that the Syrian government immediately ceases all violence and protects its people. But the UN Security Council, which has significantly more power, has failed to approve any significant statements due to opposition from Russia and China.

“The Security Council is totally shut down as an avenue for increased pressure,” McCain said, acknowledging that there will be no UN Security Council mandate in the event of a military operation against the Syrian regime. “Russia and China took that option off the table long ago.”

But McCain said the United States and other nations can launch a military operation without support from the UN Security Council. “NATO took military action to save Kosovo in 1999 without formal UN authorization,” he said. “There is no reason why the Arab League, or NATO, or a leading coalition within the Friends of Syria contact group, or all of them speaking in unison, could not provide a similar international mandate for military measures to save Syria today.”

“What opposition groups in Syria need most urgently is relief from Assad’s tank and artillery sieges in the many cities that are still contested. Homs is lost for now, but Idlib, and Hama, and Qusayr, and Deraa, and other cities in Syria could still be saved,” McCain said. “But time is running out. Assad’s forces are on the march. Providing military assistance to the Free Syrian Army and other opposition groups is necessary, but at this late hour, that alone will not be sufficient to stop the slaughter and save innocent lives. The only realistic way to do so is with foreign airpower.”

McCain, who was defeated by Obama in the 2008 presidential election, said the U.S. should lead an international effort to protect population centers in Syria through airstrikes on Assed’s forces and by taking out air defenses in at least a part of the country. “The ultimate goal of airstrikes should be to establish and defend safe havens in Syria, especially in the north, in which opposition forces can organize and plan their political and military activities against Assad,” he said. “These safe havens could serve as platforms for the delivery of humanitarian and military assistance. These safe havens could also help the Free Syrian Army and other armed groups in Syria to train and organize themselves into more cohesive and effective military forces, likely with the assistance of foreign partners.”

Thousands of people, mostly civilians, have been killed since the uprising – part of the broader Arab Spring movement across North Africa and the Middle East – began almost a year ago. More than 3,800 people have died according to government figures, but opposition activists claim the actual number has already surpassed 8,000.

The attack happened just after 5pm local time when a suicide bomber blew himself up outside the third entrance gate to Bagram Airfield, one of the largest U.S. military bases in Afghanistan. The base is located near the ancient city of Bagram in Parwan province.

A provincial spokesman said two Afghan workers were killed in the attack while five others were injured, including three Afghan civilians and three service members with the NATO-led International Security Assistance Force (ISAF). The blast reportedly damaged an ISAF vehicle which was parked at the entrance.

Taliban spokesman Zabihullah Mujahid claimed responsibility for the attack, adding that it was in retaliation for the alleged burning of Qurans at the U.S. base. “The heroic martyrdom-seeking Mujahid of the Islamic Emirate (Taliban), Ahmad drove up to the third gate of the airbase and detonated his bomb-laden car at a fairly large group of the American troops who had just returned from a patrol mission,” he said.

Mujahid added: “The attack was in revenge for the burning of the copies of Holy Quran in the very base by U.S. terrorists as anti-U.S. fury has deepened significantly, triggering a series of widespread protests across the country since this worst act of blasphemy occurred.”

U.S. troops have been accused of burning Qurans at the Bagram Airbase, triggering a series of violent protests across Afghanistan which have left dozens of people killed. Six U.S. soldiers were previously killed in attacks which were claimed to be retaliation attacks, forcing ISAF to recall all military advisers from Afghan ministries.