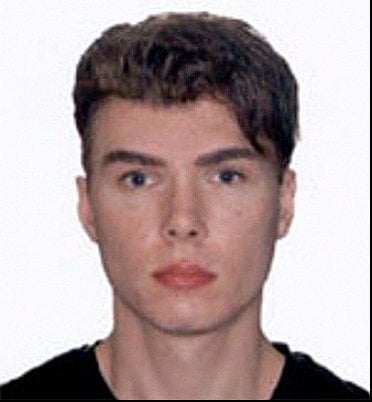 PHUKET: An international arrest warrant was issued yesterday for a Canadian man suspected of killing a man and mailing parts of his victim’s body to the Conservative and Liberal party headquarters. Meanwhile, a video believed to show the gruesome murder has surfaced online.

The investigation began on Tuesday morning when a Conservative Party employee, working at the party’s headquarters in Ottawa, called police when she noticed an overwhelming smell and blood stains while opening a package. Police found the package contained a severed human foot.

Hours later, on early Tuesday evening, workers at a Canada Post office in Ottawa discovered another suspicious package and called police. “Upon examination, it was found to contain another human body part,” Ottawa police said that evening, adding that the body part was a human hand. Officials later said the second package was addressed to the Liberal Party headquarters.

That same day, a janitor discovered a suitcase containing a torso in a pile of garbage in the Côte-des-Neiges borough of Montreal, some 165 kilometers (100 miles) east of Ottawa. Residents first noticed the suitcase last week but no one opened it until Tuesday morning when people started complaining about a stench in the air. Maggots were found crawling all over the suitcase.

But on Wednesday afternoon, the case took an unexpected turn when Montreal police issued an arrest warrant for 29-year-old Luka Rocco Magnotta and named him as the suspect in the murder investigation. Magnotta previously worked as a low-budget pornographic actor, but it was videos allegedly produced by him which made him notorious on the Internet.

The first known video to surface, published in December 2010, showed a young man placing two small kittens in a vacuum seal bag before sucking the air out of it, leaving the kittens to suffocate. Subsequent videos and photos showed the dead cats in a freezer, their corpses dismembered and the man simulating sex acts on them.

This and other videos, showing cats being eaten by a python and another being drowned in a bath tub, made Magnotta notorious among animal lovers who discovered his real name and launched an online campaign to seek his arrest and prosecution. Several rewards were issued but police seemed to have little, if any, interest in finding the person responsible.

Montreal police have confirmed Magnotta is believed to have filmed the murder, apparently referring to a so-called snuff film which appeared online last week. “[This video] is without a doubt the sickest thing you will have ever seen in your entire life,” said a posting on a website which specializes in gore videos and images. The website published the video last week and its members identified Magnotta as the likely suspect before the first package was delivered.

The video was heavily discussed in the dark corners of the Internet where websites feature such graphic content, and some visitors told Canadian media outlets they were ignored when they attempted to inform police. “It can’t be real. They have pretty good special effects these days,” a Toronto police officer allegedly told U.S. lawyer Roger Renville when he tried to report the video, according to the Toronto Sun.

The video was no longer available on the gore website, hours after Canadian police said they were attempting to remove the gruesome video, but experts believe it will be impossible to prevent it from resurfacing. The so-called Dnepropetrovsk maniacs, two Ukrainian serial killers, are also known for making video recordings of some of their murders. One of them leaked onto the Internet and remains easily available years later.

The video allegedly showing the Canadian murder shows a man, believed to be Magnotta, using an ice pick to repeatedly stab an Asian man who is tied to a bed. An analysis of the room in the video matches photos of Magnotta’s apartment, where police found a gruesome crime scene.

The nearly 11-minute video continues to show the murderer dismember his victim with a kitchen knife before sexually abusing the dismembered and decapitated corpse. One scene appears to show Magnotta eating the victim’s flesh and allowing a dog to feast on the torso. Other acts shown in the video are too disturbing to describe in this report.

The horrific events have led to a all-out national effort to find Magnotta, especially in light of a note found in one of the packages in which the killer promises to kill again. The note also indicates that up to six packages containing body parts may have been sent through the mail, although only two have been found so far.

CTV News reported yesterday that Magnotta, already subject to a Canada-wide arrest warrant, has been formally charged with 2nd degree murder and indignity to a human body. Canadian police have also issued an international arrest warrant, leading the International Criminal Police Organization (INTERPOL) to issue a so-called Red Notice to its member states around the world.

Police are concerned Magnotta may have fled Canada after he carried out the killing. A June 2009 blog post on the citizen news website DigitalJournal.com was apparently written by Magnotta and provides a step-by-step guide to disappear and never be found. “For best results under normal circumstances, a minimum of four months is really necessary to successfully carry out the heroic actions necessary to leave your old life behind,” the post said.

According to the Interpol “Red Alert” the 29-year-old Magnotta is also known as Eric Clinton Newman or Vladimir Romanov, and may have traveled to another continent with the notice circulated in all four official languages, Arabic, English, French and Spanish to its 190 member countries.