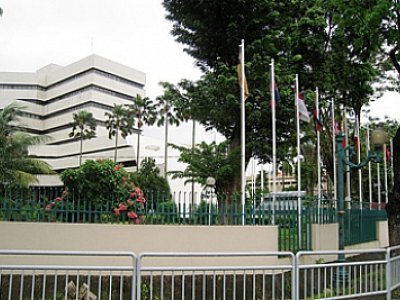 Top Asean/EU trade officials to convene in Cambodia
PHUKET (The Nation): The 2nd ASEAN-EU Business Summit will be held in Phnom Penh on April 1, to bring together entrepreneurs, private investors and public policy-makers from both the EU and ASEAN to address key issues related to ASEAN-EU trade relations, while identifying new business and investment opportunities on both sides.

ASEAN Secretary General Dr Surin Pitsuwan, the EU Commissioner for Trade, Karel de Gucht, and Cambodia’s Minister of Commerce and Chairman of the ASEAN Economic Ministers, Cham Prasidh, are hosting the event and will actively participate in the Summit, together with all other ASEAN Trade and Economic Ministers.

“I expect this year’s ASEAN-EU Business Summit to contribute significantly to the promotion of trade and investment flows between the two regions by exploring ways to reduce barriers and minimize constraints in trade and investment between the ASEAN countries and the EU common market,” stated Ambassador Jean-François Cautain, Head of the Delegation of the European Union to Cambodia.

This follows the first summit in Jakarta in May 2011.

The upcoming summit builds on previous discussions and helps to intensify business-to-business relations while promoting dialogue between governments and the private sector. The EU aims to explore new business opportunities in this fast growing region and to further improve the strong partnership that helps to support ASEAN’s economic integration.

“Business communities from both sides will utilize this second AEBS to deepen the networks that have been established. It will further enhance ASEAN-EU economic cooperation and engagement,” said Secretary General of ASEAN Surin Pitsuwan.

International business leaders are expected to convene during a day of meetings, discussions and closed door sessions on how to further improve business in the most relevant trade and investment sectors between the two economic communities. Sectorial discussions will be preceded by an open debate on promoting ASEAN-EU Business Partnerships based on responsible and sustainable business models and practices , CSR.

On April 2, there will be a Business2Business (B2B) meeting with ASEAN and European business leaders as well as leading Cambodian businessmen who network and discuss insight into and opportunities offered by the Cambodian legal services, tourism industry and the Garment industry.

Winston Set Aung, economic advisor to the president of Burma, will also give presentation on building business in the country. He will be joined by U Win Aung, president of the Union of Myanmar Federation of Chambers of Commerce and Industry, who will elaborate on this exciting market’s trend for 2012.

Time for Japan to break the vicious cycle of low pay and slumping business
PHUKET (The Nation): The outcome of this year’s spring labor offensive, known as shunto, has been bleak for Japanese, with major companies in such key industrial sectors as automobiles and electronics not offering any pay increases.

Offers regarding bi-annual bonuses have also been harsh, falling below last year’s levels at most companies.

Because of the historic appreciation of the yen and the deterioration of economic conditions overseas, the business performance of the nation’s companies has been stagnant.

Under the circumstances, many trade unions had to abandon the idea of demanding a uniform pay-scale increase, a base pay raise referred to as “base-up” in Japanese, to prioritize job security instead.

Curbs on wage hikes meant to keep companies in business and workers employed tend to dampen domestic demand, thus further worsening the national economy. This vicious cycle must be brought to an end at all costs.

All businesses have a pile of knotty problems that have been left unresolved in this respect.

In this year’s shunto, labor came to the negotiating table intending to achieve regular pay raises based on employees’ age and length of employment, known as teiki shokyu or teisho.

The Japan Business Federation (Keidanren), the country’s largest employers’ organization, expressed caution, saying it was no longer possible to consider implementation of teisho raises as a matter of course.

Most major companies, however, have managed to accept labor demands for the teisho portion of pay raises.

Salaried people in the prime of their lives have seen their living expenses increase year after year, especially for the rearing and education of their children. It is reasonable and proper for management to have paid due attention to such realities.

The pay hikes offered by some companies in this year’s shunto likely reflect corporate managers’ desire to reward, even slightly, their employees’ dedicated efforts to rebuild factories struck by the Great East Japan Earthquake and their perseverance in working late at night and early in the morning to save electricity.

However, corporate managers are naturally limited in what they can do.

Electronics giant NEC Corp presented in a meeting with its trade union today a set of proposals to cut ordinary employees’ wages, including a 4 per cent cut in monthly salaries for nine months.

Another major electronics firm, Sharp Corp, is also said to be considering a freeze on teisho raises for a certain period of time.

Although the uptrend in the yen’s exchange rate has paused in recent days, the Japanese currency is still too high from the perspective of export industries.

The economies of Europe are expected to log negative growth this year, while the swift growth of such emerging economies as China seems to be weakening. The future of overseas demand is increasingly shrouded with uncertainty.

In addition, manufacturers in China and South Korea have become increasingly formidable rivals for their Japanese counterparts, in terms of price competitiveness and product quality. International competition is bound to keep intensifying.

However, positive signs have begun to emerge. The Nikkei Stock Average at the Tokyo Stock Exchange’s First Section has climbed back above 10,000, spurred by such factors as improvement in the US economy.

Major Japanese companies are recovering from the serious blow dealt by the March 11 disaster and are expected to post higher profits in fiscal 2012, compared to huge drops in revenues for this fiscal year that ends on March 31.

We strongly hope they will have the momentum for a come-from-behind surge in business activity.

It is critically important for businesses to carve out private-sector fields with high growth potential to ensure greater corporate profitability. Now is a good time to create new demand on the strength of recovery projects from the March 11 earthquake and tsunami disaster, such as new energy-saving businesses and transportation systems.

The government, for its part, must flexibly support corporate endeavors, through such me