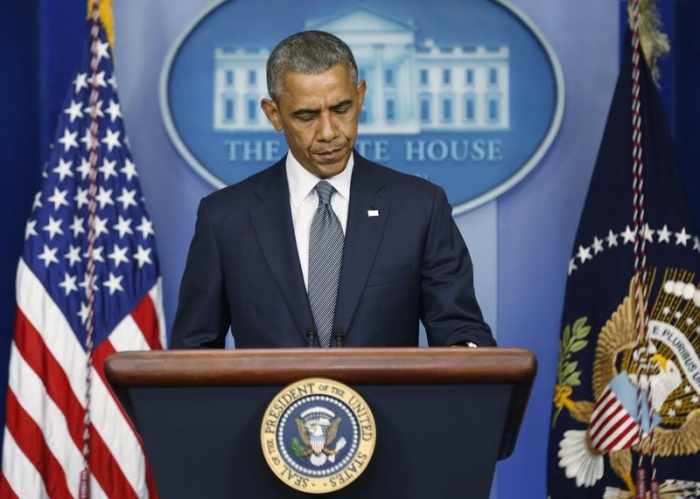 PHUKET: U.S. President Barack Obama demanded Russia stop supporting separatists in Ukraine after the downing of a Malaysian airliner by a surface-to-air missile he said was fired from rebel territory raised the prospect of more sanctions on Moscow.

Calling the deaths of almost 300 people from 11 countries “an outrage of unspeakable proportions”, Obama stopped short of directly blaming Russia for the incident, saying there must be a rapid and credible investigation. “We don’t have time for games,” he said.

International observers said gunmen stopped them observing the site properly when they got there on Friday.

More than half of the victims were Dutch, and Obama said a U.S. citizen was among the dead in what has become a pivotal incident in deteriorating relations between Russia and the West.

Obama ruled out U.S. military intervention, but said he was prepared to tighten sanctions. He also said the stakes were high for Europe, a clear call for it to copy the more robust U.S. penalties on Russia already imposed.

Russia, which Obama said was letting the rebels bring in weapons, has expressed anger at implications it was to blame, saying people should not prejudge the outcome of the inquiry.

There were no survivors from the Malaysia Airlines flight MH17 from Amsterdam to Kuala Lumpur, a Boeing 777. The United Nations said 80 of the 298 aboard were children. The deadliest attack on a commercial airliner, it scattered bodies over miles of rebel-held territory near the border with Russia.

Makeshift white flags marked where bodies lay in corn fields and among the debris. Others, stripped bare by the force of the crash, had been covered by polythene sheeting weighed down by stones, one marked with a flower in remembrance.

One pensioner told how a woman smashed though her roof. “There was a howling noise and everything started to rattle. Then objects started falling out of the sky,” said Irina Tipunova, 65. “And then I heard a roar and she landed in the kitchen.”

As U.S. investigators prepared to head to Ukraine to assist in the investigation, staff from Europe’s OSCE security body visited the site but complained that they did not have the full access they wanted.

“We encountered armed personnel who acted in a very impolite and unprofessional manner. Some of them even looked slightly intoxicated,” an OSCE spokesman said.

The scale of the disaster could prove a turning point for international pressure to resolve the crisis in Ukraine, which has killed hundreds since pro-Western protests toppled the Moscow-backed president in Kiev in February and Russia annexed the Crimea peninsula a month later.

“This outrageous event underscores that it is time for peace and security to be restored in Ukraine,” Obama said, adding that Russia had failed to use its influence to curb rebel violence.

While the West has imposed sanctions on Russia over Ukraine, the United States has been more aggressive than the European Union. Analysts say the response of Germany and other EU powers to the incident – possibly imposing more sanctions – could be crucial in deciding the next phase of the standoff with Moscow.

Some commentators even recalled Germany’s sinking of the Atlantic liner Lusitania in 1915, which helped push the United States into World War One, but outrage in the West at Thursday’s carnage is not seen as leading to military intervention.

The U.N. Security Council called for a “full, thorough and independent international investigation” into the downing of the plane and “appropriate accountability” for those responsible.

German Chancellor Angela Merkel said it was too early to decide on further sanctions before it was known exactly what had happened to the plane. Britain took a similar line but later echoed Obama in pointing the finger at the separatists.

Kiev and Moscow immediately blamed each other for the disaster, triggering a new phase in their propaganda war.

Ukraine has closed air space over the east of the country as Malaysia Airlines defended its use of a route that some other carriers had been avoiding.

More than half of the dead passengers, 189 people, were Dutch. Twenty-nine were Malaysian, 27 Australian, 12 Indonesian, 10 British, four German, four Belgian, three Filipino, one America, one Canadian, one New Zealand. Several were unidentified and some may have had dual citizenship. The 15 crew were Malaysian.

A number of those on board were traveling to an international AIDS conference in Melbourne, including Joep Lange, an influential Dutch expert.

“We lost somebody who wanted to make the world a better place,” said his friend Marcel Duyvestijn.

The loss of MH17 is the second devastating blow for Malaysia Airlines this year, following the mysterious disappearance of Flight MH370 in March, which vanished with 239 passengers and crew on board on its way from Kuala Lumpur to Beijing.

In Malaysia, there was a sense of disbelief that another airline disaster could strike so soon.

“This is a tragic day, in what has already been a tragic year, for Malaysia,” Prime Minister Najib Razak said.

International air lanes had been open in the area, though only above 32,000 feet. The Malaysia plane was flying 1,000 feet higher, at the instruction of Ukrainian air traffic control, although the airline had asked to fly at 35,000 feet.

Relatives gathered at the airport in Kuala Lumpur and the Netherlands declared a day of national mourning.

Ukraine accused pro-Moscow militants of firing a long-range, Soviet-era SA-11 ground-to-air missile. U.S. officials said they saw this as possibly the most likely cause of the disaster.

Russian President Vladimir Putin blamed Kiev for renewing its offensive against rebels two weeks ago after a ceasefire failed. The Kremlin leader called it a “tragedy” but did not say who he thought had brought the Boeing 777 down.

He also called for a “thorough and unbiased” investigation and for a ceasefire to allow for negotiations.