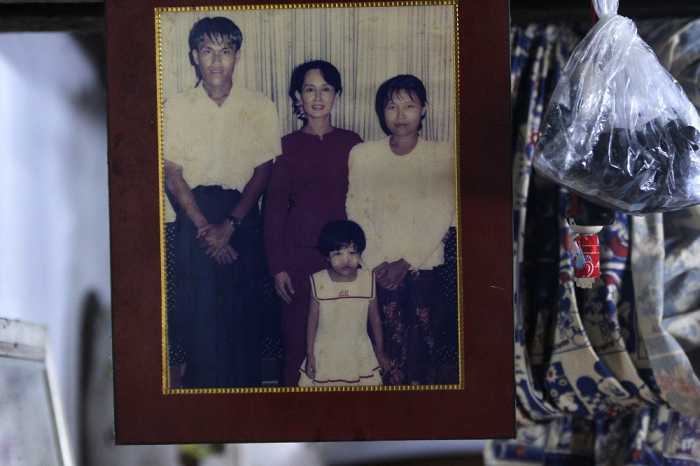 PHUKET: A Myanmar journalist who was killed in army custody this month was once a democracy activist
and a bodyguard for opposition leader Aung San Suu Kyi, his wife said on Tuesday, adding she fears she won’t be able to find out how he died because of the military’s sweeping powers.

Than Dar, the wife of slain journalist Par Gyi, said in an interview that she planned to launch a national campaign to find out what happened to her husband.

A photograph on the wall of her wooden two-storey house showed her with a smiling Par Gyi and their young daughter posing with Suu Kyi. The family has received a letter of condolence from the Nobel Peace laureate.

Par Gyi was arrested on Sept. 30 after completing a photo assignment documenting clashes between the military and the rebel Democratic Karen Benevolent Army (DKBA) and was killed on Oct. 4, the Myanmar-based Assistance Association for Political Prisoners (AAPP) said.

The AAPP disputed a statement released by the military, which said Par Gyi was shot when he tried to steal a gun from a soldier and escape after being detained because he was a member of an ethnic Karen rebel organisation.

Than Dar says she suspects he died while being tortured, leading the military to secretly bury his body. She has asked the police to exhume the body so an autopsy can be carried out to confirm the cause of death.

The government has not commented on his death.

In Washington, the U.S. State Department said Tuesday it was “deeply concerned and saddened” by reports of Par Gyi’s killing.

“We call on the government to conduct a credible and transparent investigation into the circumstances surrounding his death, and to hold the perpetrators accountable,” a department spokeswoman said in a statement.

The journalist’s death comes at a sensitive time for the Myanmar government, with U.S. President Barack Obama set to arrive in the country next month for a regional summit amid growing U.S. concerns about the human rights situation there.

Than Dar said she had formed a group of 59 social and political organizations from around the country that will work together to pressure the government to investigate the death.

“We’ll set up a committee of ordinary people, lawyers and doctors to look into how the police are handling the investigation,” she said, sitting on the floor of her house, surrounded by a half dozen supporters.

“We’ll put pressure on the police and government.”

After 49 years of military rule, a semi-civilian government took power in Myanmar in 2011 and ushered in sweeping political and economic reforms. But rights groups say the government has been cracking down on journalists over the past year, and they accuse the military of continuing to commit abuses.

Suu Kyi spent most of two decades under house arrest after a military government ignored the results of a 1990 election win by her party. She was freed in 2010 and won a by-election to parliament two years later.

Par Gyi was a member of the Tri-Color pro-democracy student organisation that served as bodyguards for Suu Kyi from 1988 to 1990, Than Dar said. While he no longer worked as a bodyguard, he remained a member of the organisation and had remained in contact with Suu Kyi, attending her birthday party last June, she said.

After Par Gyi’s death was confirmed last week, Than Dar said she went to local police in the town where he had been killed and asked for an investigation. However, she said, police were reluctant to look into the murder, admitting that they would face pressure from military authorities.

She said she was not confident the police would carry out a fair investigation.

“Everyone knows that the police can’t investigate independently,” she said. “The military controls everything here, so we have little hope.”

Than Dar, an activist who served five years of a life sentence for defamation against the government, says she visited several military units looking for her husband, who went missing on Sept. 29, but that she was unable to get any information.

She said she learned of her husband’s death on Oct 23, when a Myanmar journalist posted the news on Facebook, saying he had been murdered 19 days earlier by the military.

The next day, the military released a statement confirming the death and saying Par Gyi had been shot after seizing a weapon from a soldier in an attempt to escape. No reason was given for the secret burial or the failure to notify the family.

The military claimed last Thursday that Par Gyi was an information officer for an obscure insurgent group called the Klohtoobaw Karen Organization, and was arrested after clashes in eastern Mon state near the frontier with Thailand. Than Dar denies this, saying her husband was a journalist.

She says the DKBA has also issued a statement denying he was connected to any rebel military organization.

Various rebel groups have battled Myanmar’s central government since shortly after independence from Britain in 1948. While the government has struck ceasefires with almost all factions, clashes often flare up, undermining the government’s goal of signing a national ceasefire agreement before next
year’s elections.