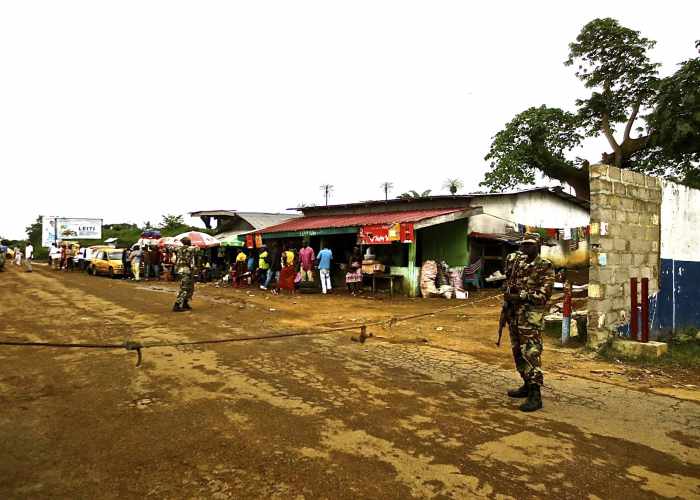 PHUKET: Liberia struggled on Monday to track down 17 suspected Ebola carriers who fled quarantine at the weekend, while the U.N. health agency urged affected West African nations to screen all departures in a bid to contain the worst outbreak of the virus.

In the Liberian capital Monrovia, police awaited a consignment of protective equipment before redeploying to West Point – a sprawling ocean-front shantytown – to reopen a quarantine centre attacked by a rock-throwing crowd on Saturday, allowing patients, who had been isolated, to get away.

“We are very, very concerned about the situation,” Information Minister Lewis Brown said, adding that 17 patients were still missing from the centre, which was thoroughly looted.

“The police had to stand down because they were concerned not to put their men at risk. They got a supply of protective equipment yesterday and my expectation is that they will redeploy today.”

With its healthcare system and government infrastructure struggling to cope, Liberia has been the country hardest-hit by the highly infectious and incurable disease, which has killed 1,145 people in four West African countries.

Officials and healthcare workers met community leaders in West Point in an effort to reopen the converted school.

Residents told Reuters they were angry that President Ellen Johnson Sirleaf’s government had brought people infected with the virus to their community. Many voiced fears that Saturday’s looting would spread contamination through the neighbourhood of corrugated shacks separated by narrow, muddy alleys.

“It felt bad. These people have put themselves at risk and the entire community at risk,” said Molly Cooper, leader of a local women’s association.

Residents also voiced anger that patients had been kept without sufficient food and water – chiming with concerns that measures in neighbouring Sierra Leone and Liberia to quarantine affected communities could lead to a humanitarian crisis.

The World Food Programme has said it would step up food shipments to some 1 million people at risk of hunger after roadblocks and quarantine measures were imposed in remote border area between Guinea, Sierra Leone and Liberia.

With international agencies scrambling to control the epidemic, medical charity Medecins Sans Frontieres (MSF) opened a 120-bed treatment site in the ELWA hospital on the outskirts of Monrovia – the biggest-ever such centre. The hospital already has an 80-bed Ebola facility and the aim was the reach a total of 300 beds, Minister Brown said.

A team of 11 Ugandan healthcare workers have also opened a treatment centre in the JFK hospital in Monrovia with 34 beds in a ward usually used for cholera treatment, the minister said.

The World Health Organization (WHO) told countries affected by the outbreak to screen people departing at international airports, seaports and major land border points and stop any with signs of the virus from travelling. It dismissed the need for any further travel restrictions. [ID:nL5N0QO2M4]

Nigeria said on Monday that the number of confirmed Ebola cases there had reached 12, up from 10 last week, but five of these had almost fully recovered. Four people have died from the virus in Nigeria, where it was transferred by a U.S. citizen who arrived by plane from Liberia. [ID:nL5N0QO1Q1]

The disease has taken a heavy toll on health workers in the region, with some 170 infected, of whom more than 80 have died.

The WHO this month gave the green light to use untested pharmaceuticals to treat Ebola patients.

However, the manufacturer of the drug, California-based Mapp Biopharmaceutical, has already said its scarce supplies have been exhausted. Officials have cautioned the public not to place too much hope in untested and scarce treatments.

In Guinea, where the outbreak was first detected in March, the government said there were just 26 confirmed cases of Ebola as of Monday, all in the Gueckedou border region. Aid workers said the main threat to Guinea was infected people crossing over the border from Sierra Leone and Liberia.

“As long as we don’t have the same level of control over the disease in the three countries, Guinea will be dependent on the situation in Sierra Leone and Liberia,” said Marc Poncin, MSF coordinator in Guinea.

Liberia’s deputy army chief of staff, Colonel Eric W. Dennis, during a visit to the border region at the weekend gave orders to soldiers to shoot at people attempting to cross into Liberia, and pledged to supply more weapons to soldiers there.

Several countries have refused to accept flights and boats from the three worst-affected countries.

However, Ivory Coast on Monday lifted a ban on vessels that had visited the affected area from docking at its ports, according to a statement from the port of Abidjan. A shipping agent said the decision was aimed mostly at Nigeria, which transports large quantities of crude oil to Ivory Coast to be refined.

Ukraine, rebels accuse each other of attacking refugee bus convoy