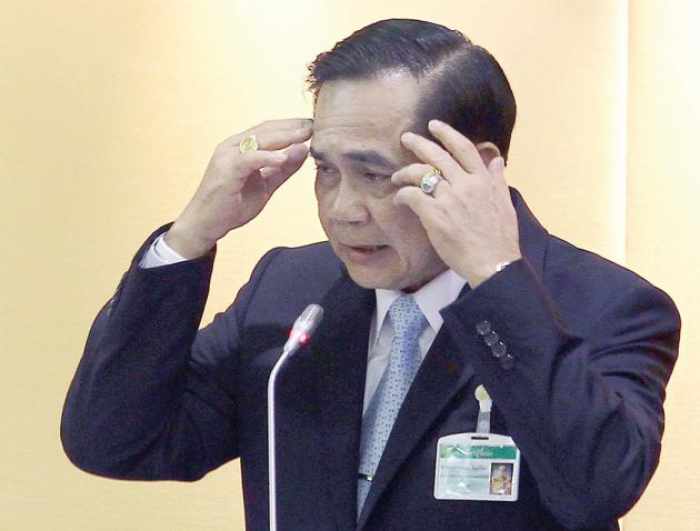 PHUKET: Junta chief Prayuth Chan-ocha told the National Legislative Assembly yesterday the proposed budget would not leave problems or debt for the country in the long run – as he would only be in power for one year.

“I don’t want to create a burden. There is no debt. Only one year [in power], I will do what should be done. We will find the problems and solutions with a clear roadmap,” he told the military-dominated NLA.

“Don’t say the NCPO can do everything. I’m not an angel. You have to help me. If I say [something], I have to take responsibility. First of all we must develop the human resources to move the country forward.”

Prayuth, chairman of the National Council for Peace and Order (NCPO), proposed the new budget bill yesterday for approval by the Assembly. The fiscal 2015 budget of Bt2.575 trillion will adhere to the principles of economic sufficiency.

The legislative assembly voted 183 in favour of supporting the bill on the first reading while three abstained. More than half of the 197 members of the Parliament are security officials.

“Nobody had any problems. Nobody disagreed,” Prayuth said.

The Army chief expects the economy to recover in the latter half of this year on the back of a clearer political situation and effective budget measures. The budget was set to be in deficit, adhering to the principles of economic sufficiency, he said.

The Budget bill for fiscal 2015, which has input from all ministries with departmental plans and projects, conformed to the 11th National Economic and Social Development Plan (2012-2016) and spending had to follow fiscal and monetary disciplines, he said.

“The construction costs should lower [by] 10-30 per cent without kickbacks,” he said. “The national strategy needed to focus on both agriculture and manufacturing. Quarterly reports of budget spending should be done,” Prayuth said.

Of the total budget, Bt2.53 trillion would be used as expenditure for state enterprises and other state agencies, and about Bt41.97 billion will be repaid for Treasury balance.

Prayuth was optimistic about a Thai economic recovery from now on, expecting GDP growth next year to range between 3.5-4.5 per cent driven by global economic recovery, improvement in global trade and Thai export expansion following estimated growth this year of 1.5-2 per cent. Meanwhile, inflation next year is projected at 1.8-2.8 per cent.

He said that the country’s current account is expected to be in surplus after exports improve and tourism recovers. Net revenue collection is estimated at Bt2.43 trillion, up 2.1 per cent year-on-year, for the 2015 fiscal year.

After tax allocation of Bt109 billion to local administrative organisations, net revenue for government expenditure is expected at Bt2.325 trillion or 17.6 per cent of gross domestic product (GDP). The fiscal year’s budget for expenditure is set at Bt2.575 trillion.

Prayuth said this year’s budget extended from the celebration of Her Royal Highness Princess Maha Chakri Sirindhorn’s fifth cycle birthday anniversary and saw solutions to and improvement of the southernmost provinces, implementation under the Asean Economic Community (AEC), prevention and suppression of corruption, and human resource development.

National budget expenditures would fully cover all financial sources, including budget, off-budget and borrowings. Reviews will be made for necessities in projects and operations. The budget for investment was set at Bt450.16 billion, which would be made for land and construction from the central area to all regions.

Some 19.5 per cent of this year’s budget will be set aside for the Ministry of Education, the highest allocation.

Strategic budget allocation extends from Bt955.92 billion for education, health care, virtue and merits, quality of life, Bt222.76 billion for state security, Bt186.24 billion for the increase of confidence and acceleration of the nation’s foundation, Bt169.11 billion for economic growth with sustainability, Bt135.12 billion for national resource allocation and environment.

Some Bt24.74 billion is set aside for scientific, technological development, research and innovation, Bt9.59 billion for foreign and international affairs, Bt354.48 billion for the nation’s good administration and Bt517.02 billion for state operations.

The extraordinary committee, consisting of 50 members, will prepare its interpretation within seven days and its report must be final by September 11. The agenda will be forwarded to the NLA meeting during September 17-18.