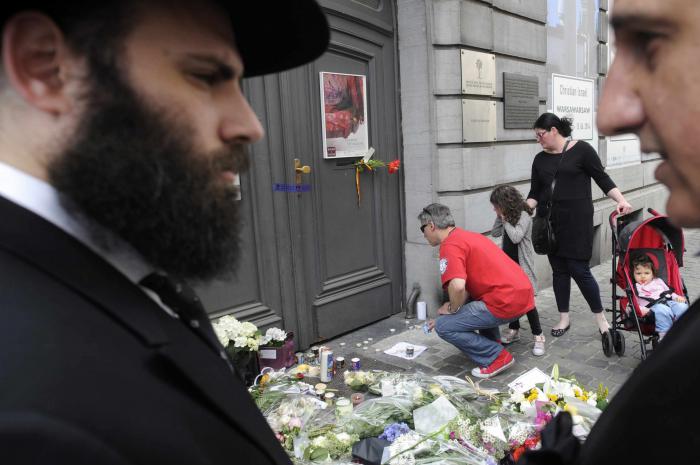 PHUKET: A gunman who killed three people at Brussels’ Jewish Museum was “cold-blooded and very determined”, Belgian officials said on Monday, leading some security experts to suggest he may have been a hitman rather than an anti-Semitic ‘lone wolf’.

An Israeli couple and a French woman were killed in the shooting in the centre of Brussels on Saturday. A Belgian man remains in critical condition in hospital.

Police released a 30-second video clip from the museum’s security cameras showing a man wearing a dark cap, sunglasses and a blue jacket enter the building, take a Kalashnikov rifle out of a bag, and shoot into a room, before calmly walking out.

“The footage shows an individual who acts in cold blood and is very determined,” said Ine Van Wymersch, spokeswoman for the Brussels prosecutors, adding that she was handing the case to federal investigators, a mark of its severity.

“The identity and nationality of the victims is an additional reason to hand the case to the federal level.”

Prosecutors said they were investigating all scenarios and would not speculate on the identity or motive of the gunman.

But some terrorism and security experts said the way in which the assailant carried out the killings suggested planning and execution by a specialist.

Edwin Bakker, professor at the Centre for Terrorism and Counterterrorism at the University of Leiden in the Netherlands, said the gunman’s calm manner indicated he had experience.

He added that no organisation had claimed responsibility for the attack, suggesting it was not an act of terrorism.

“People use the word terrorism very quickly but when I saw the images I thought this is a hitman,” Bakker said.

One of the Israeli victims, Emmanuel Riva, had formerly worked for Nativ, a government agency that played a covert role in fostering Jewish immigration from the former Soviet Union, an Israeli official said.

Along with Israel’s foreign intelligence agency, Mossad, and its domestic security equivalent, Shin Bet, the Nativ agency was under the authority of the prime minister’s office.

Friends of the couple interviewed by Israeli media said they both worked as accountants in government service.

Other analysts dismissed the notion that this was some kind of contract killing, said the daylight attack indicated it was more likely a random attack on Jews.

“I don’t think a professional hitman would have done it this way. It was a guy who was deranged, who had been planning on doing something like this and did it,” said Robert Ayers, a former U.S. intelligence officer.

Rolf Tophoven, an analyst at the Institute of Crisis Prevention in Essen, Germany, drew a parallel with the killing of two U.S. airmen at Frankfurt Airport in 2011 by a young Kosovo Albanian Muslim who had been radicalised online.

“We call this leaderless jihad, people who radicalise themselves on the Internet,” said Tophoven, laying out the ‘lone wolf’ scenario. “It would be the story of the autonomous terrorist whom nobody had on their radar screens, whom nobody knew.”

Nigeria military says knows where girls are, rules out force